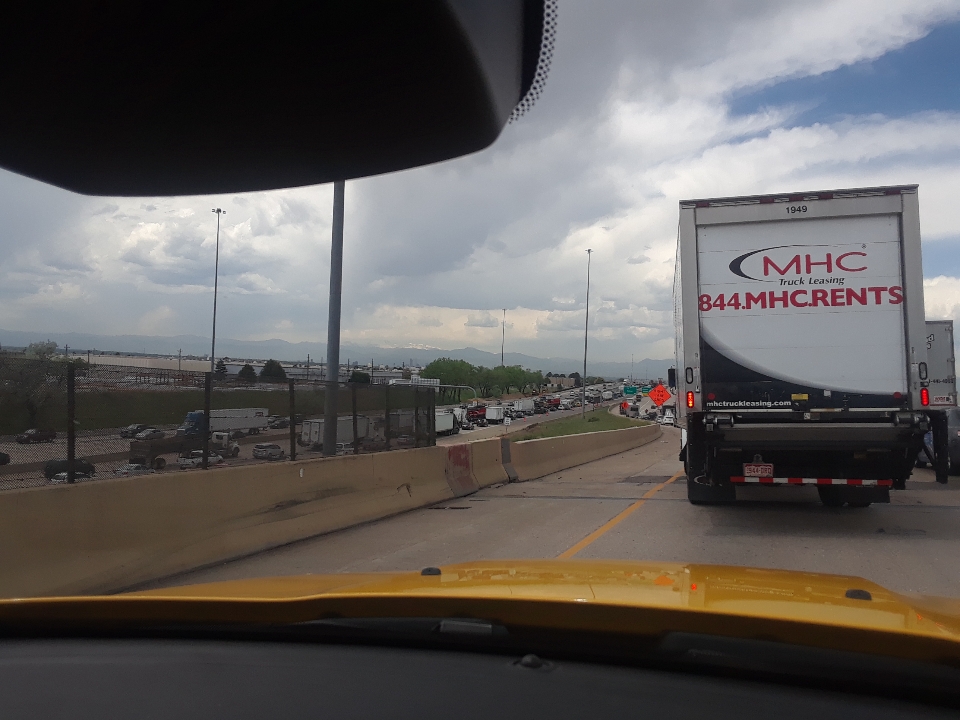 Alphabetically, getting from Arvada to Aurora is not that far. In terms of culture, temperament and ethnicity, there’s a vast gulf between the two. And, in the measurement that matters most to me, distance, they are at opposite ends of the top of the Greater Denver Metro Area.

Both my sisters and my mom live in Arvada. A doctor Lynn sees on an annual basis — well, I don’t know where he lives, but he works in Aurora. And so yesterday Lynn and I set out from Arvada, a mostly white, affluent bedroom community, to drive to Aurora, a sprawling polyglot that must be sustained primarily by the health care industry.

[A young woman I knew, after she graduated from college, got her first teaching position in Aurora. She had something like 30 kids in her classroom, and they spoke 23 different languages as their native tongues. There’s an enviable job, eh?]

To get from Arvada to Aurora, physically if not metaphysically, the most direct route is I-70. Lynn once made the mistake of scheduling her appointment during rush hour (a misnomer if ever there was one), and she listened to me complain about it so bitterly (and endlessly) that she’s never done that again. But even setting an appointment for 11:25 — no, not 11:30, 11:25 — didn’t help yesterday.

The intersection of I-70 and I-25, which runs north-south, has long been called “the Mousetrap,” probably because it’s a very confusing welter of roads going every which way. It has a notorious reputation for traffic build-ups, and at 10:30 yesterday morning it lived up to that reputation.

As we were heading east, we watched two fire trucks and an ambulance head west in the left lane of I-70, just as all three lanes on our side of the interstate slowed way down. And then those same vehicles were behind us, using the shoulder to make their way past those of us who were barely moving. It’s a weird world when the fastest way to get east is to go west first.

There was an accident up ahead of us, and three lanes of traffic were merging into one, which was the cause of the slowdown. We debated getting off I-70 and seeking an alternate route, but we were still west of downtown, which sits an an angle to the rest of the Great Denver Metro Area and makes cross-metro travel slow and difficult.

We called Terri’s husband Michael, who had saved himself the hassle of any commute at all by working from home, and he used Technology to advise us of the accident and recommend that we stay put. “Smooth sailing after that,” he promised. He was wrong, just so you know.

In the short term, he was right, and this is one of the great mysteries of traffic: where does it all go? The very second we got past the accident — a mushed-in back end of a Subaru — traffic dissipated to the point of non-existence, and we did sail along — until we got past all the downtown exits.

Perhaps they are adding lanes to the interstate. I’ve been reading for years about some plan to reconfigure I-70, but I thought that was going to be more or less directly above downtown. So I’m not sure what’s going on, but there was plenty of construction disruption the farther east we drove.

And by “drove” I mean “crawled.” I would say we were inching along, but based on later incidents we were footing, perhaps even yarding, along. But we weren’t moving as fast as anticipated, and what seemed like a departure designed to leave ample time to get to Lynn’s appointment was now turning into a nail biter.

Our exit was onto Peoria Street, and the exit was backed up with very little movement. Someone behind us made the bold decision to drive along the shoulder to exit southbound, since the majority of vehicles seemed to want to go north (and construction had choked the exit down to one lane), and when that worked, we decided to be daring too.

As we headed south we watched numerous blocks worth of traffic barely moving north, and determined that when we left, we would take I-225 to avoid that mess. Ha! I say in hindsight.

As we went south on Peoria, we saw lots of signs warning against traveling on Colfax and recommending alternate routes. Fortunately, we didn’t need to go as far as Colfax, but if we had jumped off I-70 earlier, that would have been our route. The moral of this story is: there was no way to get to the University of Colorado Health Sciences Ubercomplex in expedient fashion yesterday.

Lynn made it to her appointment with an entire minute to spare, and while we were waiting for the doctor, I noticed a sign touting all the great things you can have when you sign up for on-line access. At the bottom of the list was “Virtual visits with your physician — coming soon.” Lynn did ask about that, and while it sounds like she would meet all the criteria, her doctor said, “They keep lying to us” about when it might actually be available. She doesn’t have to see him for another year, so maybe they’ll stop lying sometime before that. We can hope.

On our way out, as often happens in this vast place, we spotted another Gunnison couple. Perhaps is was their first visit, because they seemed very intent on trying to figure out where they were going, and they didn’t see us. (We once ran into Dusty in almost that same spot a few years back.)

My next mistake was to pass up lunch at the hospital cafeteria. It’s not great food, of course, but serviceable, but I was naively thinking we could find something a bit later that might be closer to better. That was before our hour on the I-70/I-225 interchange. Where we learned what “inching along” really means.

Which of course started the second I thought, “Well, as heavy as this traffic is, this was a better choice than Peoria Street.” Wham! Dead stop on the interstate.

We inched, and inched. At one point, when we had finally reached the giant skybridge that swoops over and then merges into I-70, Lynn noticed a little rabbit between our car and the wall of the interstate. We were trapped as surely as that poor bunny, although I imagine our outcome ultimately was better than poor Bun-bun’s.

We inched our way to the Peoria Street exit and went north. Now, because a couple of screen printing vendors are along north Peoria, we are somewhat familiar with that area, although it’s built up a great deal. And we went past every fast-food option in the world: tacos, hamburgers, chicken, roast beef, sandwiches. We drove past every last one of them as we headed into Uncertainty.

We got onto 56th heading west, but that’s where our knowledge ended. It said “truck route,” so that sounded promising, and the beauty (if we can use such a word) of Denver is that the mountains are always to the west, so orientation is easy enough, but we really had no good idea of how to get back to Arvada.

Because matters weren’t complicated enough, Lynn then took a work call (while on vacation), leaving me driving on a turnpike I hadn’t been on in decades, trying to remember what roads it might intersect. Although poorly planned, we blundered onto the very road needed to get back to Terri’s and made it back after only three hours on interstates, with a mere four hours of driving left before us to get home.

But that’s another story, filled with anguish — or at least an anguished dog, aggrieved at having had to spend the day in a cool, quiet house with Michael rather than in a hot car on the interstate (what do dogs know?). It’s hardly worth repeating, so I will just point out what awaited us at the end of our long road day, and let you decide which is the Chosen Place:

One thought on “Travels with TL: Interstate Damnation”