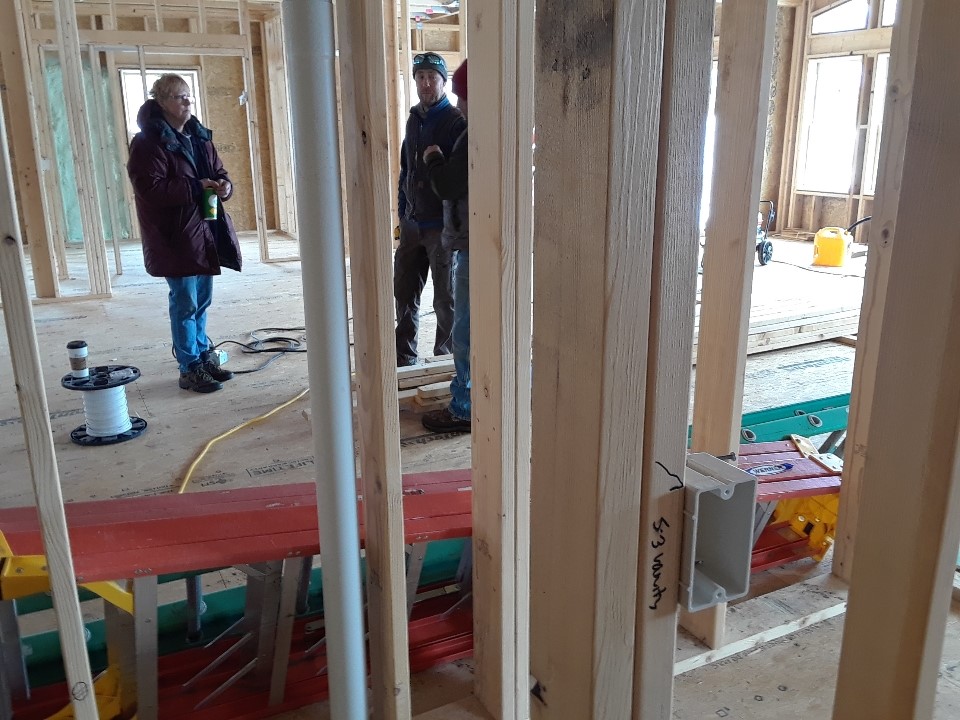 My need for an electrician over the years has been small at home, middling at work. I found a reliable work-related electrician in David Neff, who kept the equipment at Pat’s up and running for nearly two decades before he retired and moved to Maine last year. Stepping smoothly into David’s shoes is Peter Darling, owner of Argent Electric. We needed him for several things last year, including solar hook-up, new machinery, repair of old machinery, and a rooftop overhaul. He probably stopped two future electrical fires from sparking.

Peter is relatively new to the official World o’ Electricity, coming off an apprenticeship with Shawn Johnson of Legacy. I have heard Shawn’s name many times over the years, always in a positive fashion, but I hadn’t met him. Until Tuesday, when I found him standing in our house-in-progress. I have to say, he’s as impressive in real life as he is in reputation.

We were gathered for our electrical walk-through, which I was afraid would take hours and lead to arguments, but Shawn’s a pretty decisive fellow and confident in his work. But he’s also very chill about this, listened to our concerns and addressed them.

Starting with outlets. We asked about going higher on the wall (it turns out, Lynn wasn’t opposed — bad information from your correspondent), and Shawn said sure. He just advised that we do all of them in the house at the same height, because it would be aesthetically weird to do some lower. So all our outlets will be right about where our hands naturally rest while standing. We may have to be careful not to inadvertently stick fingers in them, but we won’t have to bend over to plug things in. And it made things easy when I was concerned about how an outlet would work if we built a window seat in front of it. Now the plug is above any seat we might build.

Here’s the part I liked: we don’t really have to make many decisions regarding light fixtures, because throughout the house we’re getting recessed LED lights. My mother has expressed grave concern about this, but Lynn and Dusty have been convinced from the outset that this is the way to go. I haven’t really had an opinion, but if it gets me out of making decorating decisions, I’m all for it. And Shawn said, “It’s what I have in my house.” If it’s good enough for the electrician, it ought to be good enough for us, too, eh?

It may have been too late to change our minds, anyway. While we were talking, Shawn’s unnamed assistant was on ladders, installing the portholes in bedroom ceilings. And when Lynn and I went back out yesterday to discuss dining lighting, which got forgotten the day before, all the ceiling fixtures appear to be in place, and Shawn and Helper Guy were already running wires through the studs to the boxes that proliferate. I didn’t count: we might be shy of a billion outlets, but it seems like there should be plenty.

Lynn asked about an outlet up high outside for seasonal lights. Sure, no problem, and Shawn knew right where to put it. He knew where light switches will work best. Our Good Room is going to be quite the thing, with three-way switches so that lights can be turned on from two hallways and the south door.

Shawn didn’t forget, like we would have, about lights over garage doors or on the deck. Those might be cool: they’re going up in the eaves, because we don’t have a lot of wall space, given our window mass. And he’s giving me an outside outlet for my water dish, to make all the birds happy.

[While I am typing this, I am sadly holding a text conversation with my sister Tia, who just got back from an unexpected funeral — a friend was responding to chemo treatment when her body filled with fluid — and is now boarding a plane for a funeral in New Mexico, for her dear, dear friend’s ex-husband, also a cancer victim. Plus, her dog just got diagnosed with bone cancer. I should not complain about anything. However:]

The one place where the light switch isn’t working out well is, of course, my bathroom. It can’t go on the wall where I’d like it, because there’s a pocket door behind it — and even I can see where this might be a bad mix. So it was sitting on the wall on the other side of the door, but when I went back and looked at it (actually, when I went back and took a picture of it, above), I wondered how that was going to work with the door of the cabinet right there.

Dusty wanted to know what door, and then wanted to know how a door is supposed to work right there. But I don’t really feel like leaving all my towels and medicines on display for All Who Enter, so we’re going to figure out how a door will work. (It works here.) So now the light switch is farther into the room, although — as Shawn pointed out — it will be more visible for those entering for the first time.

I guess it doesn’t matter where it goes, because I will, for the next 10 years, be reaching to the right as I come in. I suppose here is where Lynn could point out that if I would buy into her Amazon Alexa scheme, I could just say, Star Trek fashion, “Lights,” and they would come on without me blundering around for a switch like some hapless rube whacking nowhere near the piñata. But I think I’ll go the blundering route.

We also started measuring the garage yesterday, after Shawn asked Tuesday about outlets in there. Lynn has a commercial freezer and refrigerator left over from her bakery days, and while we initially thought they might fit side-by-side, they’re going to have to go on either side of a window. But then we measured her car, and this space that seems so cavernous is going to quickly fill up. Her car, which seems short, is 14 feet long, and it might be a bit of a squeeze to open the freezer door with the car in there. I think we’re going to have to look vertically for space, and so our plan to live on a single story is going to be supplanted by a series of ladders and stepstools.

But it was exciting yesterday, to see how much progress Shawn and his guy made in a single day. And we also settled, to Dusty’s immense relief, on an outside trim color, because he is running out of things for his crew to do and this is what he wants them to work on next.

We didn’t really select a color so much as an “application.” He kept referring to it as “Lifetime,” and it’s some sort of dip you put your trim pieces into. It grows darker with age, and never really requires any maintenance. He sent us to look at it on another house he built, and it looks, two years in, like a nice medium stain.

We also reviewed our sample of “French Toast” for the stucco, and voted it to be too light. But now we have color cards, so I suppose that could be our next big decision. But the decisions that needed to be made for the electrical work appear to be made, and while no one will see the bulk of Shawn’s work, it seems as though it will make the house quite elegant.

Above: Lynn confabs with Dusty and Shawn. Below: the fixtures already installed in a bedroom by Nameless Guy, who was busy working while the rest of us were talking.