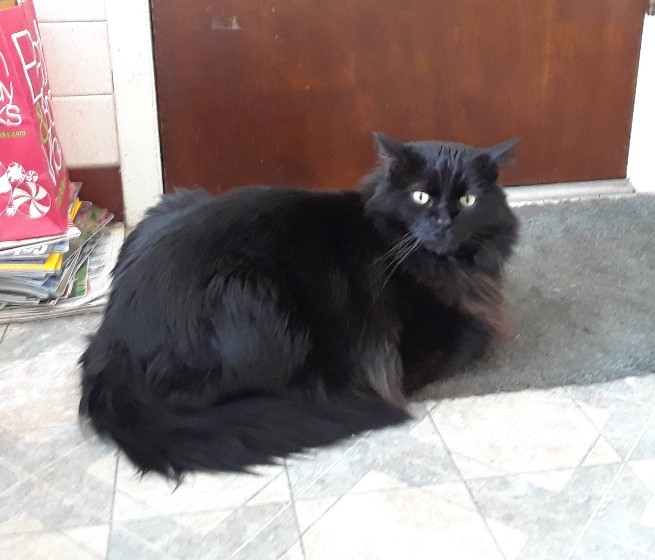 Marrakesh has lived with us for nearly two years now, and we still don’t have each other figured out.

We were down to a single cat, the ever-helpful Na Ki’o (yesterday I spilled his food, and he did his very best, rushing in to scoop up food with his mouth before I could pick it up with my fingers), and he was seeming a bit lost, even though he and Khonsu had never seemed particularly close.

In a perfect world we would have taken Ki’o down to the animal shelter to let him pick out his own cat, but we went in his stead. We came back with Marrakesh (like Ki’o, he arrived with a much more mundane name), a giant long-hair who carries his tail in an upright position. (British long-hair? Maine Coon? Higgledy-piggledy?) Keshie was a fairly svelte 15 pounds upon joining our family; he’s probably closer to 17 these days, but still not overweight.

His backstory seems a bit convoluted, but what we gathered is that he might have been in a house fire, which then left his owner homeless and living in a shed in Montrose. The man decided he couldn’t care adequately for his cats and relinquished them, somehow to the Gunnison shelter.

But I’m not convinced that Marrakesh was leading a life of deprivation. He’s rather particular about what he eats, and I would have expected a homeless cat to consume anything he could find. Then I think maybe he just didn’t experience stray bits of hamburger, because he’s not a fan of beef, but you’d think eventually he’d develop a liking for it.

He’s generally okay with a bit of lunch meat, but most of the time just walks away from human food. Whereas Ki’o and Oz (like every other animal I’ve had) are very quick to present themselves when there’s the slightest possibility of the merest morsel of food, Marrakesh rarely expresses interest in snacks. He does like Temptations, a cat treat, and he plows through the food in his microchip-activated feeder (an attempt to keep the non-svelte Na Ki’o out), but generally, not the foodie we’ve come to expect in our animals.

He’s also not much for cuddling or pats. He does like having his head scratched, but move down past his shoulder blades and he’s over it. He’s getting better: he still won’t sit on me, but sometimes will rest between the chair arm and my leg. And for about four days last week he got on the bed during Reclining Blog Time and lay alongside me.

He and Ki’o have a funny relationship. Sometimes they tussle, and sometimes they sit near each other. Occasionally Ki’o will lick Kesh’s head. But apparently they can’t both be on the bed at the same time with me. Who am I to explain cat dynamics?

Here is Marrakesh’s defining characteristic: his is a restless soul. We can’t figure out what he’s looking for. Maybe he can’t either.

All of my cats have always been indoor-outdoor, and I never really gave it much thought, even though I read about the vast difference in life expectancies between them and indoor-only cats. Then Khonsu vanished on the morning of her 13th birthday, presumably lost to a predator, and we quit encouraging Ki’o, who needed activity to lose weight, to go outside.

But Marrakesh was a semi-feral cat who lived nowhere but the outdoors when he got here, so we made no attempt to keep him inside. And he likes to spend his day going out, coming in, giving the garage a try, sitting in front of the door like he’d like to go out, but declining once we open the door. He sits on the outside looking in, but doesn’t come in. He stands by a door and yowls. He stands downstairs and yowls. He jumps on the arm of the loveseat and bumps his head against your hand. He bumps against you in the kitchen. He is moving, moving, moving and yowling. He is a cat in motion. He is restless.

We have tried an assortment of cat entertainment, but none of it holds his attention very long, if at all. He is capable of napping in one spot for long hours at a time, shifting position occasionally but apparently not moving for food or water. But when he’s awake, he is on the move — and never quite happy being in the moment.

We have been concerned most about the coming change of venue for him. In the first place (and I should not admit this in a public forum, because it eliminates plausible denial later), the covenants, which don’t concern themselves with many things HOAs usually fuss about, specifically say, No outside cats. I’m torn, because I know Marrakesh would love roaming our acre, hunting and moving.

But it’s an acre filled with predators who would love a cat meal. I don’t know that he’d be an easy meal: he’s heavy for owl prey, and he’s pretty savvy. For instance, he has a healthy distrust of dogs, and still steers warily around Oz, who hasn’t given Kesh a second look ever. So I’d be just as happy if he could learn to be happy inside.

Lately we’ve been letting him explore the crawl space, which seems to make him happy, even if it’s sometimes only momentary. And, while it’s no Club Khonsu (she could spend hour upon hour on her favorite shelf out there), the garage seems to be holding more and more appeal for him. The new garage will be easily double this one, and the crawl space is now about 500 square feet, while the new one runs under the entire house, except for the garage.

Recently a new variable was added. Probably about a week ago Marrakesh was minding his own business on the back step when a neighbor’s dog broke free from her grasp in the alley and made its very best effort to kill Marrakesh. Kesh escaped to the large spruce tree out front, where he remained for several hours, long after I drove the dog off.

[This neighbor has had a string of dogs, each more aggressive than the last, and I would like her to not own any more dogs. It apparently was too much trouble for her to call and apologize after she got the dog home, and I should have called police, because this is a problematic pattern.]

But since Marrakesh wasn’t killed and doesn’t appear to have been physically harmed, maybe it is working out to our advantage: so far his forays outside have been limited to the front porch and are short in duration, usually when we are also outside.

He has not been a fan of cold weather, and maybe as it warms up his blood will stir and hunting instinct will override current caution. But maybe we can convince him that the Way of an Indoor Cat is a good one, especially if it turns out he can occupy himself by keeping our country garage mouse-free.

My sister Terri adopted a completely feral cat, Kona, who has transitioned quite admirably into an exclusively indoor cat. (Although completely immersed in urban life, they live near coyotes, who show up even during daylight hours.)

So maybe — slowly by slowly — if we can convince Marrakesh that sitting next to if not on humans is not as terrible as he imagined, and that a garage can be quite the clubhouse for cats, he can embrace an indoor life. It might be too much to find a balm to soothe that restless soul, but we’ll keep trying — and hopefully he will too.

Above: Kesh by the garage door. Does he want out? To stay in? We don’t know — does he? Below: Kesh can be near Oz, but doesn’t have to like him. They are on the loveseat, beloved and utilized by all three animals, as well as standing in for a mudroom — but I don’t think it’s making the transition to the new house.