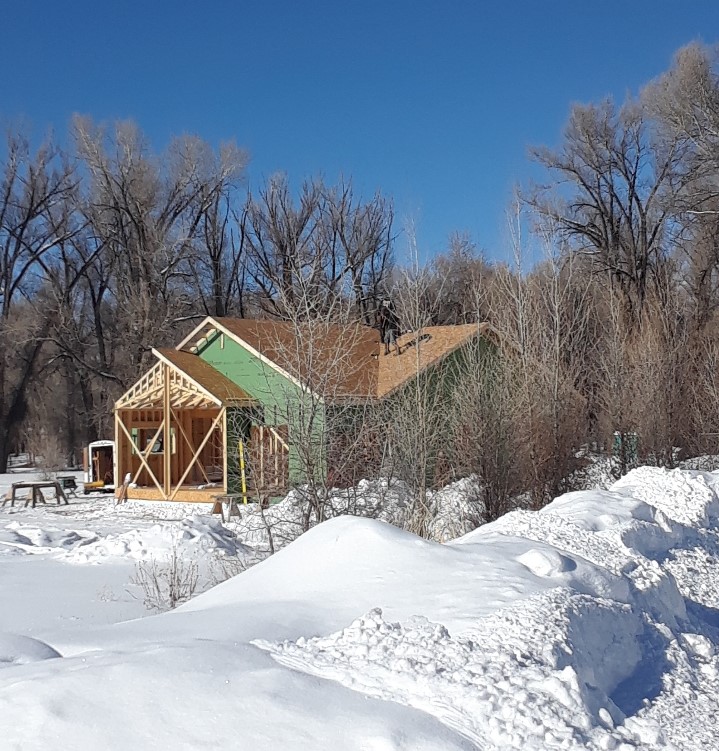 In yesterday’s truncated post, I was just starting to transition to Riverwalk, where Jered’s crew is spending this week up on the roof, covering trusses with the base layer. Neither Lynn nor I have had a chance to give this an up-close inspection yet, although she reported last night that the garage has yet to be covered.

But here is what I know about roofs (rooves?) that I didn’t before this process started: there’s a formal measurement to determine how steep it might be (no, it’s not a pitch pipe): it’s how many inches of rise the roof makes over one horizontal foot.

Originally our draftsman had it at an 8-12 pitch, but that’s just going to be unused attic space, which strikes me as wasteful. Lynn, more into the aesthetics of soaring ceilings, finds value in the sense of space — but it strikes me as a waste of resources and energy.

We haven’t been in any of our new neighbor’s houses, but while walking with Oz after dark, you can see that a couple of them have high ceilings that are going to make us look like the poor stepchild of the neighborhood. I think the vault in our Good Room is going to be 14 feet; by comparison, I think that one house has an entire story’s-worth of extra height.

And the Meeuwsen house currently under construction has a mansard roof that is immense. I don’t think, given how much bracing exists on the trusses, that any of this will be functional space — it’s just extremely tall.

But I liked the way our roof looked when Oz and I did our Tuesday drive-by, even as it advertises that ours will not be a palatial abode.

Now, I did lower myself right out of optimal solar angles, so if we go with solar panels, as I really want to, they may have to be angled more sharply than the roof. Although now that I see how much of the south-facing roof really runs east-west, I’ll probably have to have Lena of Nunatak come back and re-evaluate, since we’re no longer just on paper.

Lena, prior to her first site visit, had suggested a ground-mounted rack, but anywhere we put one would be within view of our bank of windows that have yet to be framed (the big opening in the photo above). And we would be looking at the backside, or guts. Which might be novel, but not nearly as scenic as our pond.

While I was out at the lot on Tuesday, trying to find a way through the trees for a photo without venturing into deep snow, I recalled a falling-off-the-roof story without a bad ending.

It must have been the winter of 1974-75, because I believe earlier that year was when Taggie, the best dog ever, came into my life. Back in those days, the wisdom was that you let a female dog go into heat once before spaying her, and Tag came into heat sometime that winter.

This invited the ugliest hound-dog from somewhere down the street (never seen before nor after) to take up residence on our front porch. And if he couldn’t have this female dog, he had no qualms about attempting to ride whatever child might be in his vicinity.

It must have snowed a lot that year, and I’m guessing Bruce Bartleson must have decided to shovel off some of his roof next door. So here were kids, and here was a ladder, and there was a deep pile of snow that had been shoveled off the back of the roof: pretty soon we were all climbing up the front of the house to the roof (which probably has a 3-, possibly 4-12 pitch), walking over the ridge and then sliding down the backside to land in the snow below.

But then this pesky dog showed up. I don’t even know who among us or how many were engaged in roof jumping, but suddenly this dog kept leaping at me– and would not give up, no matter what I tried. In desperation, I scaled the ladder as quickly as I could. And then there was the dog, scaling the ladder right behind me. Like he did it every day. So I ran over the top of the roof and slid off to complete my escape. But while I was still in a breathless heap, I heard someone shout — and looked up to see the shadow of a dog plummeting straight toward me.

I’m sure I rolled out of the way, and I believe the dog emerged unharmed, as did I, but I don’t recall any other details of note, just this looming shadow of doom headed straight for me. I believe we had to resort to going inside to get the dog to leave us alone, and Taggie was carted off to be spayed as soon as possible.

I doubt this is the end of my roof stories — in fact, I can just now recall the night we tried to sleep on the roof (what were our parents thinking, allowing that?) — but I imagine we are all sated for now. And so I leave the last word up to the experts on the matter:

One thought on “Up on the Roof: The Rest of the Story”