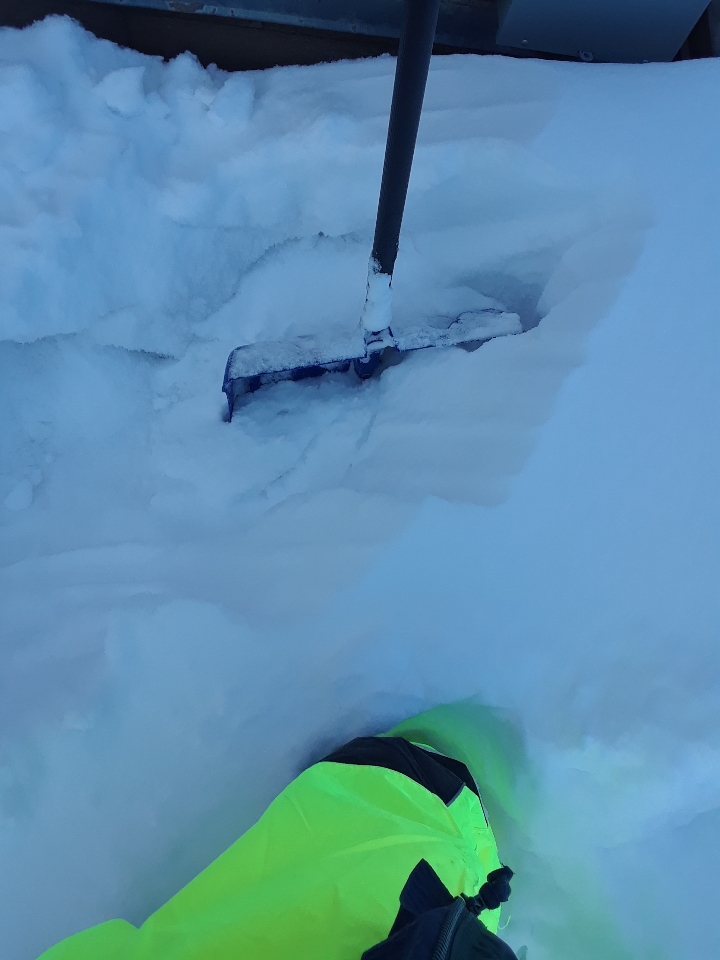 Yesterday at work Ben and I braved the elements to tackle the roof. Okay, so there weren’t that many elements to tackle. The sun was shining; it was warm enough that I left a base layer behind and he took off his cap, and the cold wind that moved in later had yet to put in an appearance. (Can wind appear, really? Had yet to be felt would be more accurate, I suppose.)

We went with the intention to help save the planet, by uncovering solar panels. But there were drains and low-lying vents to clear first — and it turned out our “normal” snowpack is knee-deep in most places on the roof. At some point, we start considering snow weight on a flat roof.

It was probably the Winter of Big Snow (2008-09) when that roof was last given a full clearing. My landlord, Dan Rundell, and I did most of the work back then. He found someone in need of some work who offered to help, but Mr. Rundell made the mistake of giving the guy a pair of boots before the job — and this “good” Samaritan immediately vanished.

We’re not to that point yet this year, but it was much deeper than I was expecting. The little solar panel that turns an attic fan above our production area had completely vanished under cover, and then was iced over once we found it.

The top three big solar panels had a layer of snow that was wrinkling down already from the sun, but the three below them were under snow which was over an inch or more of ice. So while we waited for the sun to heat the panels enough to break free of ice, we tackled parts of the roof.

Or Ben did. He is fury in motion once you hand him a snow shovel, clearing swaths both wide and narrow in short time. Here is how I shovel anymore: Push two scoops off the roof, pause. Two scoops, pause. Two scoops, lean on the handle and rest. Stop to take photos. Wander back over to the solar panels to chip at ice. Talk to members of the college — I mean, university — class passing below.

Eventually I got the panels cleared, and you could see the difference that made on our Enlighten page pretty much immediately. After getting no more than three kilowatts of production on any given day this month, yesterday (when the sun did finally shine for an entire day) we got to 7.23 kWh. That’s enough to light the Eiffel Tower for two whole minutes.

What can I say? Saving the planet one Eiffel bulb at a time.

Ben also exposed the entire north edge of this flat roof, where it gets the bulk of sunshine. Our hope is that exposing the brown roof, the sun might reflect back and naturally evaporate/drain some of the rest of this foot-plus of snow so that we don’t have to shovel the entire space.

And when we got back to Earth, I invoked owner/old guy privilege and sent James out in my place to clear the sidewalk.

In the meantime, while Ben and I were clearing off a roof, at Riverwalk the crew was putting a roof on our house. Oz and I took the long way home for lunch, swinging by the construction site to take a look.

[Okay, it is now extremely late, and I am only about halfway through this. I slept late because of shoveling topped by my first tap class of a new semester (sadly, without any of my familiar peeps, although Sam is supposed to show up in a couple of weeks), and then I talked fireplace framing with Dusty. My options now are to show up an hour late to work, try to do this at lunch, or put it on hold until tomorrow. I think you’re all just going to have to wait. Hope that doesn’t ruin your day and all.]

Above: That’s my knee, sunk in roof snow. Check out how glowy my pants make everything around them.

2 thoughts on “Up on the Roof”