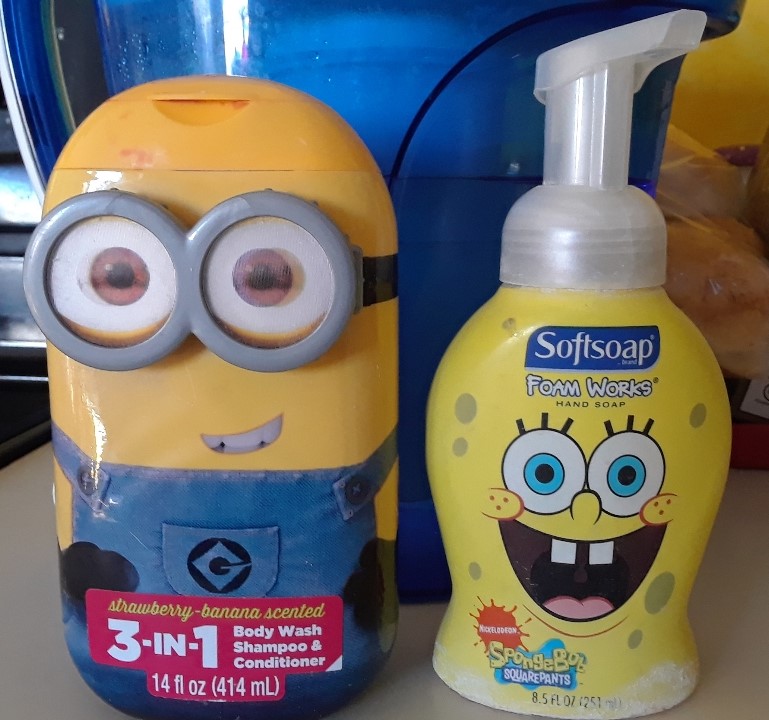 We’ve covered my attraction to SpongeBob SquarePants. But what you may not know — although I doubt it will surprise you — is that I also have a thing for Minions, the little talking pill capsules from the Despicable Me movies. They are also yellow, which may or may not be a coincidence.

I hadn’t paid any attention to Despicable Me until it came out on DVD. My co-worker Rachelle, since gone on to other towns and jobs, had loaned her copy to someone who had returned it to her at work, and it was sitting on her desk. She told me I might like it and let me borrow it.

I had no idea what to expect, but I quite enjoyed the movie. So much that I watched it twice more before I gave Rachelle her movie back. Then Lynn bought me my own copy, which I still watch from time to time. There were sequels, of course, including one just about the Minions, and they’re all right, but they lack the utter delight of the first movie, which is about a rather hapless anti-hero finding his warm and fuzzy side through his acquaintance with three neglected orphan girls.

Along the way are his Minions, these uncountable little yellow creatures who live underneath his house (in his multi-level mad-scientist laboratory) without any explanation at all. They are just there. Some of them have one eye; others have two; every one of them comes with a name (Bob, Kevin, Stuart); and all of them just roll with whatever gets tossed at them, including one who gets used to test an anti-gravity potion and who goes on to float endlessly through space, quite unaffected by his predicament.

We had used the word “minions” at Pat’s Screen Printing for many years prior to its appropriation by Illumination Entertainment. In fact, it’s one of titles for the process in how we track jobs around the shop. When a job goes to “minions,” it is printed but not yet folded, counted and boxed.

[Okay, it’s probably my cold, but “minions” is starting to lose any meaning for me.]

I don’t know if it means anything that they’re yellow. Yellow is Lynn’s favorite color. Mine is blue, like the Toy Story aliens’ spacesuits. But it does mean people buy me a lot of yellow tchotchkes, like those pictured above.

The Minion shampoo/body wash/conditioner has been sitting on the floor of my bathroom, an unused but admired gift, when recently my Suave for Kids Star Wars bottle emptied —

I would like to take a moment to swerve to hair care products. I used to use a shampoo that my barber told me was leaving wax on my hair. At the time he recommended an Aveeno product, which I dutifully purchased until whatever salon in town I was getting it from dropped its Aveeno contract and told me “maybe” I could get it in Crested Butte. There was an entire Aveeno store near my sister Terri, so I tried shopping there a couple of times, but I didn’t look like the rest of their clientele, which confused them, and then when they didn’t have the this-will-last-until-my-next-trip-to-Denver size, I called it quits. By then my barber was recommending basic Suave, and why settle for boring when you can buy the appley-green scent with a happy little elephant on the bottle? But then they replaced the elephant with an awful-looking octopus, so I went with the nearby Star Wars bottle. You had no idea my hair care was this complicated, did you?

— so I decided to give the Minion (not Suave brand) a try. It is strawberry-banana scented (sort of), offers no lathering capability whatsoever, and I find it unfortunate that the liquid that comes out of the top of the Minion’s head is red, making it look like he has a perpetual scalp wound.

Which, now that we are at red, I would like to bring up my niece Ellie. Ellie is a college student, like me inasmuch as she is attending the Unirado of Coloversity (as we used to switch the bumperstickers to say), but once upon a time she was 2 years old. And her characters of choice were red: Elmo and Clifford the Big Red Dog (Clifford I can definitely get behind; Elmo is a touch squeaky for me).

Ellie and I, her parents and her Aunt Terri and Uncle Michael were all in San Diego (perhaps a Travels with TL future entry) for Thanksgiving that year when she was 2, and Ellie’s mother Tia was busy trying to teach her manners.

I don’t remember what happened, except we were around the breakfast table, and Ellie had done something not quite couth. As she was big, really big, into her Clifford those days, her mother told her, “Clifford would not want you doing that.” (Which is probably a true statement. Clifford is a rather moral fellow, but not obsequiously so.)

Ellie considered this statement (which is probably why she is pre-law in her current day), and then said, “Well, Clifford’s not here right now.”

Which was met with uproarious laughter from four of us, and a glare from Tia, who was trying to maintain supremacy in this dialogue. The rest of us weren’t helping. So she turned to another red fellow that Ellie was starting to learn about, the all-seeing, all-knowing Santa Claus, but it may have been too late. I think Ellie knew she’d  won her point — after all, everyone laughed.

[This was, however, only Ellie’s second-best line. Her greatest hit, which I did not personally witness, was the time she was asked to clean her room and off she stomped, muttering, “I have to do everything around here. Just like Cinderella.”]

Red, yellow . . . here am I am, just days after assuring you I was done talking about color. Apparently I had more to say on the issue. And probably will again. You just never know.

Oh, look! I went looking for a song from Youtube, and realized I forgot all about Wubbzy, and he’s yellow too. (I don’t have any paraphernalia, however.) And he has a pink friend, just like SpongeBob. See how educational this all is?

One thought on “The Color of Cartoons”