On Friday I got an e-mail from the real estate company we are going to use to sell our current house, Some Day.

Audrie of The Clarke Agency wished me happy holidays and wondered about the status of our house construction project. She knew it was early, and no pressure, but she has a client looking now — did we want to show our house?

As a prognosticator, I am generally a complete failure. I can’t predict the weather, my sense of popular trends is usually wrong, and my guess at to what the economy is going to do is rarely right. On the plus side, I can tell you the entire plot — and write the dialogue — of a Hallmark Christmas movie as it starts, which I’m sure is a talent unique to me.

So housing prices have turned me into a neurotic mess for the last year and a half.

I was sure, a little over a decade ago, that housing prices in this country were not sustainable. I was in an activist group that met weekly, and that was a favorite topic of conversation. And we were right, sort of. As we all know now, the economy crashed, and hard, the root cause the gross overinflation of housing prices and the shocking ease of people finding ways to purchase well above their means.

But this was just an academic exercise for me. While many unfortunate people were living it, I was safely tucked into a house I’d had the foresight to buy when housing in Gunnison was affordable.

Okay, I had no foresight at all. I was just following the trajectory of a young professional: I went from college roommates to living on my own to tiring of renting. So I bought a house (and went back to roommates for awhile, then just me, now Lynn). The year after I bought this house, the prices in Gunnison shot up to where it would have been really difficult for me to afford a house.

And I also know that to make the new house financially viable, we need to get five times what I paid for this current house when we sell it. Isn’t that insane? Five times what this house was worth in 1993?

The late Harvey Harriman, long-time member of Gunnison’s city planning commission, once said you should spend three times your annual income on a house, if you’re buying. So Lynn and I should be okay — provided we get what we need to out of this house.

[Which saddens me, by the way. I know a young professional couple here in town who have practiced tiny living since they’ve been a couple — not by choice, but necessity — and they’re over it. They would like to buy a house. But three times their annual income will not buy them much of anything in Gunnison. I am sad that the progression to home ownership that was relatively easy for me two, three decades ago is now an onerous burden.]

So if we go back, way back — I have wobbled quite precariously this entire blog entry, you have no idea — I am horrible at prognostication, and sure that around every bend is another housing crash, which really needs to happen because housing prices really aren’t tenable, but we need to maximize our gain to cover the costs of a new house that every subcontractor bid at 10% higher than the last house our contractor finished . . . pardon me, I get very wound up.

In an ideal world, our new house would get built, we would move, clean the current house immaculately, stage it with whatever furniture Audrie deemed necessary, and then let her show it without any disruption to our lives while we sit back and entertain the many (I’m sure) offers we will receive.

But the stock market is wobbling more than I have in composing this; the Real Estate section of the Denver Post, the most rah-rah publication one can find outside of Realtor propaganda, keeps talking about a softening of the Denver market, and the R word (recession) is being flung about with more and more abandon.

So I did a mini-version of this blog entry to Audrie (aren’t you so glad you’re getting the extended-play version?) in an e-mail reply on Friday, that ended with a notation that we aren’t anywhere near show-ready. She replied that she would not be making our plan to sell public knowledge, that these are her clients and she would let them know the state of the house and see if they want to tour it — would that be all right? That would be fine, I replied.

And then this morning I checked my e-mail on my way here — and Audrie’s clients do want to see the house. Monday. As in tomorrow.

One showing doesn’t mean much, probably, except here is the other problem in Gunnison these days: there are very few homes for sale. Which is probably why Audrie is pushing to be able to show them this house.

It used to be, about 10 years ago, that if a house was listed for under $200,000 it sold quickly. A couple years ago anything under $300,000 went in a heartbeat. (This is still insane, by the way.) Now the in-town rule of thumb seems to be that if you want more than $500,000, you’re going to have to wait a few months (except the Kecks, who sold their house within a week of listing it).

But trying to find a single-family home is difficult. Even at $500,000, which is well above where ours will be listed. There is a house, just two doors up the street, that has been for sale since the fall for $329,000, so maybe I’m panicking about nothing. Audrie’s clients will come in, look right past the hardwood floor to my giant pile of unread newspapers and magazines, and back right out the front door.

But to go from an abstract, Sure, maybe we should start letting people take a look at our house, so that we can sell before the stock market crashes and takes housing prices with it, to: What time on Monday could they look at your house? Well, that’s requiring some deep breathing.

Some Day is going to be here, probably sooner than I’m ready for. There are piles of lumber next to the cee-ment pond on our lot, and young men who are far braver than Lynn (or at least, less pervious to the cold) start assembling all those piles tomorrow. And someone is coming to look at our house, to see if they would like to make it their house, Some Day.

I don’t know that I’m ready for this. 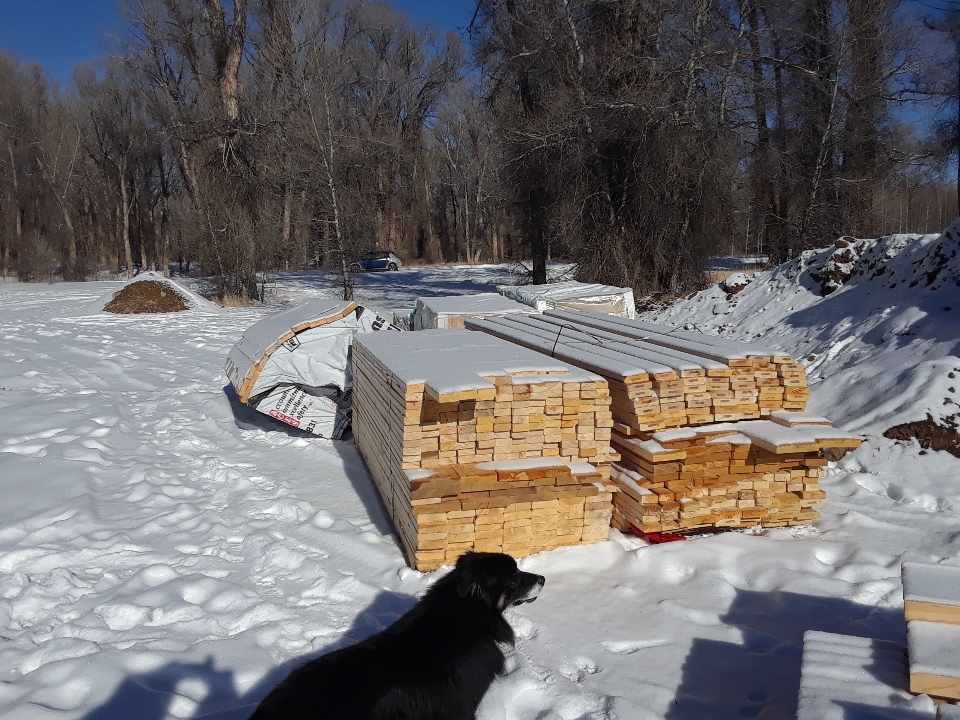