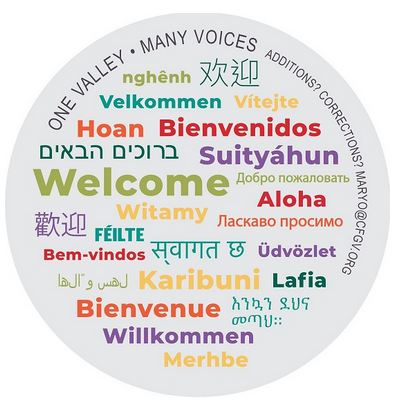 Yesterday must have been Monday, and this is why: I watered the lawn, a term I use very loosely, you understand, in the rain. There were other Monday indicators, but that was the cap on the day: there I stood, hose in hand, under a sunny sky, getting rained on.

For not having a decent cloud to fall from, the rain came down more persistently than I expected, and longer. It ended about the time I turned all the hoses off and went inside.

The day started Thursdayish enough; I was working on my blog, watching the news. And then I started thinking my mundane self-centered topic was perhaps not as appropriate as something on race in America, so I switched gears. But paused to attend to hummingbirds, and that’s when it all fell apart.

ONE HOUR — an hour! — later, hummingbird feeders were flushed of a plethora of nasty dead bugs and topped off with sugar water for the birds to fling all over the ground, and I sat down at the computer for my Small Business Development Center webinar on ripping up the plan for 2020 — only to learn the internet had crapped out.

Instead of crapping out for a minute or five per usual, it remained out for the remainder of my time at home, despite multiple resets of the modem or router or whatever they’re called these days.

It did not occur to me that the fault might be me, or more correctly, my computer, until I was still struggling at lunchtime (on my Skype-with-friends day) and Lynn asked if I had restarted my computer.

I did that, and pressed Function 6, which I have at long last drilled into my brain is the way to restore the webcam, and eventually was able to join my virtual friends — well, they’re not virtual and not virtual friends, they are friends I communed with virtually, if not virtuously.

But along the way in all this — the birds, the non-webinar, the computer (bane of my existence, an absolute necessity in the Time of Pandemia), eventually going to work — I got very little blogging done.

By this morning, I am only left with dismay, which ought to be anger, at the stark — dare we say black-and-white — contrast of the treatment of two different men in Kenosha, Wis., the unarmed man shot seven times in the back (and apparently even now handcuffed to his hospital bed despite the severing of his spinal cord) versus the fully locked and loaded teenager who had just killed two people and wounded a third, who police blew right past, only to arrest him without incident a day later.

That should make all of us angry, but apparently it doesn’t even rate mention in a campaign speech — a speech in which Joe Biden has already destroyed the country he doesn’t currently hold an elected position in.

[I would also like someone to explain to me why it is — on the eve of an unending  hurricane that’s going to require billions of socialistic federal dollars to clean up after — that socialism is so bad it will tear the very fabric of our existence to shreds, but hey you Bernie Sanders supporters (the very definition of socialists), you ought to come vote for the president, because Joe Biden will lean way too far to the left.]

As we know, I live in a very white part of the world, although not as white as it once was, which can probably be said of almost every place in the world.

I have been pondering, off and on over the last few months, what one can do in a place such as this to make it more welcoming and inclusive. I generally think it’s a hard sell, period: sure, it’s beautiful, but wages are low and housing costs are enormous. Come live here!

And while our county is hardly a melting pot, our community foundation has taken to issuing “welcome” signs using every language they know of that is native to residents of the county — and it’s a lot of languages, more than 30 at last count.

Crested Butte has taken my pondering to the civic level, with the town council taking up the racism issue in a fashion that was either glorious or acrimonious, depending on whose version you’re taking in. (I did not Zoom in to the meeting two weeks ago and can only rely on these second-hand reports, which are all over the map.)

What does seem clear in the disparate reports is that a younger council member feels quite zealous on this issue, and he may have gone on the attack after the mayor, a grizzled veteran of the Democratic trenches who may nonetheless have said, “Racism is weird.”

That racism exists around here shouldn’t be in dispute: one audience member detailed the difference between her sons and her nephew. Only the black nephew is stopped by police every single time he comes to Crested Butte, never the white sons.

What the younger council member — and I’m reasonably sure that all members of the town council are white — and others want to do is paint “Black Lives Matter” on a street somewhere in town.

While Gunnison is reportedly 88 percent white, I’m going to venture that Crested Butte is about 99.9 percent Ivory soap, with perhaps two black residents and a handful of folks from Nepal. The Buttians (bue-shens) as we like to call them, have been self-righteously proud for years that their school ranks quite highly nationally in performance, but I’m not sure they have more than a couple of English Language Learners, whose scores count right alongside other students whether they understand the test questions or not.

And in this week’s CB News, a letter writer from Gunnison called them on this.

While the Gunnison paper doesn’t have a single letter to the editor this week, Crested Butte’s has a bevy of epistles in support of the younger council member and the cause he has taken up. But two letters suggest Crested Butte may want to turn that mirror on itself.

Should the local radio station continue its annual SoulTrain fund-raiser, where white people put on afro wigs and blackface? “Maybe before we buy a bunch of paint to show how politically correct we are, we can have [that] discussion,” suggested Sandra Perrino.

Gail Sovick, of Gunnison, pointed out the problem right under their noses: the brown population that already works in Crested Butte, mostly in out-of-sight positions in the backs of kitchens and half-built houses, caring for yards and cleaning. “Then they turn around and come back home to Gunnison to live.”

Her letter is worth reading in its entirety, and she points the way forward for all of us who feel enlightened and don’t realize the problem we thought was elsewhere is already underfoot, heedlessly trampled on a daily basis. Ms. Sovick tells the Buttians to go ahead and paint their street, “But what will you have actually done to create more racial equality in your own county?”

The answer, she suggests, is reaching out to the 12-ish percent already here, specifically ask what their perceptions are and how life can be made more welcoming here.

If we’re going to ask, though, we need to be prepared to listen, really listen, and then the hard part: act. A little bit of paint is not going to whitewash this problem. 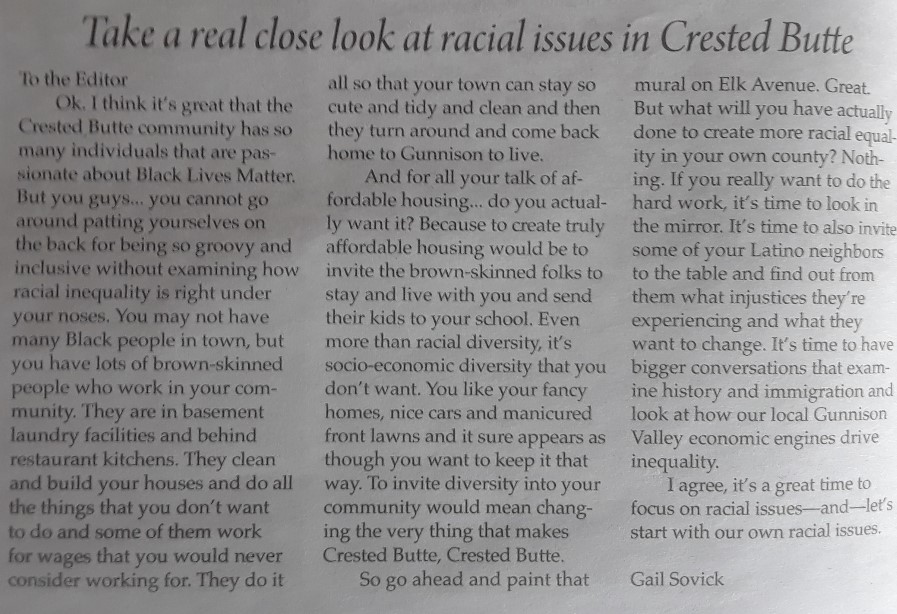