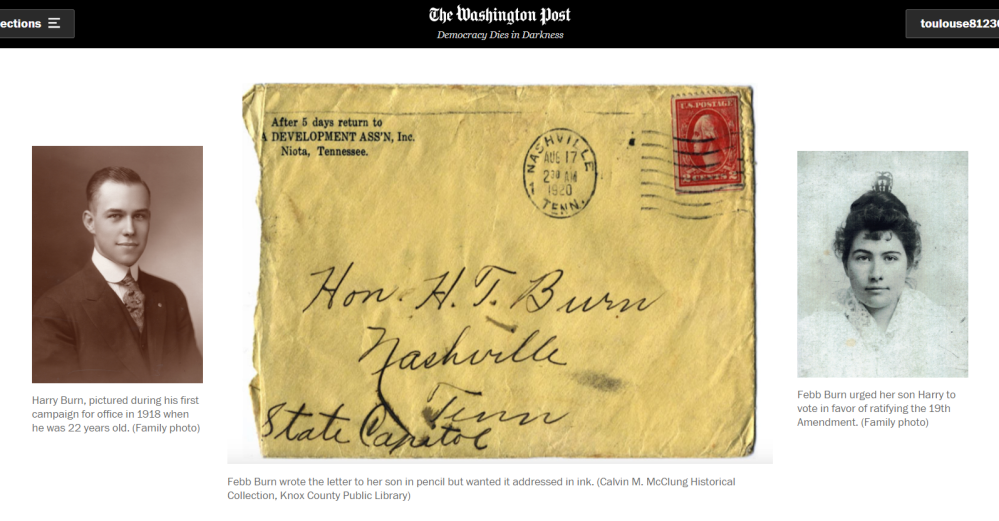 This is an easy sentence to toss out there: “In 1920, women won the right to vote.” But to get there took nine — nine! — decades of activism. And one letter from a mom to her son.

When we think of prominent suffragists —

[When I conduct coin flips at middle school volleyball matches, I use a Susan B. Anthony dollar. Before the flip, I quiz the girls to see if they know who she was. Most of them, probably wondering what this old man is doing when they’re there to play volleyball, have no idea. But one girl wrinkled her nose in thought and said, “Didn’t she work on women’s rights?” I told her to go back and tell her social studies teacher s/he’d done a good job.]

— we, or I, don’t necessarily include Febb Burn of Tennessee. Except that it turns out she wrote THE decisive piece of correspondence that broke a deadlock in the Tennessee statehouse. That matters because On This Day in History, Aug. 20, 1920, Tennessee became the 36th state to ratify the 19th Amendment to the U.S. Constitution, giving women the right to vote.

The Tennessee senate had ratified the amendment, but the state house, with 96 members, had voted twice, ending both times in a tie. They were getting ready to vote a third time when Mrs. Burn took up her pen and dropped her son a line.

At 24, Harry Burn was Tennessee’s youngest representative, and in his state’s War of the Roses, his lapel contained a red rose, signifying he planned to vote against ratification, rather than the yellow rose that meant he thought women should have the right to vote.

(Don’t ask me why they were wearing color-coded roses at all; I’m just reporting what I found on the internet. I have no idea if Tennesseans still do this, but it would be a good way to let lobbyists know where you stand on their issues.)

However, under Harry Burn’s red rose, in his jacket pocket, was a recent letter from his mother, whose name for whatever reason was Febb. Her letter was filled with news of the family and the farm back in Niota, but she also not-so-casually casually slipped in three references to suffrage. “Hurrah and vote for suffrage,” she counseled her son, “and don’t keep them in doubt.”

The young representative had to know well before this point his mother’s feelings on the matter. She read three newspapers every day and couldn’t figure, for the life of her, why men thought their minds superior to women’s. She didn’t truck with a lot of the sexist — and highly racist — screeds floating around her.

But Harry was torn. His mentor from the senate was a raging firebrand against the cause of suffrage, and gave a speech that raised Mrs. Burn’s ire, although she kept her anger to a minimum in her fateful letter. She wrote to her son that the speech had been “very bitter,” and then went on to discuss the people who had bought Charlie Waterburger’s house and farm. She didn’t know if the sale had been successful, just that “it was rainy that day,” which was also the day the young Waterburger boy broke his arm.

Harry had several vocal constituents wanting him to vote against women voting, along with a contentious re-election looming. His mother would not have been sad to see him lose; she would have been happier still if he wasn’t running at all: “I do hope you are not in the notion of making the race this fall. I hope you see enough of Politicians to know it is not one of the greatest things to be one.”

Oh Mrs. Burn, where are you now that we really need you?

She neared the end of her letter in typical mom fashion: “Write your mother every time you have a chance . . . Don’t forget to be a good boy.” And then, for good measure, she hoped he would help “Mrs. Thomas Catt” with her “rats” and put the “rat” in ratification.

Mrs. Thomas Catt, who did not generally get buried in her husband’s name, was Carrie Chapman Catt, president of the National American Woman Suffrage Association. Her name was invoked in Harry Burn’s mentor’s speech, who called her an “anarchist” who supported — horrors! — interracial marriage.

Mrs. Catt, who likely would have gone by Ms. if it had been an option, was perhaps not everything we would want in a hero (who is?): she fired back that interracial marriage was “an absolute crime against nature.” Many white suffragists, it should be noted, thought the right to vote should only be extended to them, and not to their sisters with darker skin tones.

So there was Harry Burn, a red rose for “no” and two votes to table the amendment on his record, but with his mother’s letter even closer to his heart. “Hurrah and vote for suffrage.”

This time around, when his name was called on the roll for the vote, he removed the red rose from his lapel and voted “aye.” Third time’s the charm; the ayes have it; the tie was broken. Tennessee became the 36th state (out of 48, remember) to provide the necessary three-fourths approval from the states to ratify the 19th Amendment, passed federally in June 1919.

A day after his fateful vote, Burn felt called upon to defend his actions, and in a statement read from the statehouse floor, he noted, “I know that a mother’s advice is always safest for her boy to follow.”

Later in life Harry Burn campaigned against the Equal Rights Amendment, ratified (maybe — it may have taken too long) earlier this year, finally, by the 39th state (Virginia), and Febb Burn’s grandson, who ran the family sock factory, did not think women had a place in business, although two of his daughters are now successfully running the company (where you can see Febb’s fainting couch, probably never used), so we can’t say Febb Burn’s legacy is without blemish. (Whose is?)

But when she was needed, Febb Burn and her pen turned the tide, and in October 1920 she became the first woman in McMinn County to register to vote. Because it was a fill-in card no one had bothered to change, it referred to “his” registration, but no matter: she was finally legally able to vote.

This story, of course, comes with a commercial. People like Febb Burn, and Carrie Chapman Catt, and Susan B. Anthony, and Harry Burn, fought for your right to vote, women of America: do not let them down. If you are not registered, do so today. If you are registered, request your ballot as early as possible. And then fill it out and get it back, preferably by some means other than the suspect U.S. Postal Service.

And here’s to 100 years (today!) of women’s right to vote in the United States.

One thought on “Motherly Advice”