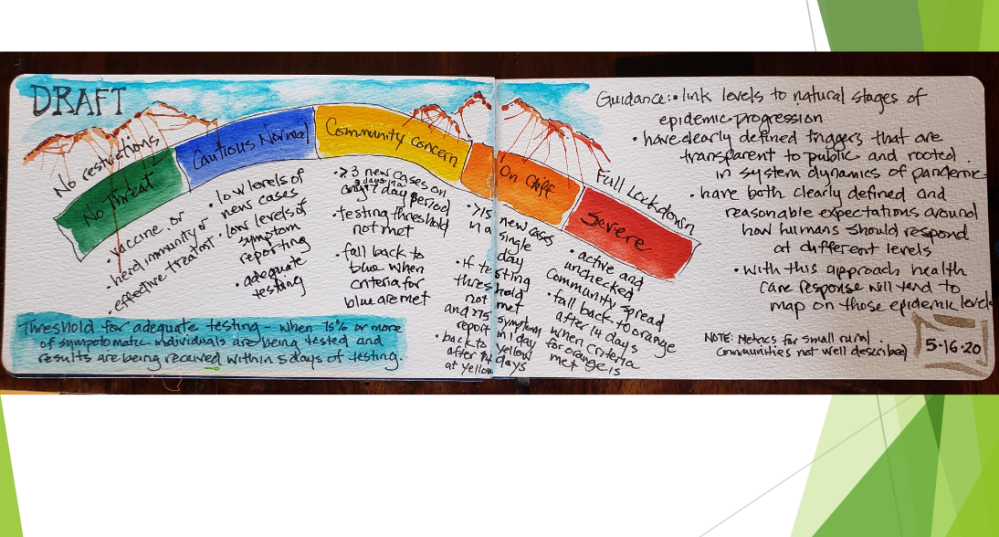 The news is not all bad today, for a change. Unemployment numbers were not nearly as bad as experts were expecting, assistance for small businesses is likely to be lengthened, and while it sounds depressing it’s not as Gunnison County is feeling blue.

Every Thursday, CBS breaks into its own morning newscast with a “special report” on the week’s unemployment filings, even though this same information gets discussed in a segment during the second hour. Yesterday still didn’t sound great: Analyst Jill Schlesinger reported that another 1.8 million Americans filed for unemployment, bringing the three-month total to over 40 million people out of work. But it was the ninth consecutive week the number had gone down from the previous week, she said.

Of course, then she added that an estimated third of the people who filed for unemployment have yet to receive any assistance. So we should not really be celebrating the part where “only” 2 million people lost jobs last week. Yesterday was also the day where columnist Robert Samuelson, who has reported on finances forever, estimated this recovery could take a decade or more.

Today, CBS unexpectedly broke into its own newscast to say that the unemployment rate for May, just released, is around 13 percent, which is much better than the 20 percent economists were braced for. Ms. Schlesinger, while happily surprised, still sounded a bit wary about this figure, and noted that white unemployment stands at about 10 percent to black unemployment up around 15. (She didn’t provide any figures for other ethnicities.)

[It just struck me that for the last two days, I failed to put black olives in my lunch salads. That seems newsworthy, doesn’t it?]

On Wednesday it seemed that the senate was destined to fail small business owners, but after lots of grousing and posturing, it came through with what was, I believe, unanimous approval of a house bill to extend the amount of time small businesses have to use Paycheck Protection Program funds.

While the big mostly boys got a pot of $500 billion to be handed out at the Treasury Department’s discretion, with oversight inspectors all fired (a tiny, probably momentary, shout-out to Sen. Grassley, who held up some nominations because he’s unhappy with these firings), the littlest of us were offered the PPP.

The intent of the PPP was to give money to businesses with fewer than 500 employees so that those employees would remain on the payroll rather than being laid off. But businesses with no business and no money laid employees off anyway. (We are very proud to say we are all still at work at Pat’s.)

Instead of just offering, Here’s some money, use it as necessary to keep your business viable, the government — it is the government, after all — said: here is a loan equivalent to 2.5 months of your payroll from last year (which does not account for states like Colorado where minimum wage increased almost $1/hour on Jan. 1). If you spend 75 percent on payroll, but not payroll taxes, and the rest on rent, utilities and mortgage interest, and do this in precisely eight weeks from the time the money arrives in your account, and you fill out an even-more convoluted 11-page form, your loan will be forgiven.

Imagine the government’s surprise when that wasn’t working out as planned. (Who made this “plan” in the first place, do you suppose?) The first of these PPP loans hit their eight-week mark last Friday so now, a week later than it should have, congress sent a bill to the White House that will extend the forgiveness period to 24 weeks and drop the payroll requirement to 60 percent of the loan.

I had decided against the PPP, opting for a different program, but after a consulting accountant advised me to sign up for the PPP I did so, which was good, because I’m still waiting for the promised assistance that was supposed to arrive within two weeks six weeks ago. (Should it ever arrive, I will return it, because I can’t do both programs.)

My PPP funds arrived at the end of May, but it turns out I outsmarted myself: because of the eight-week window, and the tax issue, I dialed back my request to what I thought I would manage to spend in eight weeks. Had I had any faith in politicians — har! — I should have asked for another $5,000. Hopefully we will manage without it — we’re going to have to, Outsmartypants.

At some point we are going to have to turn into positive numbers, which we haven’t since January, but that’s not really atypical. What is atypical is the June we are not having. In fact, I find myself making plans for summer, forgetting that we are already in summer. While traffic and temperatures have increased, we are nowhere near summer pitch at work, although we are taking a lot of orders for face coverings, which I had not anticipated in any of my projections.

It seems both economists and I can be off.

But our county may be about to change some of that. After sitting through an inordinate number of meetings, every last one of them projecting event sizes of no more than 50 outdoors, possibly through September, the county is coming out with a color-coded chart, effective next Monday, and it is prepared to peg us at “blue.”

The chart, which seems a very sensible way to make a long-range plan for county health, has five colors, from red for complete lockdown to green for go like there is no virus. Right next to green, as far away from red as you can otherwise get, is blue.

Allowable group size, which currently is 10 no matter where you are or what you’re doing, appears that it will zoom to 50 indoors and between 100 and 250 outdoors. Every kind of business is allowed to be open, it seems without restriction.

Social distancing, hand washing and face masks are all still part of the equation, and there’s the pesky part where “blue” is less restrictive than the governor’s health order, so some of this can’t be implemented without a variance from the state, but it makes it sound as though some of the events that have already been cancelled perhaps could have taken place.

If events can take place, and any organizers are still in a position to revive their event. that might keep us busier than anticipated at work. Which would not be something to complain about.

Maybe. Everything about this is a maybe, often in defiance of the predictions. Maybe unemployment isn’t as bad as we thought, or maybe the numbers just haven’t caught up. Maybe we’ll have a longer period of time to expend PPP funds; maybe we won’t need it. Maybe summer can happen in the Gunnison Valley, or maybe there will be big thunderstorms to rain out the chamber’s “Welcome Summer” promotion planned for tomorrow.

Rain or shine, we’ll be open at Pat’s for the first Saturday since early March. Perhaps it will begin to feel like summer after all.

How our county has fared, in color coding: 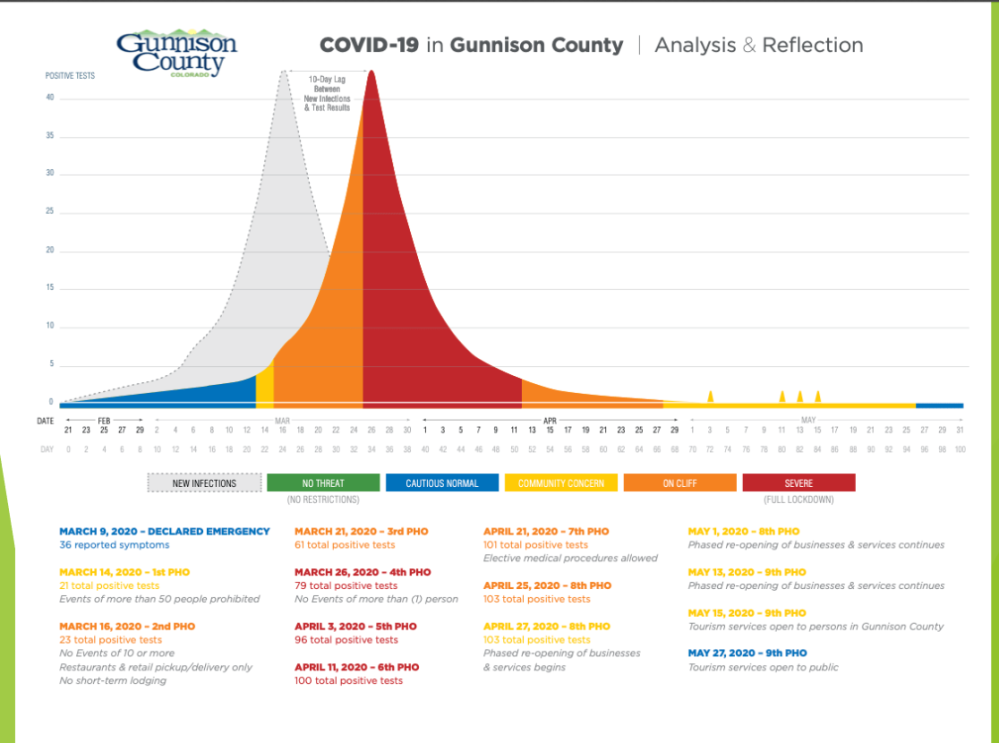