Here’s today’s report: It’s foggy, outside and in. Without confirming it for myself, I am taking the Denver weathercaster’s word for it that it’s -16 F in Gunnison, which appears to be the statewide low. Usually when it’s that cold it’s sunny and bright, but there’s no sign whatsoever of a sun anywhere.

Which is the same inside my head, filled with congestive fluids that have me feeling rather puny. Martin Luther King Jr. Day is one of many, many holidays that are not cause for closing at Pat’s Screen Printing, along with Valentine’s Day, Presidents’, St. Patrick’s — although one former employee seemed to think we should be fine with her taking it off — April Fool’s, May Day, Memorial Day, Flag Day, any days acknowledging family position (Mom, Dad, Kid), Labor, Columbus/Indigenous Peoples, Election (although we do close to go vote), Veteran’s . . . lots of holidays, so few of them taken off by the Pat’s crew.

But today I will take Martin Luther King Jr. Day off. I don’t think I’ll be honoring the day with any community service, other than the service of not spreading germs, although I can’t be virtuous in that, since I went everywhere I possibly could yesterday while starting to feel under the (foggy) weather.

[Here I pause for a Dave Day aside: Lynn and I went to the very nice memorial service for our former neighbor Dave, and learned that our new neighbor Dave, who recently left our new neighborhood, was a friend of Dave’s; and Bob’s good friend Dave had been friends with our neighbor Dave since the second grade in California. Bob’s Dave and I did decide that maybe we should try meeting someplace other than funerals.]

And I am having people, or person, brought to my germs, since I had already scheduled a piano tuning, the first in several years, for this afternoon. I’ve never met the piano tuner, but he got his music degree from Western Then State alongside our friend Carol’s son. Now I don’t have to worry about taking time off from work, since I’m on holiday. Whooo!

Okay, I don’t feel whooo at all. But I am putting housewarming gifts to use, despite shamefully not sending so much as a single thank-you note. I don’t know enough to tell you whether it’s crocheted or knitted, but I am comfortably tucked under a brightly colored afghan. Which Marrakesh is happily asleep on top of, so it’s making lots of us feel better.

And yesterday — did I mention the steam shower tripped the breaker again sometime last week? — I took our Ace gift card to the hardware store, where the clerk found just the right piece for me. Because when it tripped this time, in this new period of “self-reliance,” I knew what to look for, and one of the tubes that had been kinking, causing overheating that then tripped the breaker, was back to kinking. Electrical tape, it turns out, was not enough to support a surprisingly flexible tube that doesn’t function when flexed.

(I really need to send the Ariel Bath Company a piece of my mind. When this unit works, it’s great, but so far more has gone wrong than right.)

An Ace clerk whose name I ought to know, because he’s been there a long time, found me a piece of curved molded plastic that I was able to snap the tube — which I think is the tube that delivers steam to the shower — into, securing it with my new roll of electrical tape that I might never need again but was nonetheless well worth the purchase.

So I was able to steam my head, and the rest of my body, last night, learning along the way that I have yet to master the time button in the shower. (I thought it would count down, but every time I pushed it to see how long I’d been steaming, if not stewing, it started back up to give me more time that I really wasn’t looking for.)

We are not in need of housewarming gifts, but the ones we’ve received have all been extremely thoughtful and highly appropriate (if you come to our house you will be greeted by Gnome Spock), and even though we’re a couple of clods who don’t know how to say thank you appropriately, please know that we are using and delighting in all our gifts. Even in times of sickness.

I am now mustering the energy, if not enthusiasm, to make what I imagine to be my one foray outside today, for a littler walk than usual with Oz. And then, despite a number of things that could/need to be done around here, I foresee me, Marrakesh and the afghan all becoming better acquainted.

Let’s hear it for holidays!

A curved piece of plastic, some electrical tape and a dose of duct tape for good measure, and hopefully my shower won’t be the kinky place it has been. 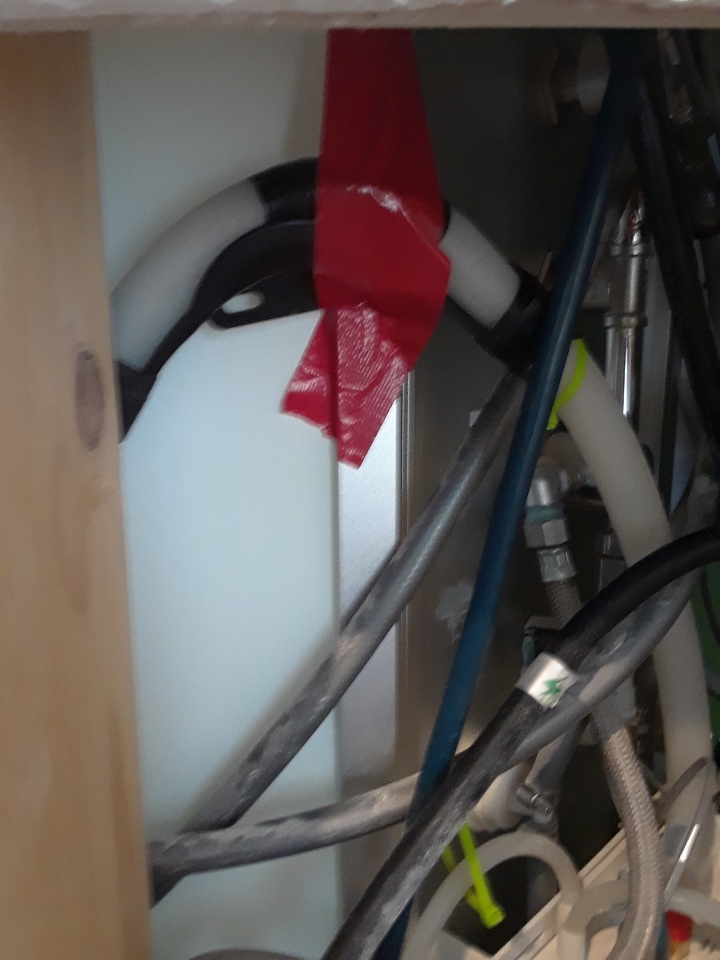