So I’m on electricity again. Still. It’s a constant. (And right as I type this, two men from GCEA have arrived to put a “quality monitor” on our line.) Today’s wonderment comes after all I wanted to do was see how much electricity my new Level 2 charger (really Electric Vehicle Service Equipment) was pulling.

Shawn the electrician came on Friday to install the charger (we’ll just call it that), which arrived Monday and got unpacked on Wednesday. It turned out to be much larger than I was expecting, although I don’t know why I thought it would be smaller than the city’s Level 2 charger that I’ve been using for free for the last two years. 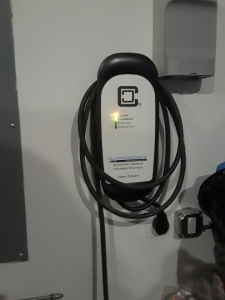 I plugged the car in at lunch on Friday and thought it got about 1 percent of battery charged for every minute it was plugged in, although it seemed like those miles got used up pretty quickly. So I was down to 14 available miles yesterday afternoon, and my car apparently has quit talking to me, because usually when I have about 18 miles left on my battery she tells me so. I plugged in after coming back from completing my vanity and bookcase bases, and then all I really wanted was to see how much electricity was being drawn.

It turns out this morning that it’s a lot, but what I mostly learned last night was that our energy-efficient, Earth-friendly house is using easily 10 more kilowatt hours of electricity per day than our 1960s tract house in town.

[I don’t think we have to worry about robots taking over the world yet, if Lynn’s dumb robot vacuum is any indication. The GCEA men turned power off to the house while they installed the meter, which inspired Lynn’s vacuum to go wandering without purpose or aim, getting stuck under everything it could. Although perhaps I should not be so smug: I figured out once how to send it to its base, but not a second time. Pushing the home button on the remote and the on-off button on the robot did nothing; I finally gave up and switched the machine off. It is, after all, just a machine. For the moment.]

I didn’t have solar panels on our old house, nor does the city offer a “Smart Hub” like GCEA does, both of which are allowing me to track electrical use by the hour at this new house. But the city’s bill did include a very convenient “usage history” at the bottom, giving residents a quick snapshot of 13 months of use. Our bill for last May, which was the first one I found, showed steady usage over the months, ranging from 829 to 966. (Not so steady for our water usage, which ran around 1,500 gallons monthly until Lynn’s lawn-watering season, where we went up to 17,500 gallons. In one month.)

Figure 900 kWh monthly, divide by 30, and we come up with 30 kWh per day to turn on lights, operate the kitchen and commercial appliances, power our electronics, provide the force in the forced air furnace, plug in cars for power or to keep them running in cold weather, run some space heaters in bathrooms and downstairs and just generally be contemporary Americans.

And then we moved. To a more modern house. With every light fixture in the place an LED. With brand-new Energy Star appliances, plus the same commercial ones. With a range now powered by gas. Warm floors for far less space heater requirements and no blower, although the gas fireplace does come with two small electric fans. The house is about the same size, although the garage is more than twice as big.

And suddenly this month we are using 45 kWh per day, except for when I plug my car in for three hours and we shoot to 58 kWh. Figure that on a monthly average, and we are using 33 percent more electricity in our energy-efficient home than we were in our traditional home.

That should make Earth happy, hm?

But it’s not making me happy. I just started this investigation last night, in between fits of trying to find books I know I have but can’t find on any shelf, along with lost DVDs, so I don’t have a lot of empirical data to regale you with, even if the raw data is extensive.

“Smart Hub” turns out to be one of those places for people smarter than me, because in all my looking this morning, I never did find my way back to the screen that popped up first thing last night. But a quick investigation doesn’t seem to show anything untoward, other than my 7 kwH demand for the first hour my car was plugged in last night.

We thought maybe the fireplace fan was drawing power, but we don’t draw any more in the evening than we do when we’re not even home. I don’t know why we’re using 2 to 2.4 kwH of power every hour whether we’re in the house or not.

While that doesn’t sound like an unreasonable amount, once you start doing math it becomes problematical. 2.4 x 24 hours = 57.6. In one day. Every day. Mitigated by some solar energy, even though one of my panels is so mired under snow and ice that it may not function until June.

There’s no point in asking Shawn about this. He will see it as yet another personal attack on his work, when all I want to do is understand why things worked so much more efficiently in a house as old as I am. I can tell you, I do not work nearly as efficiently as newer models of humans I encounter, and I was expecting some of that youthful vigor to manifest itself electrically when we switched houses.

There’s no point in asking Dusty. He would just refer it back to Shawn (see previous paragraph).

I don’t know if GCEA’s quality monitoring will turn anything up, or if we need to move to the suggestion made by Lena from the solar company, that we put meters on the circuits in the house to determine where the vampires are. (Wasn’t that some commercial once upon a time? With energy vampires?)

But something seems horribly awry. Or if you’re Sherlock Homes, which I never set out to be, there’s a mystery afoot. Either way, I’m going to keep at this — and you all get to hear about it — until I get some satisfactory answers.

One thought on “More Power”