So today it’s 2020, and I already heard one dad make his children groan as he was interviewed on the Sixteenth Street Mall in Denver, saying we will all see better in 2020. I also yesterday heard some man in Boulder, who works for a national institute of weights and measures or some such (Boulder has a lot of national institutions that surprise me), clarify that technically the new decade doesn’t begin for an entire year — something to do with the Romans’ lack of a zero in their counting system.

I probably missed my chance to look back, which can only happen in December, but I doubt my prognosticating abilities for looking forward, which is what you’re supposed to do on the first day of a new year. CBS actually did a bit of both this morning, helping us all out with resolutions of finance, technology and health, but then reviewing some of their favorite stories of last year, notably the grandmother who had never seen an ocean or a mountain before setting out on a four-year plan to tour all 61 of the country’s national parks with her grandson.

Her name is Joy, but as their journey spiraled more and more viral, internationally, that sometimes got translated to “Grandma Pleasure,” which she thought was funny but which mortified her traveling companion.

As for me, I am making no plans for resolutions. I feel this would work as well as it did in my favorite TV show you’ve never seen, Corner Gas, where the lead character resolves to go without chili dogs. As everyone counts down from 10 to welcome the New Year, he is munching on a chili dog. “Darn it!” he says. “Oh, well. Next year.”

My New Year’s Eve was really too wild to recount in a family blog. All I can recall is Lynn complaining about having to watch SpongeBob if I was going to be sleeping. I think this was around 8:30, but it’s such a blur now. I believe Oz climbed up beside me at some point after fireworks went off somewhere outside — no, I just shouldn’t tantalize you all with hints of my peccadilloes. It was huge and it was beyond wild, let’s just go with that.

Believe it or not, I did have big plans for this first day of the New Year: I wanted to be moving things from our current off-site storage shed to a different, smaller (and less costly) storage shed. But I haven’t made much effort to locate this smaller shed, so that will not be today’s project. I suppose the more prudent plan would be to find homes for all the items in the shed and just not need one at all. But January isn’t conducive to garage sales here in Gunnison. Our high — yes, high — temperature here at Riverwalk yesterday was 5 degrees. That’s Fahrenheit; 5 Celsius would be a tolerable number. Current temp: -3 F.

My second option would be to go to our new makers’ space — Lynn and I both joined and signed up for the woodworking class — but that’s out as well, since it is closed on holidays. I shouldn’t complain, because the young man who is running it has plans to be there every day of the week, 9 a.m.-6 p.m. I’m still not sure I see this being financially viable, particularly when it turns out he has five kids and a dad with dementia, but I’m going to hope for the best for him.

When we went to sign up, I took a board I had found on the day we moved out of our Irwin house. Up in the garage loft, placed there before I ever moved in, decades ago, were some shelves, possibly oak, covered in the most hideous shelf paper you could ever imagine. I brought them along with me, and they have recently resided in our on-site storage shed.

These boards are the same depth as the shelves of my library, with which I am still decidedly unhappy and which I have completely ignored since installation and the ensuing Great Disappointment.

So when we went to see the maker space, I took one of these oak boards, plus a shelf from the library, and used their chop saw — much more sophisticated than my chop saw here at the house — to make my first cut. I brought the oak board home and placed it as a new additional shelf in the library. Thanks to Brendan’s help, it got measured correctly and fit and everything.

Now, for the first time, I am looking at the library and seeing possibility. Interestingly, the oak is similar in color to the stained pine, so it doesn’t even look out of place. So I have denuded the other oak boards of their godawful shelf paper and am ready to go make more cuts to add more shelves to my library and possibly even start placing books in a semblance of order.

I still think the ultimate solution is to start completely over with my library to get to something that actually fits the space and looks like it belongs there, but for now I can add some shelves and do that much myself (with some supervision from Brendan at my new rent-a-woodshop). Lynn’s plans are perhaps even more ambitious, to perhaps combine wood and metal craft as she makes a sign for the mouth of our driveway.

But I can’t be cutting shelves to size today, since the space is closed, which leaves me looking for Option 3. There are several productive possibilities, but I’m guessing, in an action that could well set the tone for the remainder of the year, that — particularly since Oz and I have now been outside and can personally attest that despite the snow coming down, it is cold cold cold — instead of useful tasks getting done, books might get read and naps might be taken. It could happen.

Hope everyone’s New Year is as productive as mine. 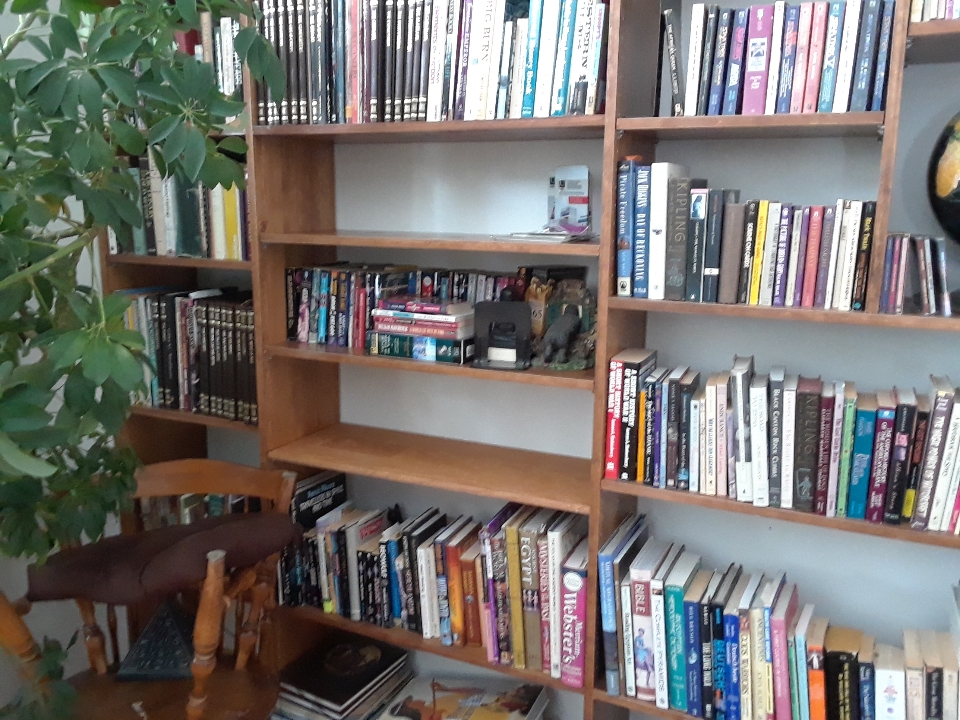