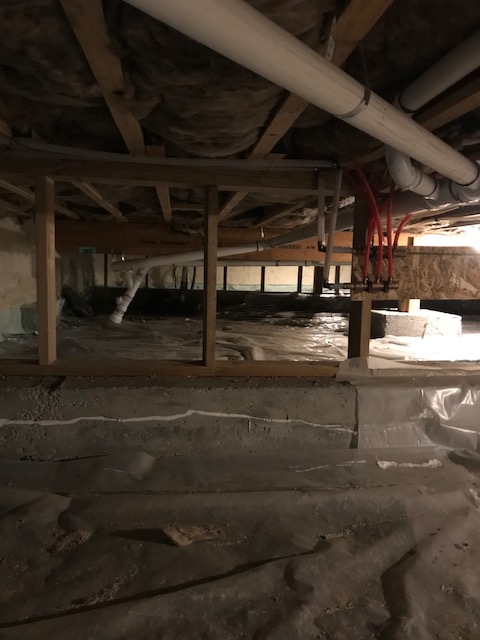 I’ve been putting this off, and I would have put it off again yesterday, after being the first to bring it up, if Lynn weren’t such a taskmaster. Okay, she isn’t, but she did say, “Let’s do this. Right now.” And she meant it. Which is how we found ourselves, for the first time ever, in our crawlspace.

This wasn’t as easy as it sounds, this adventure into the Great Unknown. The access to the crawl space is in the laundry room, which is really the Room of All Things to All People and Pets. Lynn was using it for laundry, as she does on Sundays, and while I just take a heap of clothes from my room directly into the washer, she appears to have endless heaps, all organized in some arcane fashion, so she has baskets and bundles, and in the manner of good salespeople, “everything must go” — at least out of the way.

I discovered long ago that the crawlspace —

[Great. Dictionary.com has it as one word; Merriam-Webster seems to prefer two. Maybe I’ll mix it up, just to be equitable.]

— covering is not what we would call “air tight,” and as it is in front of my folding counter, every time I shifted my foot, it caught on the lip of this opening. I re-purposed one of the anti-fatigue mats left over from Lynn’s bakery — okay, that’s not a re-purposing at all, when you use it for the intended purpose; I helped myself to a mat. This turns out to have a second (perhaps re-) purpose in the winter, because the floor is not heated where the crawlspace opening is, and that makes it cold right where I want to stand to fold clothes. Unless there’s a nice thick mat to provide insulation. (It does cover up a large amount of my Summer Pudding floor, sadly.)

So the mat had to be folded out of the way, which meant moving the hat rack that I brought out of storage because I thought it would fit in the house but it doesn’t, so we just dance with it on a daily basis, looking very much like Fred Astaire, as we move it out of one person’s way into someone else’s.

Finally we got everything cleared away and lifted the crawl space cover. Fortunately the stepstool reached to the floor, because the Little Giant Ladder did get pressed into service for our garage heating project. And then Lynn and I, and eventually Marrakesh, dropped into the depths.

Here’s the report: it smells like new wood. It’s much warmer than expected. It’s quite large horizontally. Not vertically. It’s called a “crawl” space for a reason. We are old people with creaky knees. 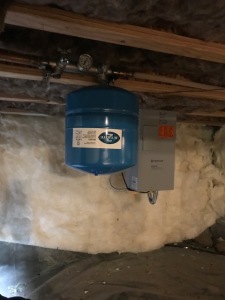 Thus, the only one to give it a full exploration was Marrakesh, and he was pretty circumspect about his findings. So we didn’t locate the sump pump or explore anywhere past the upside-down blue bottle very near the entrance.

We were down there because of Augmentation. This is a big word you might expect to see thrown around ostentatiously on a SpongeBob episode: Aug-men-ta-tion.

When we got our well permit from the Upper Gunnison River Water Conservancy District (and that is what they say when they answer the phone), we had to sign a contract to pay them, or somebody, to hold water for us in Blue Mesa Reservoir, downstream of us by about 10 miles. This is to ensure that in a lower-water year, of which we’ve had several (and I believe we are currently in a drought situation), if someone below Blue Mesa puts a “call” on water to get the amount they legally have a right to, “our” water will be released from storage in Blue Mesa rather than us having to stop using our well. That seems worth paying for, right?

But part of this contract, which was not mentioned by anyone that I’m aware of until the owner of the drilling company said something about it months after the fact, is that we’re supposed to have a flow meter to measure our water consumption. And then we’re supposed to record monthly readings from this meter.

In mid-October the UGRWCD (even that would be a mouthful on the phone) sent us a letter with a form so we could provide our numbers. Eventually, probably in November, I took it in to say, “I don’t know what this is for.”

I had actually called Ben, our plumber who is supposed to be leaving town, just before going in to the UGRWCD, and he seemed as stumped as I, although he told me there was a meter in the crawl space, near the opening, but that was just to measure velocity, or make sure we have constant pressure, since we paid more for a part that does this.

But when I told Beverly at the UGRWCD this and said our plumber was the guy who took over for Viehman Plumbing, she said, yes, they install these meters all the time. So I said I would go look, brought my letter back home, and periodically said to Lynn, “We need to check this out in the crawlspace.” And then we didn’t. Until yesterday.

I believe this augmentation report is due from the UGRWCD to the Colorado Division of Water Resources by Dec. 31, so we’re not helping the cause. Beverly did make the mistake of telling me that not everyone returns their reports, and it sounded like life goes on. It’s going to have to, in this case, because I’m pretty sure we don’t have a flow meter.

We will need to get one installed, of course, but that means finding a plumber with free time and the inclination to do a very small job. Maybe our neighbors could fit us in during a free moment, like they did for a repair down at work a week or two ago. And I’ll have to go back to Beverly, head hung low, and tell her Lynn and I are abject failures at country living.

In the meantime, we have traveled to the greatest depths of our house and lived to tell the tale, or in Marrakesh’s case, the tail, and other than moving everything that rests above this space, it really wasn’t difficult at all. And so far not cobwebby or dirty or any of the other things one associates with a crawlspace. I have no idea what took us so long.