If ever there was a day to tuck in with a good book, particularly the book I’m supposed to be reading for history group, pausing occasionally to stare at the snowflakes drifting outside, it was yesterday. Did I do that? No. Did I take it several steps further? Yes. After an initial foray out in the morning, I spent the rest of the day asleep on the couch.

I thought I was getting sick, but I think I was just worn out. Holidaze and all that, all that probably being moving, unpacking, HOA exasperation (how difficult should a shed really be?), just a life in general that seems to have roared along full throttle this entire year.

If I was going to take a time-out, it might as well have been the first real snow day of the season. The snow started in the wee hours and continued all morning, until it got so warm everything started melting. Then it snowed again, this time with some wind, then warmed up, then got dark and snowed again.

Our roads here at Riverwalk got plowed for the first time, as did our driveway. The only shoveling we have to do is our covered sidewalk (so far fairly snow-free), right in front of the garage, and the deck, which doesn’t seem huge to Lynn until she’s on it with a shovel.

Downtown, before my day of utter slothitude, I came across Bubs Dorzweiler, shoveling sidewalks for the city. “I heard you were mowing your lawn yesterday,” I said to him, and this turned out to be true: one day before enough snow to warrant plowing, Bubs was out in his yard mowing.

What he was really doing, he said, was getting leaves up, since the grass hasn’t grown in months (except here where we Some Day hope to have vegetation instead of mud, and started toward that hope in September).

Apparently this is a “thing” for Bubs, to see how far into the year he can push his lawn mowing. A couple of years ago, he said, he was out there on Dec. 20. But he was thinking Dec. 7 this year is pretty good, too, and since we’ve had little dribs and drabs of snow since October, he’s probably right. If you really want to be out mowing your lawn months after nature and society require it.

It turns out I’m still feeling rather washed out this morning. I’ve already accomplished more inside the house than I did all day yesterday, but I still have to go clear off the deck so that Marrakesh, who really wants to be outside but doesn’t want to be in snow, can have his life’s objectives met.

Since I have nothing witty, nor pithy (not that people accuse me of either), to offer you all today, I think we will all have to wait for a day where energy levels meet or exceed federal standards.

I shall exercise my brevity (which always needs boosting around here), and call this good for two days of production, and leave you with evidence of just how popular the couch is in this house. 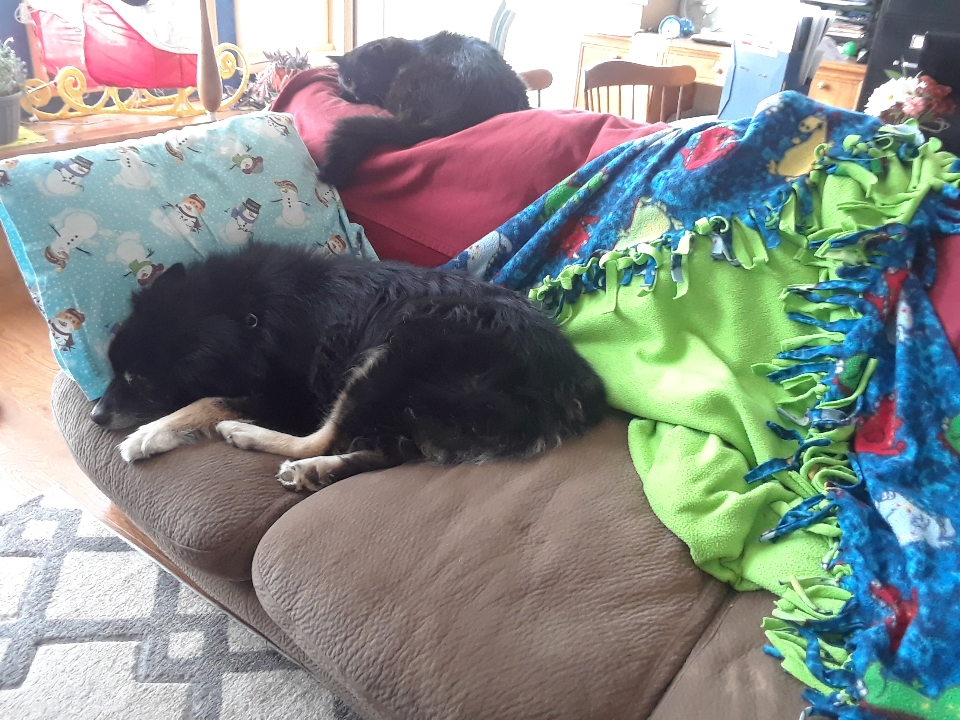 One thought on “Snow Day”