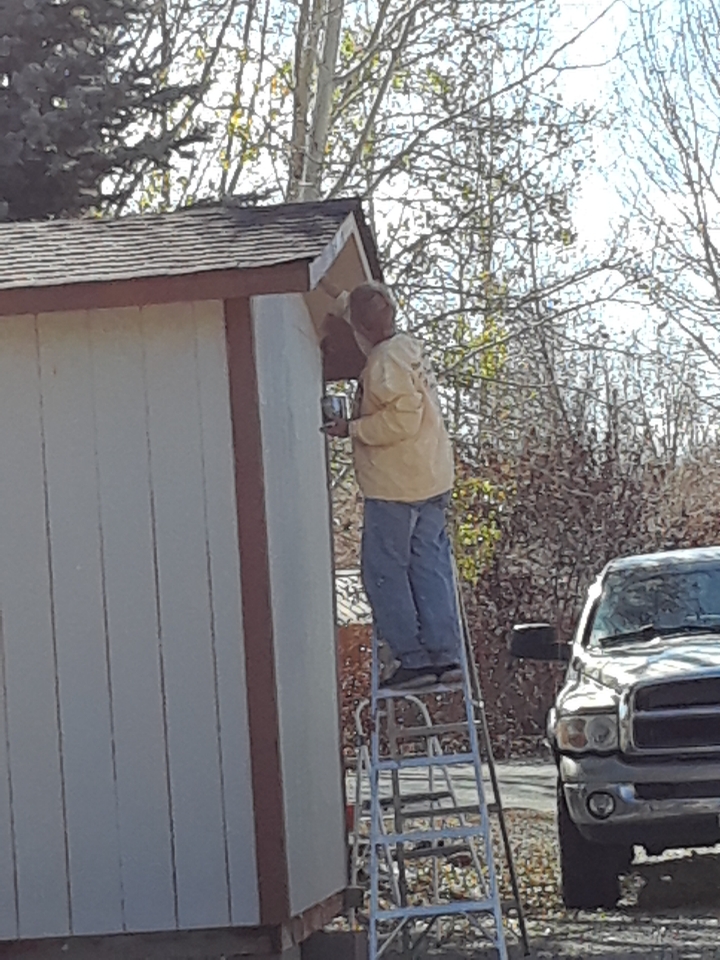 It was an absolutely beautiful fall weekend on Saturday and Sunday, skies blue, temperatures pleasant in the high 50s — and I was irritable all weekend.

Like a lazy woodland creature, I did not have all my nuts squirreled away in the tree, and time was a-wasting. Snow was in the forecast, so this was the last gasp. Everything needed doing at once.

The guys at the paint counter at Ace were skeptical when we showed up at 3 p.m Saturday. Bryson started in the same place Diana had with me: “Clark + Kensington is rated to 35 degrees,” he said, which is what she told me the other day. “But it’s going to get to 21 tonight.”

I asked Bryson about the stain Diana had mentioned, which in the interim my friend Jim Barry had clarified for me is called “solid stain” and functions much like paint, except that it fades instead of peeling. Bryson apparently did not share Diana’s enthusiasm for this product and said it wasn’t going to work any better than paint. The difference, he said, is in the lower amount of acrylics the stain contains.

Lynn opted for paint. Bryson mixed up a gallon — in the wrong color. Fortunately, Lynn noticed before I grabbed it and jetted to the check-out line or our shed, which the HOA has mandated will be painted “as it is set” (although the man who delivered this mandate then noted that it was going to be hard to paint in the cold and offered to see if the board would be okay waiting until spring, which is what Lynn and I requested in the first place).

And then this man got hung up on stain versus paint. Like me, it seems as though he’s never heard of solid stain. I have no idea why it matters so much to him, but at 4:30 Friday it became apparent that he had forwarded nothing about our request to the board, because he didn’t know if he should ask about stain or paint or both. Who cares? If the goal is to turn the shed gray so that it “substantially” matches the house, why would you care what we put on the walls?

Had I answered him at 4:30 and had he then forwarded information to the board, I would be looking out at snow this morning, still waiting on an okay.

So Lynn and I painted. Without HOA approval of our color. We added a brown for the trim, just like our house. Not really: our house trim is a variable stain called Lifetime that will change in color; this was “Morning Coffee” brown paint to go with our “After the Rain” gray. Paint, not stain, if you care.

So this morning I will re-submit an application, this time for a gray shed with brown trim. There. I’m sure they will find something else to object to — probably the shade of gray, since there are at least 49 others, at least in “literature.”

But it wasn’t enough to do the world’s worst paint job (no prep, no prime, no cobweb clearing, no taping — just slap and go) in what could have been the last nice weekend of the year. No, at work I have not laid in my winter’s supply of clean screens.

We use our screens over and over, putting emulsion on them and then stripping it off (with soy-based chemicals). We do this stripping at Brad Coffey’s car wash, same as Pat did for the first 20 years of her business’s existence. He has high pressure, good filtration, and lots of room in which to work — none of which is an option within the confines of Pat’s Screen Printing. But the car wash is outdoors.

Last year, when we did a massive reclaim in mid-November (so, a pattern emerges), he dropped one of the bay doors down for us, although he said he never pulls them down anymore and it would shriek like a banshee when we raised it.

This year, still in October, Kara and I set out with a regular load. But we left behind enough screens to make a complete other regular load, so mid-November could be a thing again this year.

The last three times we’ve gone to the car wash, we’ve had to wait in line, including yesterday. And the the line never ended, although we held it up considerably. It seems we were not the only squirrels in action yesterday.

I don’t really like reclaiming screens when there’s a line at the car wash, which usually only happens if we time it during Car Show prep. People don’t realize we’re going to be there for two hours, so they hover behind us, waiting hopefully. And yesterday one of Brad’s other four bays was closed, funneling this never-ending line of cars and trailers into two bays.

I always wait for someone to yell at us that we’re taking too long or hogging the bay. I like to think I’m prepared to suggest they call Brad, whose number is on the side of the building, and complain about TL taking too long. Since I never wash my car at the car wash, I don’t know how much money the average customer spends, but I give him $50-60 each trip. Multiple times each spring and summer (and fall, and early winter). For 20 years. I figure Brad will tell them they can wait.

But no one yelled at us yesterday, or even moved their car impatiently close. Even as we were loading our screens in the truck and I waved the next car in, the driver hesitated until we got in the truck and left the bay. It was almost 4 o’clock, and there were still lines at the car wash, including Brad himself, who was driving his truck with something that looked like a giant car-wash-drain vacuum towed behind.

Lynn finished painting the shed by herself while Kara and I reclaimed, which was worrying because the shed is parked right along an irrigation ditch that made footing uncertain for the ladder. But she got it done an hour ahead of those of us still at the car wash, and then she came home and weed-whacked the area we hope to someday be allowed to place a shed by all the grace that is holy of the HOA board.

[Have I mentioned I’m not a fan of HOAs?]

I grabbed the wheelbarrow and carted faux rocks, which form the skirting of our house, from the leftover pile and put them along the drip line at the front of the house where water runoff is starting to dig multiple channels to China in what will be Lynn’s flower bed. In a moment of cuteness, the first thing that happened once they were laid down was Marrakesh hopped onto them and walked along their length. He would like it if we spent more time outside with him.

We thought we were at least ready for this first significant snowfall of the season, but right as it started snowing in the middle of the night, I looked out at the carpet sitting on the deck and thought, yeah, we should have brought that in.

So I believe I will do that now, then send our shed supplication on high, and hope that we get the go-ahead to put the new gray-and-brown shed in place in time to fill it before we really hit winter. There is no rest for us squirrels.