Oz and I seem hellbent on destroying our new house as quickly as we can, and I for one am certainly not impressed with us.

If you will recall, one week ago today he went tearing off after a skunk and shared that experience with nearly every corner of our house. (At least he learned his lesson: since then he has gone after a squirrel and ripped across an empty lot to tangle with what Lynn thinks was a racoon — although she worried it was another skunk. Now he does most of his walks on a leash.)

My room seems to have taken the brunt of Oz’s sharing, and although I put deodorizer on the carpet, about a gallon of Febreze on the carpet, clothing and bedding, and opened windows to the point where my aloe has about given up the ghost (who can kill aloe besides me?), it still smells strongly of skunk.

Yesterday Lynn and our friend Sue went to the Downton Abbey movie in Crested Butte (Lynn hasn’t seen so much as an episode of the TV show, but Sue’s a big fan), and instead of squandering the day blogging and napping, I finally turned attention to my room.

I stripped the bed clear down to the plastic “box springs” and even took a peroxide-baking soda solution to the plastic. I set blankets out on my de facto clothesline (the deck railing); washed sheets and pillowcases with some baking soda; sprayed pillows with Febreze and set them in the chairs on the deck or in front of our south windows. And I refilled the bowl of vinegar that in theory is helping reduce the skunk smell.

While I was at this, I also moved in a bookcase and settled on a place for the bed, which has been sitting more in the middle of the room than it should have been.  I unpacked yet another box of books and organized the young adult books from my childhood that I want in that case. I set a handful of children’s books in the bookcase that I already had in the room.

Other than the wool blanket that fell off the deck railing and will never be straw-free again, it was feeling like a successful project. Even though the room still smelled strongly of skunk.

I can’t figure out where this is coming from. It must be the carpet, I guess, because I think Oz came in and lay down. It feels a bit unfair: I was sound asleep with no knowledge of the incident, and I’m the one paying the price.

Around 1 this morning (which I like to think of as “last night”), I was in the throes of some very complex dream about which I remember nothing except that it was quite involved. Then I thought I heard our doorbell. With hindsight, I have to assume I either dreamed it or heard some other noise, but at 1 a.m. I thought it was our doorbell, so I got up out of my sleep, reached out my hand to steady myself — and put it right on the rim of a bowl full of vinegar, sitting on the bookcase above the stack of children’s books.

In soup terms, this bowl holds half a can of Campbell’s when full. In vinegar terms, it holds about five gallons, and even with a quarter of the vinegar still left in the bowl, it drenched my bookcase.

The vinegar spread all over the top. It went down the backside to pool on the wall molding. It went down the front to gather on the carpet. It got, in wet quantities, on the underside of the top of the bookcase. And it spilled all over my stack of children’s books.

In retrospect, I set those books in the worst possible position I could have: at random on their sides. Had I set them upright, I think one or two might have taken the brunt and left the others alone. And since they are all of varying sizes, each book seemed to catch the liquid and pull it clear across the surface.

So at 1 a.m., lights blazing away, I went through half a roll of paper towels, sopping up vinegar and setting books face down all over the carpet. A carpet I had recently looked at and thought, with great satisfaction, “I’m really glad I opted for this color.” So far, it doesn’t seem like vinegar is going to change the color, but at 1 a.m. I was conflating it with peroxide and wondering why I was saving $10 books at the expense of a several-hundred-dollar carpet. I can’t help it: I have it on reliable authority that I was named after the character in a book, and that even as a very young child I carefully turned my book pages one by one. It’s ingrained. Possibly even imprinted.

So I was wiping off book fronts and backs when I realized my six-book Clifford the Big Red Dog compendium was soaked throughout the last third of the pages. So I set the books upright with their pages fanned as best I could manage — I was very tired. It finally occurred to me that leaving them spread around my bedroom floor was not an effective strategy — Oz and lying on the floor, remember. He doesn’t care as much about books as I do.

Then I moved them, two at a time, to the dining table, covered by a tablecloth that Lynn might be sad if it got vinegar-book fallout but which I was willing, at 2 a.m., to sacrifice. That’s where everything remains, and I have yet to assess the damage. I think my mom’s childhood Little Golden Book of Flowers may have taken a hit on the cover, but I think it may have completely protected the Tangletown Tales, of equal vintage.

I would like to announce, that even in the throes of anger and dismay, as I was picking books up one by one, I was looking at titles and thinking, “Oh, this is a fun book” and “I ought to re-read that one.” I appear to be incorrigible.

And, perhaps, skunk-scent free. I haven’t really investigated that this morning either, but as I was throwing vinegar-soaked paper towels into the trash and setting vinegar-infused books on a carpet already laced with vinegar, I did wonder if this might not replace some of the skunk scent.

I am going to hope, at least, that something good comes out of this house-destructive tendency exercised by both the dog and me.

These two books, one belonging to my mom and one to my dad when they were kids, have survived all this time, but may not make it past the one-two combination of Oz and TL. 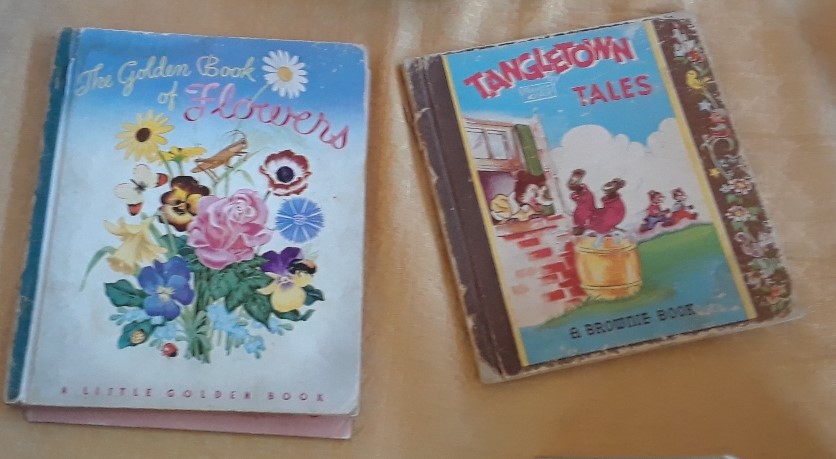