Maybe you noticed: no Beans yesterday. I was trying very hard — and still failing — to get to work on time, only to turn around and come home for a large chunk of the day (house stuff and Skype lunch), followed by 45 minutes at work, followed by football. There definitely won’t be Beans tomorrow morning due to volleyball; who knows what the afternoon will bring. 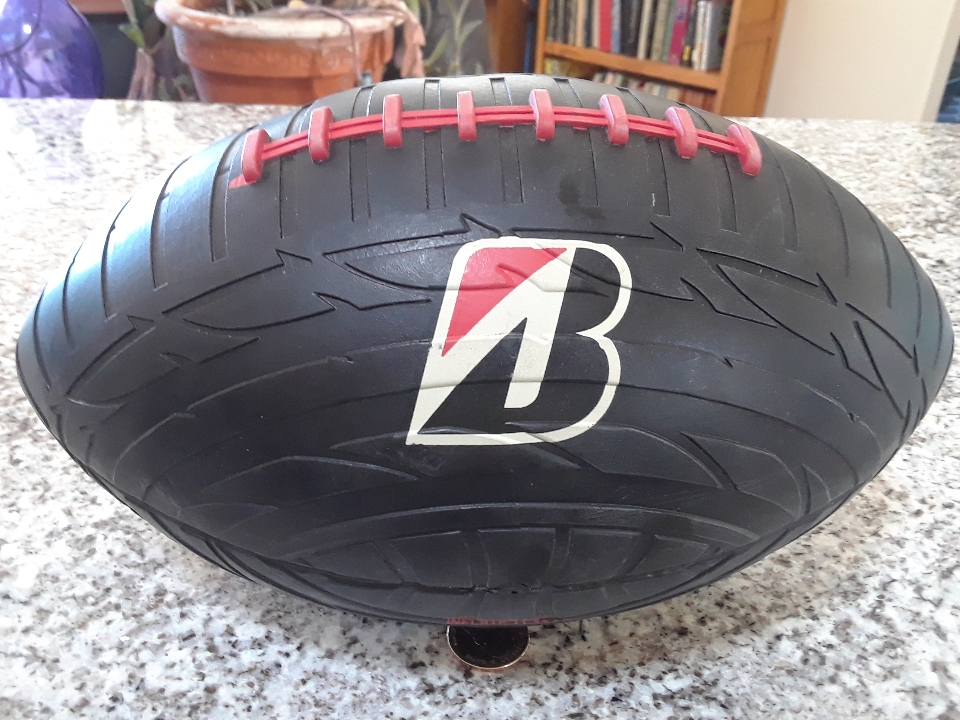 When I was at the newspaper and a place called Ruland Junior High then Middle School still existed, a girl named Tricia Hartley wanted to play football. This may not be the most common request, but I don’t think it’s as unusual as it was made to seem. Some girls are interested in football, even in playing it. My sister Terri played volleyball, but in a different era, she might have wanted to try football. I kind of think the high school football coach, who was also her PE teacher where they played football, wished he could have made her his quarterback.

But when Tricia wanted to play football, the Colorado High School Activities Association rule book was clear: it explicitly said girls could not play. There was a reason to back up the rule, too: Because they might get hurt.

Do you see the flaw in this reason? The courts, where Tricia’s parents took their daughter’s request, did, and while it took a year, Tricia was able to suit up for her eighth-grade season, in front of more statewide media than ever covered a Ruland football game before or since.

And for the record, the world did not come to an end; there was no fissure in the middle of the field as higher beings objected to this re-ordering of the world order; Tricia had, as most kids do, a perfectly ordinary season and then hung up her jersey. Her legacy lives quietly on, as girls today can — and occasionally do — play football in Colorado middle and high schools.

I did not see any girls on the field at Gunnison Middle School yesterday afternoon, although under helmets and padding it’s often hard to tell, but I did see plenty of examples of why the courts found in Tricia’s favor.

On the third play from scrimmage, one of the Montrose players snapped his arm and left the field in an ambulance. Late in the seventh-grade game (which went on forever), a Gunnison player went down at midfield. His coaches bent over him and asked what hurt, and he couldn’t tell them. Maybe up here, he finally said, pointing to his head.

They carefully removed his helmet and asked him where he was. He knew that, but he couldn’t tell them the name of the other team nor where it was from. But that could be any inattentive middle school kid, so they continued to question him as I picked up his helmet and took it to the sideline. He spent the rest of the game sitting next to school personnel on a bench.

Just before the final snap of the game, Gunnison’s center was missing because his knee went out.

So I’m not sure it’s just girls who can get hurt playing football.

I never did official counts — I have far more trouble than game officials counting how many players on are on the field (Montrose really struggled with this, and twice in succession got called for illegal formation because they only had 10 players on the field and not enough on the line) — but it looks like Gunnison had about 15-17 players per team. That’s not unusual for recent years, but substantially lower than previous generations. Tricia Hartley, for instance, was one of 30-40 eighth-grade players.

Gunnison High School, which at one point could field varsity, junior varsity and freshmen teams, only played a junior varsity schedule last season. The coach told me earlier this season that they would still be JV this year (although it appears the seniors are being allowed to play, which wasn’t the case last year), but he had nearly double the number of players, somewhere in the 30s. Thirty boys out of a male school population of around 200.

I recognized an inordinate number of spectators at yesterday’s games, which I suppose is why football continues. These parents, grandparents and other relatives are just celebrating the newest generation of their family to take up the sport.

In my recently former neighborhood are two families with six kids each. The family around the corner, with five sons, had yet another boy playing on the seventh-grade team (I think this is Boy #4, but I’ve lost count). And my former next-door neighbors (two daughters, four sons) were there to watch Boy #3 be quite the superstar for the eighth-grade team (quarterback-running back, scored one of Gunnison’s three touchdowns and a two-point conversion),

Lynn’s hairdresser was there to watch her grandson, as was the vice president of my bank. The college (university) groundskeeper and his older son were on hand to watch his younger son anchor the eighth-grade line. The high school athletic director’s son was on the same team, and Dave further noted he had coached one of the Montrose coaches.

It’s a rite of passage, and a rite of fall. Dan, the head official whom I am in closest proximity to as we both hover in the backfield (I keep the clock, and do so from the field because I also switch the balls out on changes of possession), at one point asked if I liked officiating volleyball better, but it’s really hard to beat being outside on a perfect September afternoon, watching coaches who used to be players I covered when I was at the newspaper and staring into the only visible part of each boy, his eyes, trying to figure out which kid belongs to whom.

Yesterday we could also all take heart in not one but two Gunnison victories, which has not been the case for several years now. Except that I can never remember the scores from either game the second I clear them from the scoreboard.

It’s not nearly as noticeable with middle school girls, but it also astonishes me every year the size difference between seventh- and eighth-grade boys. And every year there’s always an eighth grader impressed with his newly-lowered voice who loves to shout “huddle!” after every single play.

So I don’t know what to tell you. I’m mostly glad I don’t have any sons (or daughters) or grandchildren to agonize over whether it would be okay to let them play what we now know (damn scientists) to be a lethal sport. Several of these kids aren’t going to play the game much longer anyway. Like Tricia, they may call it quits after this year.

But then I wonder about the boy who struggled to figure out where the opposing team was from. Maybe he will need to call it quits right now and save his brain for math or science or English. Maybe they all should.

But my ex-next-door neighbor had a great game, one that I’m sure was hashed and rehashed over dinner with his family, all of whom were present. His little brother (Boy #4) was helping their dad on the chain crew, dressed in his rec league soccer uniform. But I’m quite sure that next year he will be buried under pads for the GMS seventh-grade football team, like all of his brothers and his dad and probably granddads before him.

And maybe his twin sister, the toughest one of the bunch, might want to play too. At least now the rule book will let her, even if common sense suggests no one should play the game.

One thought on “Footing the Bill”