I have had non-stop trouble with WordPress on two computers in two locations today. And my bicycle race. God bless the internet, hm? 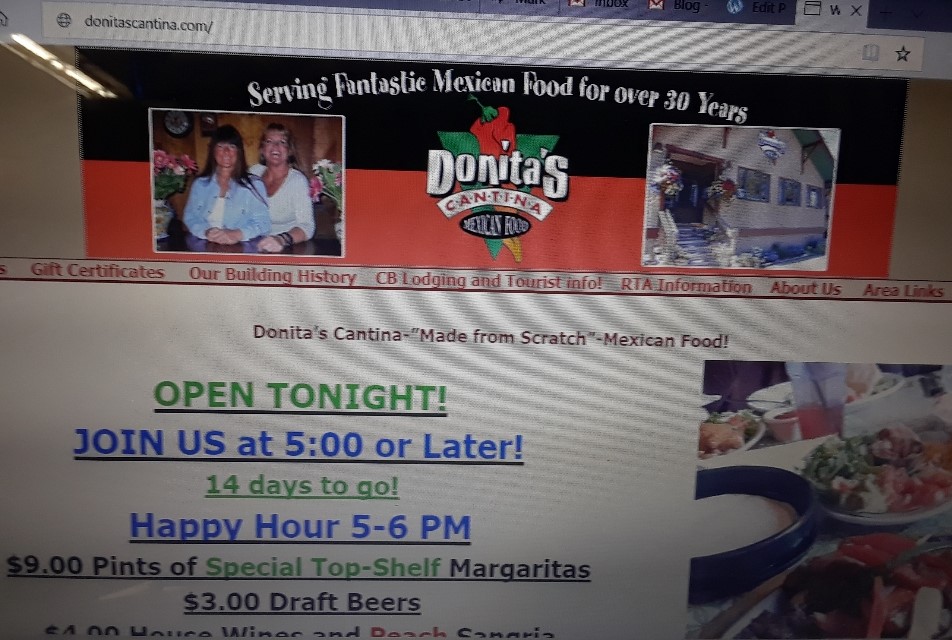 I expect, when I read the national news, that it’s going to depress me, but yesterday it was the local paper with the news that just makes me feel powerless in the face of money.

It wasn’t new news that Donita’s Cantina, a fixture for decades (a 20-year lease expired, if that tells you anything) on Elk Avenue in Crested Butte, is closing at the end of the month. It’s been out for awhile that the long-time Mexican eatery is calling it quits rather than give into the substantial rent extortion demanded by landlord Bill Lacy. But the story makes it clear this appears to be the start of a trend, perhaps because the ski area is now owned by Vail. Park City, Utah, warned us this would happen.

A bead and crystal store also on Elk is also closing because rent is going up so high the business is being priced out. I didn’t quite get the news story’s reference to Niki’s Mini Donuts. It didn’t say anything about Niki’s rent or business costs, just that the business is for sale for $2.8 million. (For the record, Pat’s Screen Printing is also available for purchase if the price is $2.8 million. Possibly even a little less.)

But none of this is boding well for long-time locals in business in Crested Butte. Donita’s has been there forever, an iconic institution, and while the two women who own it are more than entitled to retirement, this feels forced.

I know that there is a persistent notion valleywide, perhaps everywhere, that owning a business is a fast track to riches. Perhaps especially in this valley, where so many people are employed by government entities (my contention: we are not a tourist town, we are a government town) and feel so grossly underpaid and underappreciated, they look at those of us on Main Street (and Elk Avenue in CB) and somehow assume that we are doing much better than they are, when the reverse is far more likely.

I believe I read the standard profit margin on restaurants is 3-5 percent. That means the profit on a business that grosses half a million dollars could be $20,000. And chances are good some portion of that has to get plowed back into the business for improvements and/or cash flow.

In Crested Butte in particular, but also Gunnison, housing prices have really made it difficult for many people to find the help they need at a wage they can afford to pay, and you hear endless stories about people working double or triple shifts in the summer. When we were buying appliances the hardware store couldn’t find help, and at one point I saw Kim Eastman, jill of all trades, behind the cash register. She said she still had her other jobs, so I’m guessing she was just lending a hand.

And the Gunnisack  (a “cowboy bistro” for whatever that’s worth) started closing for dinner a month or so ago due to a lack of qualified help. I understand they’re now trying a modified schedule, closed some evenings, open others.

So you’re in Crested Butte, working your butt off because you can’t find help, and now your landlord wants to increase rent by 50 percent. That would be too much for me, as it was, once. Or more technically, for Lynn.

Lynn had her own bakery, and couldn’t afford help (despite being one of those wealthy Gunnison business owners) — and then the owner of the building she was renting switched property managers to the one universally disliked in town, and suddenly Lynn’s rent shot up in that 50 percent range. We attempted to negotiate the increase with no success, so she closed her bakery. (And went back to a large multinational business with a local government contract.)

A few years later I heard the property manager’s minion wonder what had ever become of the lady who owned the bakery. “We would have given anything to keep her,” he said. Ha!

Lynn’s vacated bakery space did sit empty for a long time, which is precisely what I think should happen to Bill Lacy when Donita’s leaves. Of course, there will always be the Niki’s Donuts of this world: when this couple arrived from Houston, they just knew mini-doughnuts would be the ticket because — I kid you not — his market research consisted of seeing the long line out the door of an establishment in San Francisco. I’m frankly surprised they’ve lasted this long.

So perhaps some optimist will try a new restaurant, marking the prices up and the portions down, and maybe new clientele, drawn by the Vail name, will arrive and think they are cool for paying twice as much for half the portion. But I think greed is going to make it that much harder for any business to announce they are coming to the end of a 20-year lease.

I have much more to say about landlords, triple-net leases, wages and all the extras businesses get to pay for the privilege of being in business, but I am still having WordPress issues. And time issues. I’m sure you haven’t heard the last from me, but maybe for today you have.