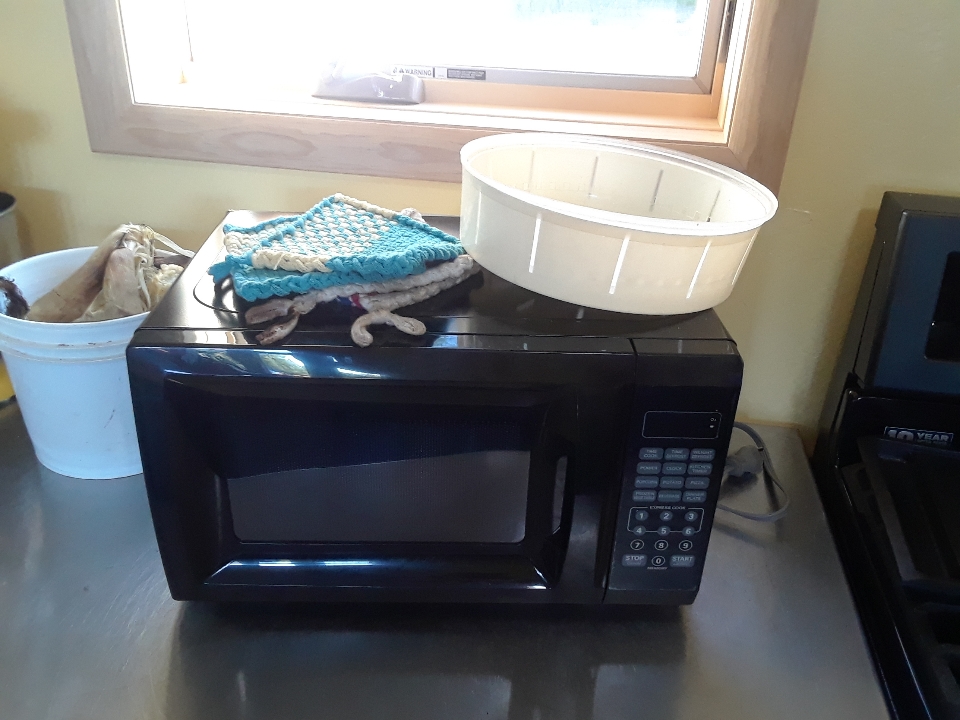 Our $50 microwave failed us last night, and I’m beginning to wonder if there’s a message in all this.

Isn’t there some church — Church of the Flying Spaghetti Monster, I think — that espouses wearing tinfoil beanies? It may be time to investigate their orthodoxy more thoroughly.

Let’s review: Lynn and I left a perfectly respectable $100 Black & Decker (yes, the tool people) microwave behind on the counter at 15 Irwin with a plan to upgrade to an over-the-stove model here at 60 Riverwalk. The over-the-stove model, with the exact same wattage as the Black & Decker, is about twice the size, something like close to three feet across. Without it ever going on the wall, it seemed big and hulking, and like it’s going to hover directly above the stove, blocking the view of the back burners.

But we don’t know if this is what’s going to happen because, as mentioned, it’s never gone on the wall. And why not? Because some dumbass (human or robot, I know not) on an assembly line somewhere allowed a badly dented unit to get packaged up. Not just once, but twice.

And wherever this distribution point is, it’s never efficient: True Value gets appliance deliveries every Wednesday, and our microwave(s) never arrive on the scheduled Wednesday. The first time, not that it mattered, because installation was a long way away, it was something like three weeks late in arriving. The first replacement was a week overdue.

It was hand-delivered by a True Value employee, but then sat, in its intact box, for almost a week before Sam arrived to unbox and install it. Except that when he unboxed it, it was dented in not one but two places.

So for two weeks we’ve been relying on a little 700-watt microwave from Walmart, since clearly we are never going to get something over the stove. Last night, as Kristi Baril was joining us for a dinner that was supposed to start at 6:30 but didn’t really happen until after 8, everything that could go wrong did. And the little microwave that could suddenly couldn’t.

Now, I think there are Other Forces in play here, namely Electricity. I don’t know why, and Lynn was vague, but our electrician and the inspector returned yesterday afternoon. Prior to their return, I gather, Lynn was vacuuming in preparation for our guest and the vacuum tripped a breaker.

Vacuuming one’s house doesn’t seem like an unusual demand for electrical load, but Shawn, after the inspector had gone, told Lynn that sometimes that can happen, and he would replace the breaker when he comes next week to install the floor outlets she wants in her Good Room.

So fine. But then when the grill wasn’t heating ears of Olathe sweet corn fast enough for Lynn’s liking prior to dinner last night, she put them in the microwave — and promptly tripped another breaker.

Doesn’t that seem awfully coincidental to you?

The corn went back on the grill; the rice was more problematic. Lynn just this week sent me to work with every grain of real rice in the house, to give to my co-workers because we have found these 90-second pouches at the health food store (owned by our electrician’s mother-in-law) that suit our rice needs. (I am sure I am horrifying rice purists like my mother, but it tastes pretty much the same to me and did we hear the 90-second part?)

It turns out you can boil the rice in its package, which feels sort of paperish rather than plasticish, although that’s five minutes rather than 90 seconds, so dinner was salvaged, but Kristi will either never come back or perhaps just eat a meal before she comes so she won’t starve while waiting for us to get our act together.

In the meantime, I want to know what’s going on with the electricity in our house. I went through our first power outage one morning while Lynn was at work, a blip long enough to interrupt about half the digital clocks in the house, but blowing breakers while doing basic household tasks like vacuuming and microwaving? That seems like a bad bargain to me.

[And now I am irritated with technology in general. I am trying to watch the bicycle race in Spain while doing this, but the “sign in” button on the ruinously expensive feed Lynn buys for me won’t do anything on Firefox, and over at Microsoft it keeps allowing me to sign in but then tells me I don’t have access to the same cycling event I’ve been watching on their feed for a week. This will mean getting hold of NBC’s semi-helpful “help” people or skipping today’s stage and hoping the problem resolves itself by tomorrow.]

I’m sure this was much easier when humankind sat around campfires after a restful day of procuring food. And it probably didn’t matter so much to dinner guests how long it took to roast the Olathe sweet corn.

You want to talk hardship? I just realized I am going to have to run cold water through my nose this morning. Who knew living without a microwave could be so difficult? (And before the Gaylens say anything, I’m well aware they have managed to go decades without one, but sometimes there’s just no help for the unwashed.)

No bike race, no microwave, no vacuuming (oh, wait) . . . I don’t know what the world has come to. We may all need to pray to the Flying Spaghetti Monster for the return of a rational world order. That makes sense, right?