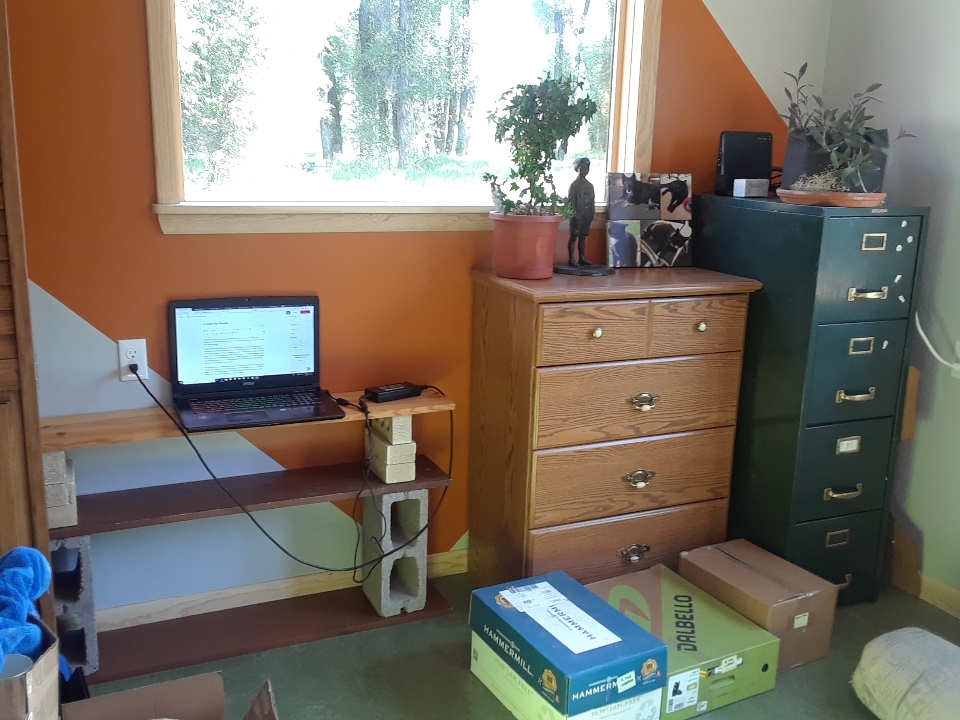 This morning I have set up shop in the Pumpkin Room, aka the guest room. I am currently wondering why we are trying to make the two smallest rooms in the house the most multi-purpose.

The laundry/mud/pet room is full, and unpacking has barely begun. We got our mud bench/closet installed two days ago, and are waiting for the counter for the pet station. The washing machine, which isn’t rocking much since they leveled it, is still vibrating the kitchen floor, and the machine itself (much larger than in the pictures) is walking away from its companion the dryer, also much larger than its picture. Plus, with all the hook-ups in the back, they are at least six inches away from the wall, so by themselves they take up about half the space in that room.

But this morning for the first time I am trying out the other multi-purpose room. My plan all along was to install a desk in here, but now that a file cabinet, dresser and mattress are all here, I don’t see room for either of the two desks we have in our storage shed.

The modem ended up in this room, and at the moment all of our art is sitting on the floor in here. As well as cushions from the loveseat that was the animals’ favorite piece of furniture. I thought the cushions might make them happy, but Oz is lying on the floor next to them, and Na Ki’o just walked right past them to go behind the mattress.

[Marrakesh, we have decided, is not homesick but just flat-out sick. I was ready to call the vet yesterday morning, because he hadn’t been eating or drinking and was spending entire days stretched out sleeping in one location, but then yesterday he ate some food, was a touch more mobile and had his eyes open, looking alert. So we’re keeping one eye on him and one finger on the vet’s phone number.]

I am liking the Pumpkin Room, despite its overcrowded condition. It could be as simple as me being used to eastern light in my mornings, back in the old days when I could sit in my chair that used to be my grandfather’s [and perhaps someone’s before him — I took it in for a repair to Miller Furniture (RIP) and Steve found a date of 1923 on the underside] and prop my toes up in the sunshine on the loveseat.

Now I can’t sit in my chair because it’s full of deflating balloons, and there is no morning sun in the Good Room where it’s located. So I’m in a rolling desk chair (no foot propping) with my laptop on a bookcase. Not far from a file cabinet that used to be my grandpa’s.

Only it’s not really a bookcase; it’s three boards, two cinderblocks and six white bricks. It’s been in my room for years, and that’s where I was going to go with it again, until the other day when I realized a desk was not going to fit along the north wall of the Pumpkin Room and thought I’d try it here.

Spacewise I think it works well, but now that I’m looking at it I’m not sure the statement is the one I’m looking for. I know the cinderblock-and-brick look is fairly collegiate (or it was in my day), but I’m not minding that. The top board is an unfinished piece of 1 x 10 pine that I probably once long ago rescued from my wood collection in the garage because I needed another shelf.

The other two boards, badly scuffed and showing their age, came from a set of shelves my dad built long, long ago. The dowels that supported the shelves are long gone, and I’m pretty sure it was five-six-seven shelves tall, but this is what’s left, these two shelves.

I could move this set of stuff that makes a bookshelf back to my room, but I have decided that the books going into the guest room — you know, where you want to impress the people visiting — should be the books that have always sat on these shelves, the ones that make me look all literary. (No fair asking whether I’ve actually read them or not.)

In my room I would like to put — and I know this will surprise you, to learn I still have these — the books from my childhood, Danny Dunn and the Three Investigators and my spare copy of The Phantom Tollbooth. Stories of magical babysitters and good ol’ Alvin and Shoie, solving neighborhood mysteries with the help of Alvin’s sister The Pest. The Mad Scientists Club.

You get the idea. And I have just the bookcase for them, the same bookcase they came out of. I don’t remember where I got the case, but I painted it myself, in very primary blue, red, yellow and green. Here’s the catch: it is 45 inches to the bottom of windows, which I insisted needed sills (which I like very much), and the bookcase is 48 inches tall.

Now, the north window in the guest room is taller, so probably the case would fit in here — except that it won’t. There is nothing in this room that says “primary colors.” And the books I reach for in the middle of the night for a quick, comforting read would be clear across the house instead of bedside.

We have an abundance of bookshelves, most of them currently in the storage shed, and in the interest of trimming down on Shelf-a-Palooza, which Dusty has not shown a great deal of enthusiasm for and which could cost me more pennies than I want to spend, I’m trying to figure out how to use what we already have. But I moved one shelf unit in yesterday and as I was cleaning it, thought, Wow, this is really cheap.

Another one, which is short enough to fit under the windowsill, has all its facings threatening to fall off. Another one has fixed shelves and just has never been a favorite of mine.

So I don’t know if I just put stuff where it will fit, damn the color scheme; use pieces we have that look run down; try to amp up Dusty’s enthusiasm for Shelf-a-Palooza; or find a new furniture store and buy new units.

I do have to say, I enjoyed my morning in the Pumpkin Room, which means I need to figure out the desk situation so that I’m not hunched over whatever bookshelf ends up in here. But don’t you worry: I have a Plan for that. Maybe. I’d probably better figure out my bookshelves first.

2 thoughts on “A Case for Books”