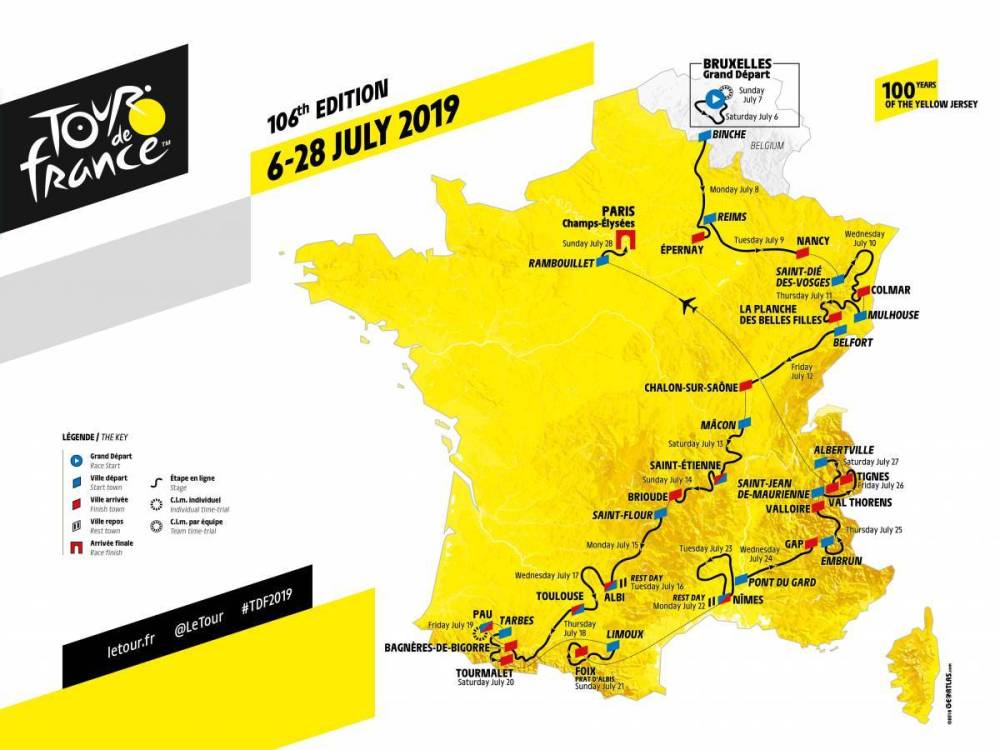 Today is the final stage of the Tour de France. If you’re announcer Bob Roll, who calls Durango (Colorado) home and was one of the first Americans to ride in the Tour, so you think he’d know better, you call it Tour “day” France, and make that “France” a tad nasally.

This is a French race, make no mistake. Sure, the contestants come from corners as varied as Japan and South Africa (I think there were three Americans in this race, two of whom should finish), and a Frenchman hasn’t won it since the great (and combative) Bernard Hinault in 1985, but the French invented the concept of grand tour racing way back in 1905, and this is their party.

Although I have started this before today’s stage gets underway, delayed for an evening start rather than afternoon across the world in France, almost all of the racing has been settled. Without seeing today’s stage, I can tell you who will win each of the four jerseys awarded. The only suspense remaining is the question of which sprint specialist will win the stage, which finishes with several circuits of downtown Paris, a circuit that takes the riders and us viewers past almost everything iconic about Paris: the Louvre, a statue of Joan of Arc, an Egyptian obelisk, a giant Ferris wheel, the Arc de Triomphe . . . I don’t even have to leave my armchair to see all the sights.

While much of each stage kind of seems like a group bike ride, today really is just that, until they hit the Champs-Elysees and bikers start riding like they mean it. Champagne will be poured, and the winning team — the same British team that throws more money at this sport than any other and which has laid claim to the winner now seven of the last eight years — will ride along with their arms wrapped around one another (I would crash so hard if I tried that), basking in the glow of their victory.

This year was almost a year for the French to reclaim their race. A few years ago a disgruntled Hinault lamented that no good Frenchmen were coming along. And while he may have been a beast on the bike, his savvy as a prognosticator was wrong wrong wrong, and several young Frenchmen have stepped up to the challenge.

Up until two days ago, two of them were among the top five finishers. Thibault Pinot (names that don’t look like they rhyme at all, but it’s Tee-bo Pee-no), was France’s best hope for gold, or at least the yellow jersey, despite sitting in fifth place. He was coming along and looking strong in the mountains, and then — as often happens in bike racing — something small happened off camera that totally derailed Mr. Pinot’s hopes. (My chat room makes a lot of pinot noir comments when he’s riding.)

Some cyclists tangled up, and in attempting to avoid the crash, he hit his thigh against his handlebar and tore a muscle. Not a bruise; a tear. He managed to ride the day after this happened, but on his way up the first real Alp in the race on Friday he fell farther and farther behind, tried an assortment of bandages, and following a hug from a teammate, got off his bike in tears.

That left France’s hopes pinned to the man then in first place, Julian Alaphilippe. (His name always makes me think of the Sesame Street magician who performs his magic by waving a wand and shouting “Ala peanut butter sandwiches!”)

Sadly, Mr. Alaphilippe will not be on the podium in Paris this evening, as much as not only he but an entire country wanted this. He had ridden above himself day after day, and the Alps finally cracked him. He will be fifth, which is still a darn impressive finish for him, and he told interviewers yesterday that he has no regrets, because he gave everything of himself there was to give.

He wore the yellow jersey for many days in this race, picking it up early, then losing it for a day, then fighting to gain it back one day later. He won two of the 21 stages, and hung onto yellow all the way across the Pyrenees, which no one really expected.

But this is what he did that makes him a winner in my book: every day, at the conclusion of the stage, they hold a ceremony to laud the various winners. And every day he wore yellow — he may now rank eighth overall among French riders for the number of jerseys he has received — they presented him with a new yellow jersey. And, I presume, a stuffed lion, mascot of Credit Lyonnais, sponsor of the jersey.

Well, on one stage it was raining, and a little boy in the VIP area backstage was shivering from the cold. Mr. Alaphilippe took over his brand new yellow jersey, wrapped the boy in it, and sent him on his way. How’s that for a souvenir?

So it is a bit sad that he cannot stand on the podium to mass acclaim from his countryfolk, but he wore the yellow jersey well and with an easy dignity, and it should be enough to make Mr. Hinault eat his words about no good French riders.

In the meantime, an ocean away, the country of Colombia will also be swelling with pride, because the rider on the British team that will take the grand prize today is 22-year-old Egan Bernal, riding in only his second Tour.

The Colombians have had a couple of prospects in recent years, and placed cyclists on the podium far away in France, but until today, none of them have climbed to the top step. But he’s there now, making all of Colombia proud. He only held the jersey for two days, and most of the world expected his teammate, a Welshman who won last year, to be the best rider from their team.

All this unexpectedness made for a great Tour for fans as well. Because of the dominance of the British team, which did once again win (but not until two days before the finish), the race has become a bit plodding and predictable. It took a charming Frenchman and a determined young Colombian who climbs like a mountain goat to make this race one of the more entertaining editions in several years.

Not that any of you who aren’t bicycle fans care, but I was once like all of you, and now I care, so sometime you might too. Vive le Tour!

One thought on “As the French Turn”