Massive technical difficulties: the internet was broken for more than two hours at home; Microsoft Word was uncooperative on one computer at work; and have you ever noticed how slow computers move when you need them to be fast? Here you go — it’s hardly worth the wait.

I think, before we believe anything I’m about to say, that we should remember that the plan a month and a half ago was to be done with construction by the end of June. Bearing that in mind: Dusty now says the plan is for a partial inspection to stamp final approval on the bedrooms and the garage at the Some Day Ranch by Aug. 2, so that Moving o’ Stuff could commence on Saturday, Aug. 3.

We need to also bear in mind that this is only a partial inspection, and does not extend to the Good Room, laundry room or the bathrooms, even though we do already have running water – as long as the well pump breaker is flipped.

Yes, Things Have Happened, even if none of it is the glamour of stucco. (Dusty is giving the stucco guy until tomorrow before he calls to see what has happened to him.) Lynn’s toilet and bathtub are sort of hooked up, and water has been run in my steam shower, enough to determine that no one is sure how the tub is supposed to fill (the “spigot” seems to be halfway up the wall, well above the tub, coming out of a metal pipe with threads, implying that perhaps we’re missing a piece). My toilet is standing close to where it will sit (okay, those were funny verb choices, and I didn’t even plan it).

Handles are on interior doors, which instantly takes me back to my childhood, when the only radio station we knew of was KGUC, and they were playing some classical piece and taking call-in guesses as to the title, and we had Terri call in to suggest it was “Handel’s On the Door.” She did not win, although we all thought she was funny.

[The internet appears to be broken, so I am composing this in Microsoft Word, which objects to my syntax on a nearly-every-sentence basis.]

Lynn and I were summoned to the house yesterday for a late-afternoon meeting with Dusty while Sam trimmed all around us, and that’s when we learned all of this. Then it turned out we had to decide things. Lots of things. Many more decisions than I was expecting, so many that it wore me out.

These were many more decisions than I was expecting, and it did not escape my notice that we didn’t discuss so much as a single non-closet shelf. I have plans for plenty of those, although I doubt very much I have planned enough for the barrage of questions Dusty will have.

I don’t know when we will worry about those shelves, but Dusty is trying to get the closets and pantry — did I mention the decisions that needed to be made there, too? – done in order to convert the garage from a woodshop into a storage facility by August 3. (I don’t know where the shelf work takes place after that.)

I’m also not sure when the “construction clean” that he mentioned yesterday will take place, if we fill bedrooms with furniture and boxes on Aug. 3. Because I assume installing cabinets and countertops will generate plenty of construction dust, and that all takes place after Aug. 3, still with no set schedule.

I also don’t yet have a boiler report for anyone, and by anyone I mean my mom. Dusty yesterday said he’s told the plumber the boiler can be put in “any time now.” Neither Dusty nor I could remember if it’s a gas or electric boiler. It seems like it ought to be gas, but for some reason we’re thinking it might be electric. That might be a throwback to when I was trying to go all-electric in the house.

Dusty did say that Ben, our plumber, is a bit overwhelmed. He has been the journeyman for several years for another plumber, but that man retired and turned his business over to Ben. Ben has the plumbing part down, but he’s trying to figure out how to fit in all the bookwork. He asked Dusty when one finds time for invoicing and paying bills, and I doubt he liked Dusty’s answer, which was to get up early and do it before the “work day” starts.

It’s part of the “joy” of owning your own business, although I guess I could advise him that after 20 short years he might be far enough along that he could leave work for two hours during one of the busiest weeks of the year to make an endless pile of decisions about things inside closets.

Oh, I forgot to report we have gas now. Yes, that sounds like a personal problem not to be shared in polite society, but it means that Atmos finally showed up and ran a natural gas line to the house. They ran this across the neighboring lot, and when I asked about that, Dusty just shrugged and said, “That’s where they put the line.” I have no idea what happens, years down the road, if the line has to be dug up for any reason and a neighbor has put some very elaborate, expensive driveway on top of it (because it’s really the only place for their driveway to go). I’d like to think this would be Atmos’ problem, but we all know how that works with big companies. Nothing is ever their fault.

So, to recap: With Handel’s classic On the Door symphony in the background, and full of gas, we may – or may not – be able to start moving possessions into our Some Day house four Saturdays from now. Someone had better get serious about packing.

Gas line, almost all of it on the neighbor’s property. Hope that’s kosher. 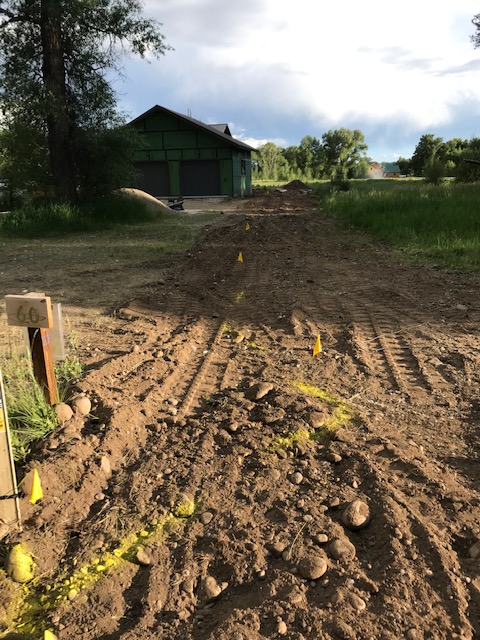