Today was a busy day to get ready for an even busier day tomorrow. This may have to tide you over for a couple of days. 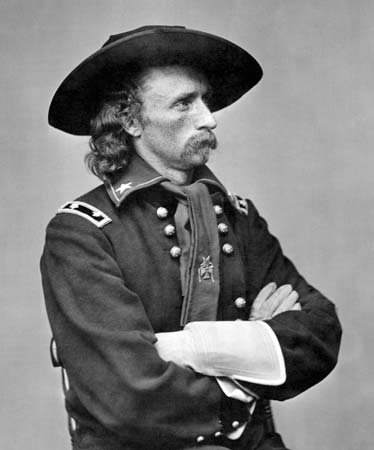 On July 4, 1876, citizens of the United States of America celebrated their nation’s centennial, all of them oblivious to a huge military defeat to their west. Not until July 7 would readers of the New York Herald open their papers to learn of the loss of nearly 300 members of the Seventh Cavalry in the coulees of what is now eastern Montana.

George Armstrong Custer led his men into massive defeat on June 25 above the banks of the Little Bighorn River. The dead bodies of five entire companies were discovered by soldiers approaching from the north on June 27; these soldiers escorted survivors to the steamship Far West over the next three days; and then a general held the steamship, with its cargo of badly-wounded men in need of more medical attention than was at hand (along with a horse named Comanche, deemed “the only living thing” to have withstood the onslaught brought forth by the Lakota and Cheyenne), for another three days while he tried to figure out how to “spin” the report for public consumption.

At last the steamship was given its leave, with instructions to move as fast as possible for points south and east, and Master Grant Marsh “sped” at 13.5 miles per hour, day and night, down the sandbar-ridden Yellowstone and Missouri Rivers to Bismarck in the Dakota Territory.

Civilization at Bismarck included a newspaper, whose reporter had been “embedded”  with Custer’s campaign. The reporter himself, Mark Kellogg, died on a remote stretch of the Little Bighorn, but his dispatches were recovered and turned over to his editor, who telegraphed 40,000 words over 24 hours to the Herald.

So it was that almost two weeks after the battle, three days following the celebration of the nation’s birth, Americans learned of the demise of a sizable chunk of the Seventh Cavalry — the chunk (a technical military term) directly under the leadership of Custer.

Up on the Yellowstone, over the course of three days, General Terry had composed two dispatches. The one for public consumption assigned no blame; the one for the military brass placed the blame squarely on Custer’s shoulders.

Now, we should understand that General Terry had no love for his rather insubordinate subordinate, so it was no hardship to lay the blame at Custer’s dead feet. And Custer did himself, and all the dead men who obediently followed him, including several members of his own family, no favors, but really the entire exercise was a failure from every angle, with plenty of fault to go around.

The time of the Great Plains great native cultures (which we should acknowledge would not have arisen as they did had not the Spanish brought horses with them while setting out to conquer the entire “New World” for their own vainglorious purposes) was coming to a close in 1876. There were too many white (and black) people pushing into the plains, or moving across them. The transcontinental railroad had already severed the plains, and the sport of shooting bison just for the fun of it was a real “thing.”

Numerous treaties had already been signed, and almost all of them broken. Giving all of South Dakota to the Lakota lasted only until it turned out gold was in them thar Black Hills — and one of the people to lead the scouting for that was Custer, who had found himself rather at loose ends since the Civil War, where his genuine heroism made him a brevet general at a very young age.

But Custer, a brash, hubris-filled man of gigantic ego, tended to get in his own way, and he alienated most of his military superiors by doing as he pleased rather than as he was told. He lost his brevet rank and got assigned to a series of posts on the western frontier, which is how he found himself in South Dakota in 1876.

Why anyone expected the Lakota and Cheyenne to adhere to their end of treaties when no one was worried about keeping the other end I don’t know, but as the white nation celebrated a century of achievement, these native peoples were following rhythms much older, so they left their reservations to go summer hunting.

A huge encampment, larger than any previously known, set up shop on the western bank of the Greasy Grass River. It was not a military camp; while there were plenty of battle-ready men (and a handful of women), the camp also included their wives and children, along with their elders.

The U.S. military knew only that natives had left their reservations, and its goal was to send three columns, one from the south of Wyoming, one from the north out of Montana, and Custer’s, from the east, to try to push all the natives together and get them back where they “belonged.”

We’ve already seen how well communication worked that summer, so essentially these three columns operated completely independently, with no awareness of the others’ locations. The column from Wyoming ran into some action from a band heading for the Greasy Grass encampment. This column promptly turned around and went home. There. Responsibility absolved.

The north column largely did nothing and went nowhere. There doesn’t seem to be any fallout from their failure, either.

No, everything landed on Custer, who also did not go where he was told nor do what he was assigned. He further failed to listen to his scouts, actively disbelieving their reports of a huge camp, and he and his brothers desecrated a Lakota death site and thought themselves funny.

Because he didn’t get along with some of the men under his command, he sent two officers and their companies off on on a search he assumed would lead nowhere, giving all the glory of the capture of natives to himself. No one was listening to anyone else, and every officer involved in this debacle pretty much did what he wanted.

Major Reno ended up engaging the giant encampment first, down in the river valley after fording the Little Bighorn (or Greasy Grass, depending on which bank you were on). It proved to be an “uh-oh” moment as they quickly realized the enormity of their miscalculation, and Reno should not get credit for “leading” a retreat back across the river. (Like a very large number of military people in this story, Reno was good friends with Demon Rum.)

Captain Benteen — the most interesting factoid about him is that he liked to send letters to his wife with drawings of his penis on them — ended up on top of a bluff, where what was left of Reno’s command staggered to a kind of safety, and instead of using his time to set up a viable defensive perimeter, he took a nap. He had already disregarded the last note anyone ever got from Custer, to bring the pack train (with ammunition) and to hurry.

Both of these men and many of those under their commands managed to live to tell the tale of the Little Bighorn, but not really due to any military prowess. Instead, after wiping out Custer’s five companies to a man and harassing Reno-Benteen all the following day, the Lakota and Cheyenne simply melted away, the giant camp dispersing as spontaneously as it had begun.

While several men survived to recount their version of events under Reno and Benteen, the story of what happened to Custer and the 214 men under his command fell to the victors, although “America” was not interested in these accounts. (Walter Campbell spent decades tracking down and recording many native accounts from those present at the battle, but his work went unpublished.) So what exactly happened to Custer?

Tune in at some later date for the exciting conclusion.

One thought on “America’s Last Stand, Part I”