This weekend, right on schedule, might be the high-water mark for the Gunnison River — and it is high.

Lynn reports that there is some flooding at Almont, where the uncontrolled East River meets the dammed (but not damned) Taylor River to form the Gunnison. And the sheriff has closed most, if not all, of the Gunnison above Blue Mesa Reservoir to water activities such as boating and fishing. But fears of widespread flooding are receding, even if the river isn’t just yet.

For those of us with property close to the Gunnison River who did not buy flood insurance, this is good news.

(Now, before we ever bought the property, the first thing I checked were the county’s flood maps. We are not in the 100- or even 500-year floodplains, according to the maps. And we were going to buy flood insurance anyway, but the one quote I got was only for $250,000 of coverage. One of my many friends named Mark tells me that’s as high as any flood coverage will go. I guess some help is better than none, but that doesn’t seem terribly helpful overall.)

The better news is for Lake City, subject of one of the lead stories in today’s Denver Post. [I dropped my subscription months ago, and I no longer have access to the daily version, but every Sunday a paper appears in my driveway.] I did not realize the extent of the damage, but upwards of 60 avalanches slid mountains-worth of debris toward waterways, and the fear has been — and still is — that a sudden melting could dump all this debris into a jam that would cause water to flood the entire town of Lake City.

But now officials are putting that risk at about 10 percent, and all the emergency management people who have poured into town are starting to recede away. Now Lake City is looking to regain its tourists, because if we in Gunnison think we live and die by our summer tourist traffic, we have nothing on Lake City.

Lake City already got to experience a dearth of tourists a few years back, when forest fires threatened the area. The fires ended up burning out Creede, to the south of Lake City, but the tourist damage to both places was about equal. And devastating.

Now, the good news about this winter’s snows for places like Creede, where water has gone into the floodplain but not threatened any structures, according to today’s Denver Post story —

[Here is what else I would like to say about today’s story: never in all my years have I heard Alferd Packer described as “the town’s infamous cannibal hiking guide.” Elise Schmelzer, who otherwise put together a decent article, appears to have no awareness of who Packer was. Perhaps she should have read my post about him before she described him thusly.]

— and Lake City and most of points southwest, is that this one epic winter has erased years of extreme drought. It could still come at a horrible price, if Lake City or Creede or Ouray flood, but we should all keep our fingers crossed that snowmelt will continue to dwindle rather than roar out of the mountains. Then we can avoid the elemental pestilence of Water, and restore the Earth, and make a recurrence of Fire seem less likely.

Which leaves us with Wind. And that’s been more pronounced this June in Gunnison than usual. We’ve had some gusty days this month. And back at Riverwalk, the lot that almost everyone thought we should buy has lost at least one cottonwood with every storm.

When we went out to look at lots, one — the one we now own — was actively for sale, but the lot next door was owned by the same people, who are looking to eventually divest themselves of all their lots. Dusty, looking at the building envelope, thought we’d be better off with that lot, and Cathie Elliott, offering real estate advice, said resale is easier farther away from a highway, even if it’s only one lot removed.

But we decided we liked our kidney-bean-shaped lot better, so we disregarded all advice (and the higher asking price, because we did inquire) and went with the one we have. Where so far all our trees are intact. Meanwhile, next door, half a spar sticks out from the tree that collapsed last year. Two have fallen this year across the road, and another lies snapped halfway up, its top snagged by nearby trees.

Cottonwoods have, in tree terms, a relatively short life. They’re no sequoia, living for millennia. If a cottonwood gets a century, it’s had a good life. And a lot of the trees on our lot are having good lives.

Before we bought (doing my due diligence) I talked to Dario of Tree Tamers. He told us to expect to lose about 10 percent of our trees on an annual basis, because they’re getting up in years. (Which is why I tasked Dusty with saving my baby cottonwood that’s been right in the thick of construction. And so far Dusty has been up to the task.)

So then the concern becomes not losing a tree on top of the brand-new construction. I feel reasonably sure insurance companies would try their best to wiggle out of that damage even more than they try not to pay out flood claims.

And I have decided the biggest risk comes not from our own trees, but next door, where for whatever reason the stand seems to be more brittle. (Or maybe their trees absorb all the big gusts before they get to ours — what do I know?)

So I keep looking at the tree nearest us, which seems hale and hearty (although cottonwoods can be deceiving creatures), and wishing I was better at geometry, because I want to know how much of that tree would land on our house if it fell.

A giant evergreen toppled onto a county-owned building last year, and while the county initially said the tree hadn’t caused much damage, they were out there this spring replacing the entire roof. Maybe a decaying cottonwood weighs less than a solid evergreen with weak roots. Maybe. What do I know?

All I know is, the elements are out there, and they do what they want. We puny humans can only watch, and hope for the best.

I put it to any of you math whizzes out there: how likely is this tree to land on our house if/when it falls? You can also see the remnant of the one that crashed last year. 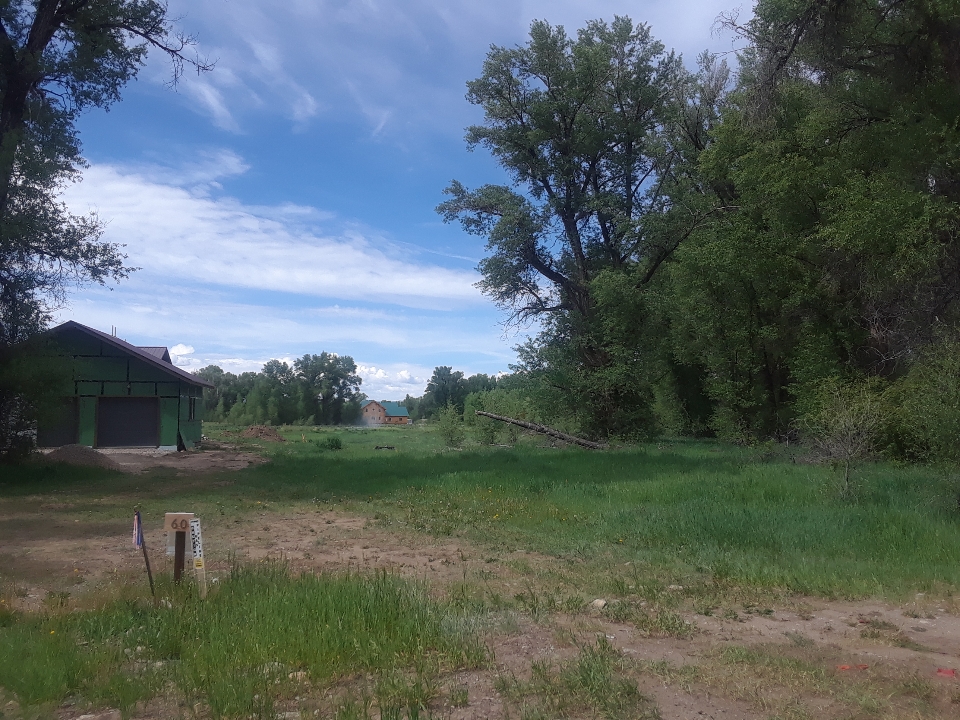 One thought on “Elemental”