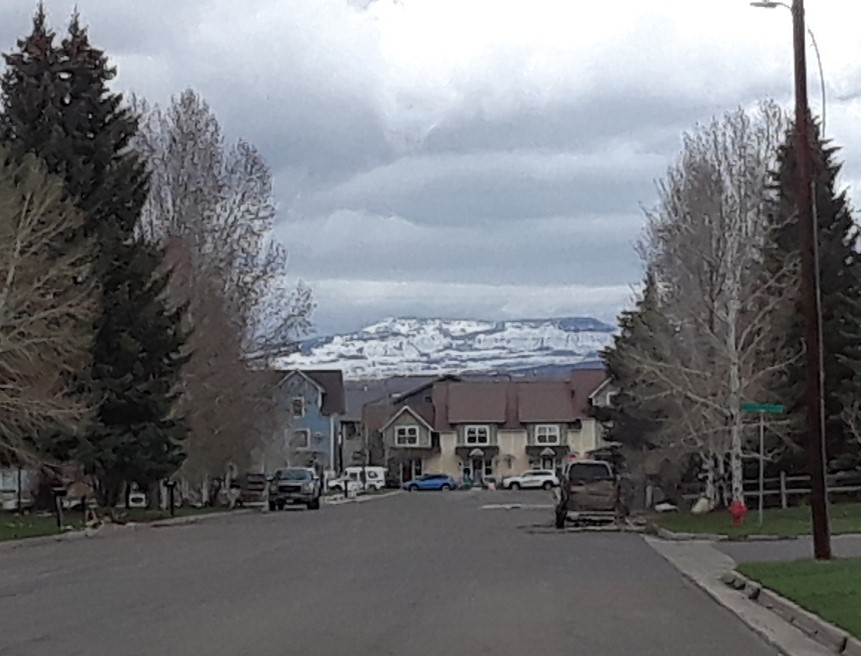 Topics, topics, everywhere, and not a one to bite.

After hours of gloom, the sun is shining tepidly, but I am still feeling like a wan Karen Carpenter: Rainy days and Monday always get me down.

To be perfectly honest, the “always” is incorrect. “Rarely” would be better, but today is that rare day, and I’m not sure why.

This post is very late, and likely to be short (hopefully not terse). I just couldn’t land on a topic, although several suggested themselves and I even got started on one, using up all my blogging time to no avail. (Perhaps it will surface on a different day.)

And then I thought, Gosh I haven’t talked about the weather in days — how will my readers function without my input on this vital topic?

The Denver weather this morning was promising a substantial drop in temps in the metro area, and then the guy kept calling for 10 to 20 inches of snow in the mountains. If that doesn’t perk up your propeller, what will?

However, I noticed he never showed anything below Aspen on his map. And my weather, Weather Underground, is calling for rain all day into tomorrow, but no snow. I’ll take it, although I wonder if all this rain while we still have a lot of snow in the high country is conducive to more flooding.

[One of the meteorologists who appears on CBS occasionally tends to phrase her reports in an unfortunate manner, always seeming to suggest that you should be happy to get socked with tornado warnings or big hail. “It’s looking really good in South Carolina for high winds.” Someone should suggest rethinking her descriptors.]

So far the rain is being held at bay by a thin sun. And I’m okay with this. I don’t generally mind rain, and it is helping green everything up, but it’s been rainy and gloomy for a few days and, well, I live in Colorado and not the Pacific Northwest for a reason.

Mondays also aren’t usually on my hit list. When you work at a gas station, or an airport, or a newspaper, Mondays aren’t even necessarily the start of your work week. But even when they are, I’ve always enjoyed going to work (really), so it’s not a bad thing.

I even got off to a more productive start this morning than I often do, although that productivity has fizzled as the day has progressed. I went from timely animal chores and moving laundry around to a series of small hiccups that seem to be adding up to a big gloom.

I am having such constant battles with Carol’s garage door that I am ready to abandon her garage, and while I was trying the one option that succeeded the other day — unplugging and replugging — I knocked over an uncapped can of some toxic lubricant that started spewing everywhere. With no cap at hand, there didn’t seem to be anything to do but move it outside to let it spew all over the patio.

If that’s not a Monday happening, then nothing is.

I also went to court, where the county has finally impressed its metal detector into service. To conduct any business in the courthouse, you have to go through this. Today I thought I’d be smarter, and I emptied all my pockets, but I still set it off, and got hand-wanded, where my belt buckle, jeans rivets and boots all set it off.

Now, see if you can spot the flaw in the county commissioners’ plan: the deputy manning the detector (and x-ray machine — it’s the whole works) asks where you’re going. Since I am going to court, he confiscates my pocketknives, returning them as I leave. But if I said I was going to pay my water bill, he would hand me my knives — or my gun, he said, as long as I have a concealed carry permit — and leave me free to wander about the courthouse unsupervised.

I guess, in this day and age, you have to try something, but this feels more like an encumbrance than real security, particularly if all you really want to do is drop off your water bill. And so far, of the county’s million buildings, this is the only one with a metal detector. (Although they did last year remodel the social services building so that public access to all the offices is restricted.)

At court, by the way, Y was put back into drug court, which is a diversion attempt to keep substance abusers out of jail. We all thought it worked the first time he did it, although in retrospect he was mostly gaming the system rather than working on recovery. I don’t know that I expect a different outcome this time, but I also don’t see putting him in jail as an effective long-term deterrent. And if he were ever to be sent to prison, I think that would turn a good young man into a thug and perpetual felon.

So I have no answers there. I don’t feel like I have answers for much of anything today. It’s kind of like the way I shaved my face this morning: as fuzzy as I still am, I don’t think I accomplished a darn thing.

Maybe if the sun keeps shining, Karen Carpenter and I will part ways, but for now, I’m feeling her pain.