Well, we’re live. There’s a sign next to our mailbox (the only place Josh could find to put it in all this snow), there are pictures at clarkeagency.net, and many of the local realtors are going to be touring this morning at 9, which means this entry will be posted really early or really late, because Oz and I need to be out well ahead of the tour.

When I was looking for houses before I bought this one, back one-quarter of a century ago, I know I viewed at least one while people who lived there were in it. But I guess that isn’t kosher anymore. Maybe it wasn’t back then, either, even if it happened.

A few months ago, I had friends looking to sell their house, and on my way to work I passed the pair of them, hiding behind a building. It turned out their house was being shown, and from this vantage point a block away, they were trying to see who the prospective buyers were.

I naively thought you would have some idea who your purchasers are by the time an offer is tended, but it turns out, not so much.

I told Audrie and Josh, I don’t care what color our buyers might be, nor what religion, maybe not even what their politics are — but I’d really rather not sell to college students. Not that college students are inherently bad. I was one myself once.

But I worked at the airport for 16 winters, one of the few ramp employees who wasn’t either a retiree or a college student. And one year there were two college students, one of them named Max, who were roommates. The genuine glee they exhibited when telling the rest of us how they had trashed their rental house still takes me aback.

And I went so far as, the other day — after a snowplow had come by but only to the middle of our street, because college students left their stupid snowmobile trailer parked in front of our house — looking up the address of the owner of the house next door, ready to write and tell him he needs to pay attention to how many people he is renting this three-bedroom house to. (I of course didn’t get as far as actually writing the letter, but it gave me some satisfaction to at least contemplate it.)

I would be very sad if someone drove a motorcycle into this house, even if I’m not around to see it.

There was a couple here in town some time ago named Roberts. John was one of those community fixtures. He owned a car dealership (now with a different owner but still bearing his good name) and donated to every local cause there was, plus giving of his time and himself. Lois was much more reticent, but the outside of their house was a thing to behold under her nurturing hand: immaculate lawn, beautiful flowers.

(I still think one of my proudest moments was rather inadvertent, but at a going-away party for them — they were retiring and moving to Grand Junction for the lower altitude  — someone from the newspaper was going around collecting comments about the Robertses, which were then published along with a photospread of the party. John of course received many well-deserved accolades, but only one person said something about Lois. And that person was me.)

When I made some comment to Mrs. Roberts, perhaps at that party, about leaving her beautiful lawn behind, this gracious lady said she’d told the young couple who was buying their house that they were absolutely not to worry about the condition of the lawn. (Many years later, the lawn still looks quite nice, still with lots of flowers in the summer.)

Am I going to be that gracious? Probably not.

I don’t really care about the lawn, which, despite an entire transplant and many subsequent applications of grass seed has never looked tremendous, and I’m sure the first thing any new owner will do is tone down the exterior paint — but I would really like it to go to someone or someones who are going to regard it as their home rather than just some stop along life’s journey that isn’t worth any respect. No Maxes who think it’s funny to see how much havoc they can wreak upon someone else’s property. No nameless boys who make themselves so thoroughly unwelcome throughout the neighborhood with their overabundance of vehicles and parties.

But unless the purchaser  is a client of Josh and Audrie’s, we may not know who it is up until closing. I gather clues can come in the form of financing being tendered: cash offers, while ideal, are a more likely indicator of an investor. Certain kinds of home loans are only awarded to people who plan to occupy the house as their primary residence, so while we ought to want a cash offer at full price, I’m going to hope it’s someone seeking the right kind of loan. Audrie did say several families in the area have gotten themselves pre-qualified, waiting for more properties to come on the market. Maybe one of them will want to buy our house.

And then not want to move in until June.

Dusty and I had a short conversation yesterday, marred by his admission that the rest of his family is down with the flu. (Away! Be gone!). The electrician is planning to wrap up at the new house on Friday, and the drywaller is impatient to get started. But then I thought he said that might not happen for a couple of weeks. I know our house is festooned with wires, and there are plumbing pipes sticking up here and there. Yesterday I was mostly trying to seek an assurance that we might be able to move in sometime in June, but I’m not sure I got a definitive “yes.”

Well, if I work at this I can get it posted before I leave the house at an nearly unspeakably early time, but I would be remiss if I ignored Colorado’s weather yesterday. (And then it turns out posting the photos just takes too long, so posted after, rather than before.)

It was actually easy to ignore the weather in Gunnison, where the only snow that landed did so on Carol’s driveway (I never think to budget time for shoveling it, and it always needs shoveling), and we were a trifle breezy. But elsewhere in the state . . . every time I checked the road map the state was covered with red lines, meaning closures. This at one point included Monarch Pass. South Park was closed most of the day, along with nearly every road leading east of the Front Range. (Those are still closed today.)

Denver’s airport closed completely for only the fourth time in its history, and we at Pat’s Screen Printing may be at a loss for anything to do today if trucks were unable to make it out of Denver last night. No wonder we all talk about the weather so much.

Here are a couple of CDOT camera shots from yesterday around 5, in South Park and on I-70 near the Denver airport. Glad I wasn’t trying to get anywhere yesterday. 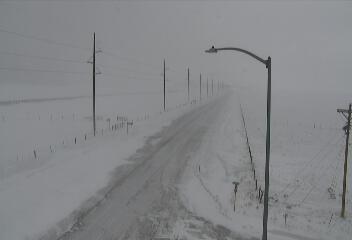 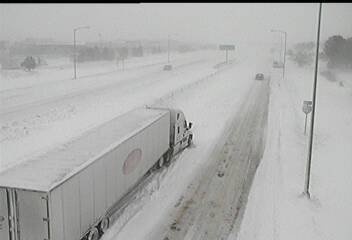