The State of Colorado appears today to be: snowy. Statewide. Statehigh. If you want to take a Sunday drive, you need to go from Grand Junction to Glenwood Springs, where it is only rainy. Maybe you can drive to Utah, but we’re only paid to worry about roads in Colorado, so there’s no color-coding provided here for other states.

This is the Cotrip.org camera map as of 8:15. The key is nowhere to be found, so you have to make some educated guesses. Over the years I’ve managed to deduce that tan is best. There is no tan anywhere on this map. Green is wet but relatively easy driving. Then come three shades of blue, each progressively darker and thus more ominous. The only scrap of really dark blue I can find is right above “Rio” in “Rio Grande National Forest.” (It’s practically like looking for Waldo.)

And then there’s black, a color I hadn’t seen before this winter. I live at the western edge of that black spider emanating from the center of the state. (The red lines indicate seasonal closures and aren’t taking part in these varying levels of danger to one’s travel. Well, if you tried to travel them it would be extremely dangerous, so you’re free to count them if you’d like.)

If you click on the cameras dotting the map, which you can’t in this screenshot but can at Cotrip, which appears to be experiencing its own heavy traffic this morning, all the pictures look very similar: lots of snow, but the sun might be trying to shine.

Lynn says her weather keeps getting downgraded, but this is the e-mail I got in the middle of the night:

“This is an alert from CodeRED Weather Warning. Moments ago, the National Weather Service issued a Winter Storm Warning for your Irwin St location from 11:36 PM March 2 until 6:00 AM March 4.

“Including the cities of Gunnison and Cimarron

[Cimarron is not much of a city, or a town, or barely even a wide spot in the road. It’s on the way to Montrose, and I did once stop and buy a t-shirt there.]

“1135 PM MST Sat Mar 2 2019 …WINTER STORM WARNING REMAINS IN EFFECT UNTIL 6 AM MST MONDAY… * WHAT…Snow, moderate to heavy at times. Total snow accumulations of 3 to 7 inches expected in and around Gunnison with amounts exceeding a foot near Cerro Summit. Winds gusting as high as 35 mph. *ADDITIONAL DETAILS…Travel will be very difficult to impossible, especially over Cerro Summit. Blowing snow could significantly reduce visibility.”

So apparently we are the calm before the storm. Or the forecast is wrong. I’d be okay with that.

Yesterday I went out multiple times with the roof rake to pull off the leading edge that’s been slowly creeping down from the roof apex. I should have saved myself the effort, because this is what happened this morning in mid-30s temperatures:

So I have cleverly managed to trick Lynn into going out to shovel while I am in here blogging. I suppose I should go put my back into it, except that I feel a need to report on immediate road conditions: the street in front of our house.

The street in front of our new Some Day house, on a dirt road, is in much, much better shape than this city street. The city did send a single plow to the Palisades yesterday, where the driver made such a half-assed effort that it was a complete waste of taxpayer funds. Lynn, who watched him plow, felt it would have been more effective had the blade actually been on the ground, but what does she know?

I went to co-worker Ben’s house yesterday to get moving boxes, and his neighborhood, three times as dense, housewise, as mine, was in worse shape. For a bad minute, I thought I was going to spend the rest of my weekend in the middle of his street. Many of the east-west streets in town are not quite as bad as these development pockets, but they’re not good either, and one of Lynn’s co-workers gave up on trying to deliver the mail to a trailer park when he almost got stuck. On a city street.

I’m giving the city’s new plow plan an F so far. I know it heated up suddenly, but this shouldn’t really be a surprise, given these last few winters. And when you’ve left so much snow on streets all over town that people can’t get out of their own driveways and mail can’t be delivered . . . well, this is what failure looks like.

I’ve gotta go shovel and then figure out where I might possibly take Oz for a walk that I won’t lose him in a roadway lake. 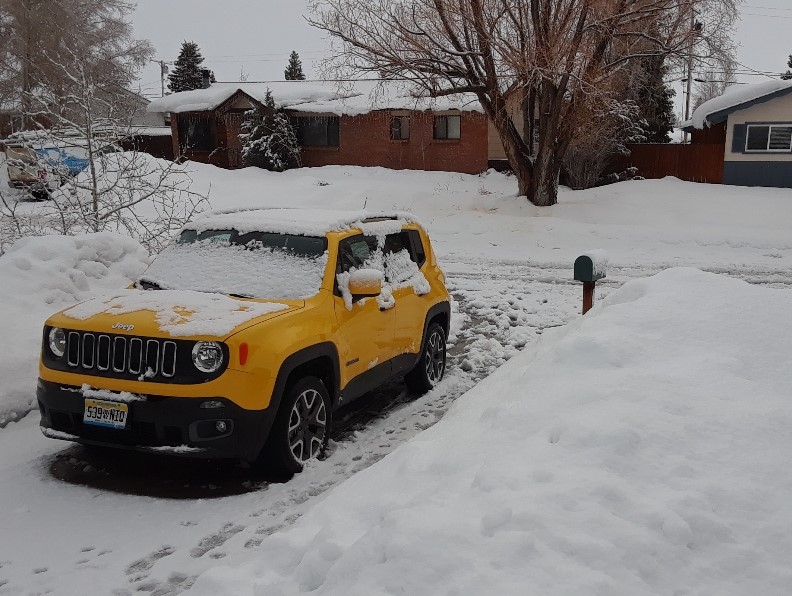 While we will never lose Lynn’s car in a snowdrift (it can glow its way out), it is under the little snow we got yesterday that didn’t immediately turn to water. Right behind her back tire, stretching into the middle of the road, is four inches of standing water intermingled with slush.