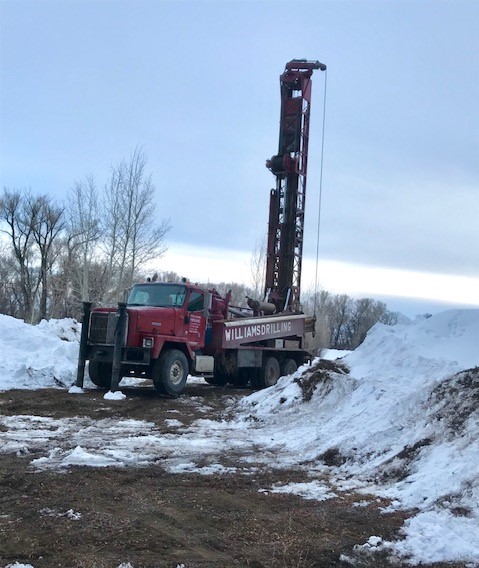 Dottie Williams and I go way back — way back to childhood, although we weren’t ever close friends. We seem to run into each other more and more as we get older (and better, I’m sure).

At some point a few years back she came in to get some t-shirts for her new business, Gentle Paws dog massage. We took our aged dog Ashoka to see her in what I figured was a very iffy experiment: poor Ashoka had the world’s most sensitive skin, and while she wanted to be petted, she could barely stand to be touched. But she let Dottie massage her for half an hour, and it really seemed to help.

So after we got Oz and he was having a bunch of stomach issues that seemed stress-related, I took him to see Dottie. He may love Dottie more than anyone else in the world, and she seems to return the affection. Love just oozes out of her hands.

However, Dottie’s day job is running her husband’s family business, Williams Drilling, and as construction has ramped up around the valley, so have demands on Dottie’s time, and she’s cut back on her dog massage.

Except when she swung by the other day (her office is diagonally across the street from Pat’s) to tell me they were ready to drill our well. I was on the building rather than in it, trying to address a leak in the ceiling (with considerable help from Kara’s husband Geoff, we stopped it, although we never did identify where the water got in), but Oz wasn’t sad: Dottie and her magic hands loved on him for several minutes. All I got was a message to give her a call.

So their drill rig, which you may recall had been scheduled to go out sometime in December, finally made it out to our house late Thursday. I believe a broken hydraulic part kept the rig from setting up shop when they initially scheduled us, and then I assume they moved on to other jobs. It’s not like we needed our well in the interim.

Friday morning I took Dottie a check, and here’s how little I go into the Savings and Loan building (not the bank — I’m in there all the time — but the building adjacent to the bank, which is technically an association and not a bank): they moved their office from the back of the building to the front five years ago, and I didn’t know this.

Dottie was on the phone when I got there, so I was wandering around the office, trying to find evidence of their own snow-related ceiling collapse from Monday. She said it had made a huge mess, but they cleaned it up pretty well, because I never did find where it happened. But I did find this on their bulletin board:

[I’m not going to remember all of it; you’ll just have to go with what I’ve got, or visit Williams Drilling yourself.]

I laughed. Out loud.

Dottie extricated herself from her phone call and went to work updating our estimate. Lynn had optimistically requested this estimate in the fall of 2017, months before we even put an offer on the lot — although it’s probably good to go in knowing what your water situation might be like. The estimate, based on a nearby well they drilled, was for 50 feet.

(While on the roof at Pat’s with Geoff, I learned that Geoff’s parents had once lived in Gunnison, at the far end of the sprawling Castle Mountain subdivision north of Riverwalk, and they had to go down 300 feet plus to reach water for their well. See how educational shoveling can be?)

Our well got started and finished on Friday, so they clearly didn’t have to go too far, but Dottie won’t get me a bill and I won’t get a measurement until sometime this week. And I don’t know if they’re finished or not, because when I was there Friday morning she asked if I wanted “constant pressure.” “Yes?” I said, tentatively.

Dottie’s husband Rick was there, on the mend from shoulder surgery, and he spoke highly of it, saying they had installed that frequently out at Riverwalk, and people seemed very pleased. He also said this would eliminate the “pressure box” the plumber might put in, which I’m hoping is a pricey component of the plumbing bid.

While most of our subcontractor bids came in 10 percent higher than the house Dusty completed last summer, the plumbing bid was substantially higher. Some of this seems to be a matter of transition: the plumber Dusty has worked with for years (a city league volleyball companion of mine from back in my nearly athletic days) is turning more responsibility over to his assistant, who thinks prices need to be increased. Why couldn’t we have reached this conclusion one house later?

But some of the increase apparently is from building in the county rather than the city. No matter how diligent we thought we were being, with Lynn getting well costs well ahead of time, we missed a lot of basics: increased costs for electricity, sewer, water we don’t yet have but keep getting bills for . . . so far I’m not seeing the financial appeal of country life.

So I’m hoping that some of the increase came from anticipation of a pressure tank, whatever that might be, which we now won’t need because I authorized upgrading from a $100 “control box” to an $1,800 “PID 20,” which will provide constant pressure and allow us to run the dishwasher and take a shower at the same time, like regular ol’ city folk.

Now, Gilly at work and my mother have been filled with well questions, none of which I can answer. Still. The well is in, and I have yet to learn anything about it. I have questions, too, but they might need to be directed to the (deep breath) Upper Gunnison River Water Conservancy District. (How’d you like to be the one to answer that phone all day?) Our water bills get paid to them, and it’s for “augmentation” from Blue Mesa Reservoir.

As I understand it, this protects our well from being shut off in the event of a “call” on Gunnison water from a user with senior rights who is downriver from the reservoir. This could include thirsty cities like Los Angeles and Phoenix, and water would be released on our behalf from Blue Mesa. So we can continue to have constant pressure.

There are two questions I have about this: what happens when Blue Mesa, which was down to 30 percent of average last year, doesn’t have the water to release? And what happens if a senior water user between us and the reservoir needs more water?

So many questions, so few (as yet) answers. But another piece of our infrastructure is in, and so we are progressing. 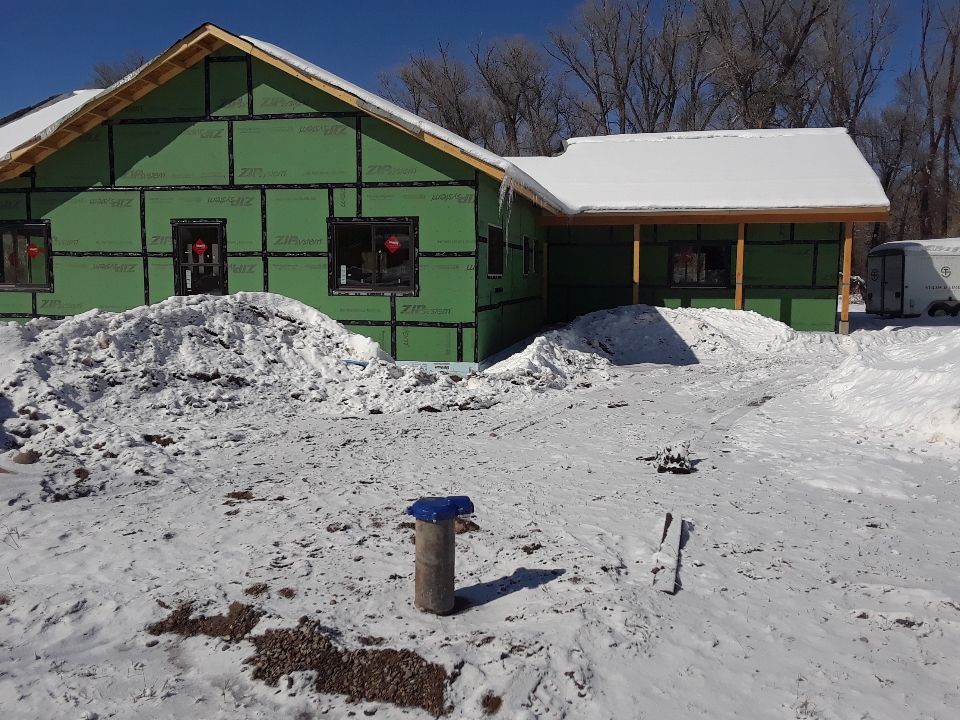