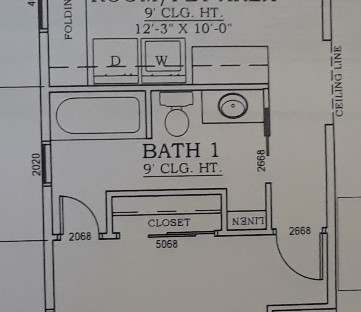 I’m feeling very cranky this morning, and a little dizzy. I avoided antibiotics, but this has left my ears stuffed full and still crackling since the beginning of the year — and I am tired of it. Particularly if it’s going to make me dizzy.

I just spent 15 minutes rearranging three different blog posts, because I took a photo of the courthouse lobby well after the fact and then posted it to the wrong post. Sorting that out took longer than I thought, but now all is right in the realm of courthouse blog posts.

The main source of my crankiness this morning is nothing you want to know about, because I’ve already run the topic into the ground, but I can’t help it: I am really, really unhappy with how the bathroom in my new house is going to turn out.

This is what you should do: the next time you are standing before your bathroom sink, or perhaps before your toilet (you might be sitting, in which case reverse this exercise), or as you hop out of your shower: envision a wall 30 inches behind (or in front) of you. Thirty inches of movement. That’s what I get. In front of a too-small vanity with a too-small cabinet.

Everyone assures me this will be fine, but I’m going to guess that most of you reading this have more than 30 inches of space in which to move around your bathroom. Go ahead and measure. I’ll wait.

Had the framer not caught it, this 30 inches would have been down to 18 inches, and I would be sidling along crab-style in my bathroom. Lynn and I keep asking ourselves, “How did this happen?” and while I don’t have complete answers, I do have some.

No one else is going to take blame whether I assign it or not, so we’ll just put it back on me. When I drew out our house, on graph paper, I made no allowances for wall thickness. And instead of correcting for that, because the outside dimensions got us to 1700 square feet, which was what we said our budget would allow, walls just got inserted into the interior space.

Maybe you think that would be no big deal, which is I guess what I have assumed all along. But two of the walls in the west third of our house host mechanicals, so they are both six inches deep — that’s one foot. Then there are two other walls, both four inches thick. So 20 inches of space are lost to the studs, and I gather dry-wall adds half-inches, and the zip board is at least that thick: poof! Two feet gone, and it’s come straight out of my bathroom. Well, and the laundry room.

The other piece of the blame I’m going to place on design, because the plans we were given have endless measurements, but not much for lay people. There was nothing clearly spelling out that the bathroom was only going to be four feet wide. (Sounds small when I say it that way, doesn’t it?) And no one studying the plans even noticed until Jered went to put a wall in place and realized that would be non-functional. So there went a foot out of my laundry room, and now I have five whole feet of width in my bathroom, which has to include the depth of the vanity, toilet and shower.

So my tizzy (not today’s dizziness) yesterday of shower research may all have been for naught. Since discovering the concept of a steam shower only Thursday, and learning that it helps people with body aches and sinus issues (that’s me!), I’m interested. One article yesterday warned as a downside that they look very spacelike, but that’s the upside to me. And it sounds like it could save water: I could stand (or sit) in there steaming for 15 minutes on a much smaller amount of water than I use even with a low-flow showerhead.

But it may stick too far out into a very tiny room. The doors swing out, rather than sliding, and there probably would be a little dance required to get both in and out. I already have no idea where the cats’ litterbox is going to live (and don’t say the laundry room — everything in the house is already going in the laundry room); I’m not sure that adding a swing-out door is a great plan.

There is no great plan for this bathroom.

All right, it is many hours later and today the sun is shining, and everyone’s mood is vastly improved. (Solar power of a different sort.) I thought maybe it was just me, yesterday, myself as cold as I could remember, but it turns out to have affected all of us. We are not cloudy-day people here in Gunnison.

We have not solved my bathroom problem, but suggestions have been made. I think it’s still possible to move the closet wall — although Dusty made it clear when he moved the library wall that this was more effectively done before the roof trusses went in place. So perhaps the bedroom closet, which forms the basis for the bathroom wall, could be moved, or trimmed down. Or perhaps I live without the bathtub and get a smaller shower unit.

I think what I need to do is (again, because I already did so once) convey my unhappiness with this bathroom to Dusty and see what viable options exist at this stage of the game. Maybe that means living with 30 inches of movement space in the bathroom. Some people have done with less in their bathroom for longer, so theoretically it’s do-able, but Lynn is also right that I don’t want to start every morning of the rest of my life off unhappy about the way the bathroom turned out.

I’m still a trifle dizzy, all these hours later, but no longer as cranky. So I guess it’s all good.