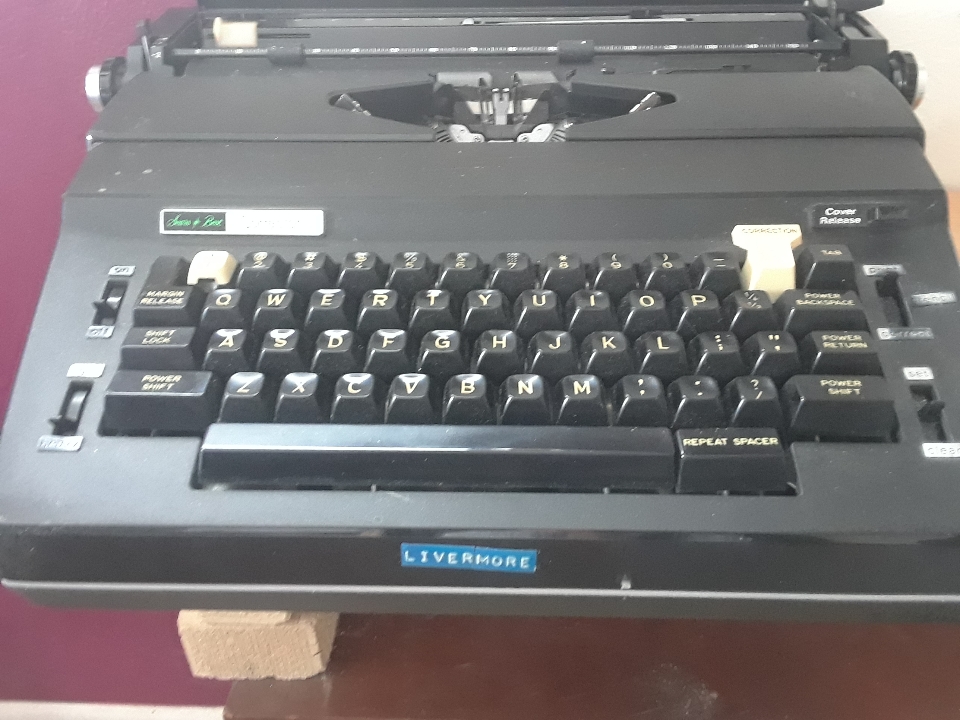 I am in a fervor of indecision this morning, and watching my laptop battery drain without making any blog progress. Na Ki’o is here, firmly ensconced on exactly half of my typing arms, limiting me to five fingers. It might be closer to four fingers — I’m not sure how involved my pinky gets.

I started my typing life in high school, but while many of my classmates took an official typing class, I started under my mother’s tutelage with instructional manuals we had at home. I don’t really recall this going well, and at some point early in the process I abandoned any pretense at official touch typing.

(You should see the number of mistakes I am making while doing this one-handed.)

To this day I watch my fingers and the keys while I am typing. I get away with this because I am usually composing, not transcribing. (All right, I just worked my arm out from under the cat, and he left in disgust.)

I have always (well, not in high school, but since I started typing for a living back in 1984 as a newspaper reporter) had people tell me I type fast, based on what they hear. It’s easier to sound fast on a computer keyboard, because all the corrections I make still sound like part of the typing.

At some point I had a computer that came with “Mario Teaches Typing,” and the little guy from some popular early video game — the name escapes me (just Mario?) — would jump and leap while the screen told you what letters to type. I think my score always came in the 60s: I was typing that many words per minute. That doesn’t seem that fast to me.

I did take an official typing test once, many years ago, up at Western Not State Not College, but now I can’t remember my score. I do remember thinking it wasn’t as fast as I was sure it would be, although Cheelone Spritzer, who administered the test, seemed to think it was a decent rate.

In high school I once had a paper that was due, and while I had written the paper on time, it needed to be typed — and that I didn’t do on time. So I was up in my room, plunking away on my Sears typewriter, over my lunch hour just before the paper was due. I wasn’t going to be ready on time, and I have no idea if I had a plan, but my mother, who must have been listening to my tortured typing, came upstairs, shoved me out of the way, and hammered out the remainder of my paper.

This may have been the same paper that Jeff Ruffe was working on at his house two doors up the street. When he got out of his VW bug at the school, however, the paper fell out of the car and into a mud puddle. He brought the soggy pages in to the teacher and said, “Here,” dumping it on her desk, because he was over his effort to bring a neat paper in on time.

I obviously didn’t learn my lesson, because during my senior year in college I was frantically typing away up against deadline (again, paper written, not typed) when the power in my house went out. There was a manual typewriter downstairs in that house, so I switched, changing the point size and font, mid-paper. And then the power came back on, and because the electric was faster, I went back upstairs and finished the paper. It clearly wasn’t my most beautiful work, although by then I may have figured out that not all my teachers read all my papers.

(In one hand-written paper for a class taught by a probably over-worked graduate student, I did write, “But curiously folks, is anyone really reading this?” It drew no comment, much like every other paper I wrote for that guy — who, although I can’t remember his name and I don’t have much respect for his grading methods, did instill in me an appreciation for literature because his enthusiasm was contagious.)

While I had a typewriter of my own during high school, somewhere along the line my mother acquired an IBM Selectric — and that was love at first touch. I would come up with any excuse I could to type on that, and now I don’t really know why. The keys must have suited my fingers, and maybe I liked the way the text looked, but I really, really loved that machine, and would spend hours putzing around on it.

(You should see the typos I continue to make while working on this post, without the excuse of a cat in the way. I did restart to see if that would stop the incessant repetition of letterssssss that seems to be a new type of typo. And it seems to have worked.)

My job at the Gunnison Country Times came with a desk and a typewriter already on it, with a box of endless yet narrow paper (about eight inches wide) behind the typewriter feeding into it. I would write my story and tear the paper off, and if I need to re-order something, I cut the paper apart and taped it together in the new order.

Then it went to the typesetters, who were working on computer-esque machines. They had glowy screens with keyboards, but you could only see the last five lines of whatever you had typed, and once you were finished, you sent it to some sort of photographic bath that developed/printed the paper/film. And if you hadn’t started with the correct command, no matter how much you had typed, you only got the last five lines and had to start over.

(Na Ki’o has returned to help.)

A few years into it, this entire process was replaced by early Mac computers and a program (Quark Xpress) that did all the formatting for the typesetters, thus rendering that job obsolete. (We still needed a production department to put the pages together, although the software could have done that as well.) Spoiled by the computer at work, I got one at home.

But don’t you worry: I still have my old Sears typewriter. Up until a few years ago I broke it out once a year, to do the company W-2 forms, but now I do that on-line. The ribbon was fading, badly, and while I found a website that offered innumerable ribbons, I couldn’t locate one for my typewriter, which wasn’t even an off-brand or anything. So at the moment it’s probably just a collector’s item or a paperweight. You decide.

Given the number of errors I make anymore (it’s a LOT), it’s probably just as well that I’ve given up typewriters. Mine was a “Corrector” model with built-in correction tape — if I was doing that now all of the white would be used up on this blog entry alone.

Okay, when I set out to address my indecision at the start of this entry, I thought I would be telling you about snow shoveling (perhaps every bit as pedantic as typing), and somehow this went in an entirely different direction. Neither of those directions are the ones I was contemplating while dithering, although I am back right where I started, with a cat firmly ensconced on exactly half my typing arms.

One thought on “Just My Type”