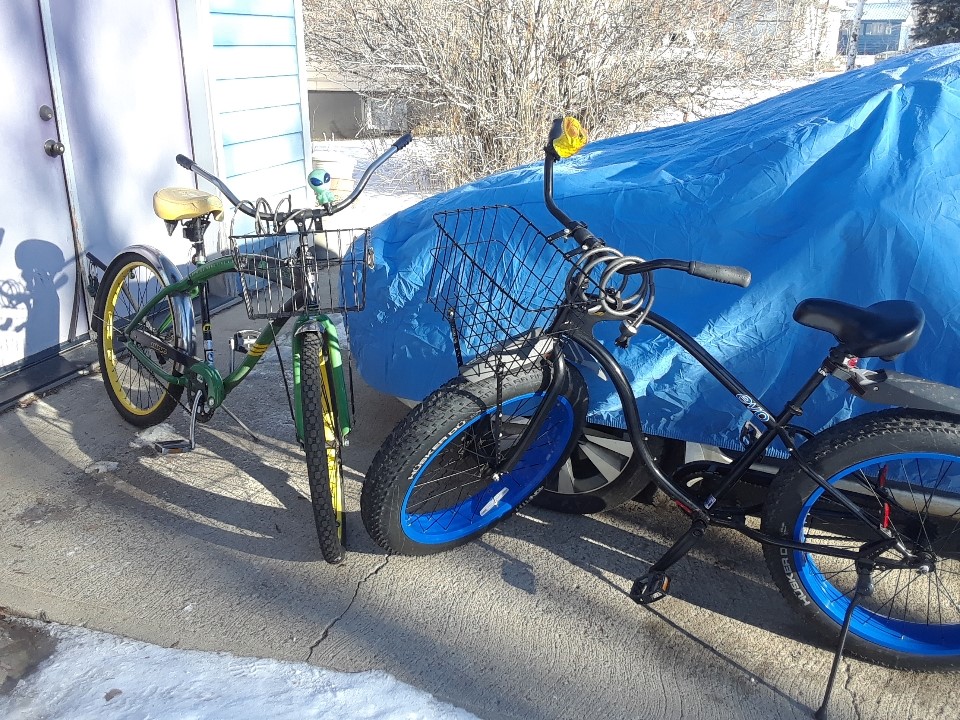 A brief history of my bicycles:

I started on Spike, a blue Stingray with a silver banana seat. (I don’t want to disappoint you, but this was the only bike I named.) At six, while learning to ride in Denver, I slipped and bit my tongue — a scar that lasted decades. At seven in Gunnison, coming down the college hill with Kent Baril on his own bike, we both slid on gravel at the same time. He badly scraped his elbow and knee; I split my chin open and rained blood on everything, including the underside of my ballcap.

In a scenario that would probably appall parents today, an unknown college student scooped me and my bike up in his car, asked and somehow managed to understand my address, drove me home and deposited me on my mom’s couch, across the new carpet (which she was very proud of me for not bleeding on) and then was gone before anyone thought to ask his name.

Four stitches for that one.

Although the most daring I ever got on Spike was clothespinning playing cards to the spokes, this was a very popular bicycle around the neighborhood for the ease and duration of the wheelies that could be popped. Terri and I rode double on Spike for several years, mostly to and from school.

Did I say this was going to be brief?

At some point I graduated to the Sidewinder (its brand name), a white Stingray-type bike with a bright blue banana seat and — this was the cool part– a shifter on the top bar with five speeds. It looked kind of like the shift mechanism in an automatic-transmission car, and it was cool.

I think it was the summer before college when I bought a 10-speed from a co-worker who fixed up old bikes. It was kind of a you-get-what-you-pay for, with a pale green frame that didn’t speak to me, particularly, and brakes that didn’t really work.

I took it to college in Boulder, but there were so many “dismount zones” across campus that the only place to ride it was on the bike path, where fellow cyclists had no compunction about zooming past you, toward you, or cutting you off at speeds that were seriously 20 miles per hour faster than I was going. I brought my bike home and became a pedestrian.

I did ride that bike some when I started at the newspaper, but on one day (and I kind of laugh at myself at how rather pathetic this is now) — a sad day after one young man had inadvertently shot and killed his best friend with an “unloaded” .22, I ended up riding the bike from literally one end of town to the other and back again trying to track down a coach who was close to the boys. It wasn’t just that the distance seemed long (which it did, and that’s why I laugh at myself now), but it cut into a lot of time while I was trying to meet deadline. I started driving to work, because I just never knew where and when I would need to get somewhere in a hurry.

Eventually the bike went away, fading from disuse, probably. And there I remained, bikeless, for many a year.

Until one day — and it remains a matter of small dispute with the folks at Tomichi Cycles  as to just when this was — I spotted a townie in the window of a bike shop. It looked like a John Deere, and it called to me every time I went past until I just went in and bought it. And started riding it.

Prior to purchase, I had thought I would be too tired to want to ride it home at the end of the day, but it turns out I find it very restful and soothing to wind down by pedaling home. That became my main mode of transportation, and I would be sad on the days I would need to drive rather than ride my bike (and riding clear across town became no big deal).

In fact, I drove my car so little that on the day several cars in the neighborhood, including mine, were found with their doors opened (one neighbor lost a stereo, but everyone else was okay) and the police officer was trying to ask me questions about my car, I couldn’t recall the last time I had been in it — it could have been months, even.

For the first several years of my bike-riding Renaissance, I was a fair-weather cyclist. If it looked like rain, I drove. Snow? I drove. Then at some point I finally realized that it takes less than 15 minutes to get to work, and as long as it’s not raining during those 15 minutes, it doesn’t matter what else the weather does. And since it rarely rains continuously, I don’t often get wet. A poncho lives in my backpack and I need it only sparingly.

It also turned out to be no big deal to ride my bike in the winter, unless it was snowing heavily. I did eventually invest in a helmet, because when the roads get rutted, the possibility of falling looms a bit larger.

And then Susan at Tomichi Cycles put me on a “fat bike” and sent me down the really rutted alley behind their store. I test-rode it about six blocks, bashing into every snowdrift I could find and came back sold, sort of.

Fat bikes are called that mostly, I suppose, because they already gave away the name “fat tire,” to describe bikes like my John Deere, with its 2″-wide tires. Although everything about a “fat bike” is wide: not just the 5″ tire, but the frame needed to support it as well. I believe my bike weighs 37 pounds. That’s fat.

The bike Susan put me on cost several thousand dollars, and while I’m a commuter, I’m really not a very good cyclist. I’m slow and don’t particularly enjoy hills. I go down small paved ones here in town, but every time I coast down the college hill I flash back to seven-year-old me, bloodied and getting into a stranger’s car without a second thought.

Plus, my experience with my 10-speed was not a great one, so I told them I needed a fat bike with coaster brakes and single speed. And they found it for me! Susan of the bike shop has referred to it as “cheesy,” but I am quite happy with my winter ride.

I now split the year between my two bikes. May through October I ride my John Deere, and then November through April it’s my fat bike, which I like to think of as “phat.”

Although I have to confess: it seems as though my bike riding skills are getting poorer, or I am getting less brave. I think New Gunnison Winters aren’t helping much either. In these new winters, it doesn’t snow enough for the city to feel the need to plow (and for some reason this year, when they do feel the need to plow, that feeling doesn’t extend to the Palisades), so cars pack it down. Then it warms up enough to start melting, which then freezes overnight until you have these massive swaths of black or rutted ice everywhere.

These roads are actually more hazardous when I am pedestrianing (really? that isn’t a word?), and yesterday I almost went down hard — with no helmet. But since I have yet to find a useful headlight/headlamp/flashlight, I worry about the changing surfaces under tire as I navigate my way home in the dark, and this seems to be making me an overly cautious bike rider, which is probably more hazardous than those daring days when I used to plow uninhibited through fresh powder.

Well, I can see that my short history wasn’t as brief as I imagined. Was it Stephen Hawking who managed to cram the entire history of time into one short book? I am not him.

So you will just have to tune in tomorrow to get to the Point of My Story, which was/is/you never know/ going to be about how my bike life might change at a new address, and how the trail system around Gunnison is shaping up. (And if that doesn’t get you to sign on, I don’t know what will.)

In the meantime, keep on rollin’.