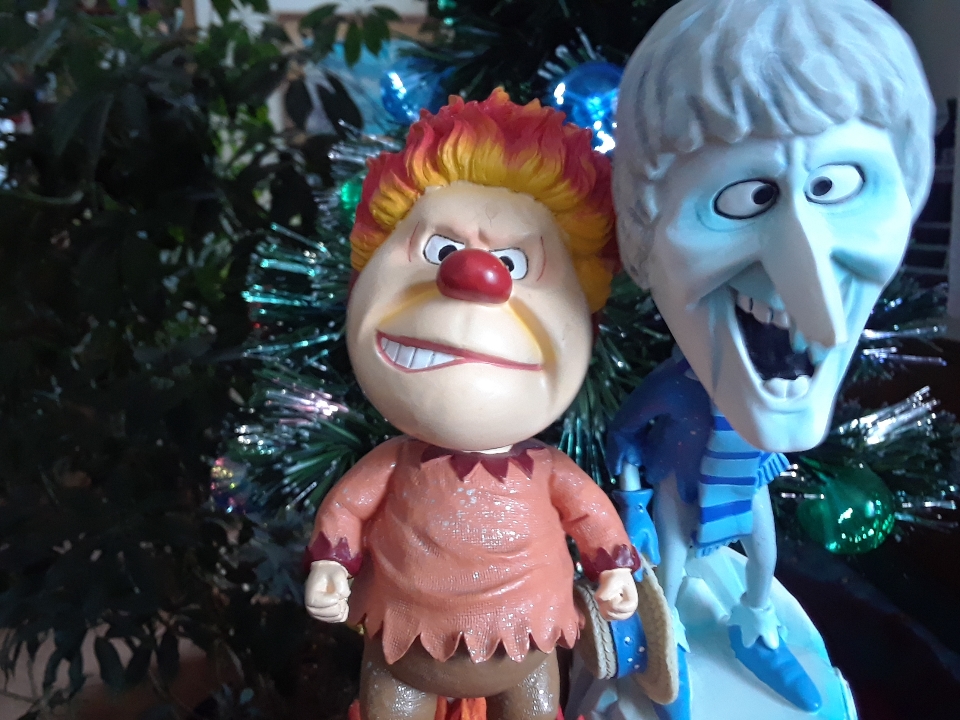 I fell asleep last night trying to watch my favorite holiday show, The Year Without a Santa Claus. I’d already missed out on the first half-hour when I discovered it on AMC, a channel I normally won’t watch because it’s two minutes of show tucked inside eight-minute segments of commercials. But for the Snow Miser, I’ll do just about anything.

Except stay awake, apparently, and while I saw little Vixen in the South Town dog pound, sick and crying, and I did make it through the catchy song about snow in the south, I missed out on the Miser brothers and their toe-tapping ditties. Sound asleep within 10 minutes.

I imagine this story won’t surprise most of you: it’s not a new one. Around here, it happens on a nightly basis.

Back in the old days, my friend Mark used to host Macho Movie Night, and with guns blazing and orange fireballs exploding over my head, in a roomful of macho people, I would fall asleep on his floor.

I can’t even remember what night of the week it was (Monday, maybe?), but Matt and I and whoever wanted to come had what was often called Stupid Movie Night at my house (pre-Lynn). Week by week we would go through an actor’s entire canon, or as much as we could get our hands on. I believe there was some Gene Wilder western we had trouble tracking down, and while you may think Zardoz was Sean Connery’s nadir, you ain’t seen Shalako. (Which was so awful it served as the genesis for Alien Puppet Theatre, perhaps a topic for another day. Okay, definitely a topic for another day.)

We tried the Jodie Foster Collection but didn’t get terribly far, although we made it almost all the way through the Harrison Ford Retrospective. Although you understand that when I say “we” and “made it through,” I mean others watched the movies that played on my VCR while I fell asleep on the couch.

My friend Lisa came to one of these movies, and I was seven-eighths asleep when she noticed and was asking everyone else if they shouldn’t all leave since the host had fallen asleep. “No, this happens every week,” they assured her, and kept on watching.

I can recall the first movie I fell asleep in at the motion picture house, back when we had the Flick/a. It was a Star Trek: The Next Generation movie (First Contact), and there’s a scene where Captain Picard starts flinging model Enterprises around his ready room in front of a character named Lily.

I was watching with Matt (I think it was his first viewing of the movie, my second), and he leaned over and said something, and I didn’t respond. He thought I was silently chastising him for talking during the movie — until I jerked awake a few minutes later.

That’s kind of a funny thing to have in your mental recall, isn’t it? The first movie in the theatre at which you fell asleep?

Lynn is forever wanting me to go to movies with her, even though she watches me fall asleep on the couch every night (it’s a full-contact experience, because I think I kick her a lot as she’s sitting there). The nearest motion-picture palace is in Crested Butte, which I realized — after spending half an hour just trying to get out of a mall parking garage in Denver one Christmas Day after watching some movie with family members — is not that great a distance to city-dwellers. But if I sit in a car for 35 minutes, then sit in a dark theatre, especially if there are going to be orange fireballs, what do you think will happen five minutes after plunking down big money? (I don’t even have any idea what a movie costs — like gasoline, just not a commodity I pay attention to.)

She also wants to rent movies or watch them with her Prime account. Even though she has seen me fall asleep over and over, she somehow thinks This Time Will Be Different.

I don’t really like the fact that I fall asleep the second I stop moving. I’ve tried many things to alleviate this condition, and it’s cut way into many things I used to attend: lectures, concerts and, yes, movies.

I loved movies. If you can recall such a dim time in history, it used to be that television consisted of three broadcast networks and PBS, so there was plenty of time for going to the movies. We didn’t get a lot of movies, here in Gunnison (the summer Star Wars came out, it occupied one of the two bays for probably two months), but I went to many of them.

And then I went to college, where I discovered an entire world of film: old movies, foreign movies, arthouse movies. Did you know you could get college credit just for watching movies? I took classes not only on watching movies, but making them. (I was not a good filmmaker.) There were several opportunities to watch movies around campus, and I especially enjoyed going to silent films (Buster Keaton!) when Hank Troy of Denver would provide live piano accompaniment.

I learned about German Expressionism, and what a “match cut” was (the most classic example: the ape throws a bone into the air, and it becomes the spinning station in 2001: Space Odyssey). I discovered Cary Grant and Doris Day, and learned about the whole line of Barrymores that leads to Drew.  I uncovered much, much more of Orson Welles than a very fat man selling no wine before its time.

I watched very serious movies (Hiroshima, Mon Amour features actual footage of the aftermath of the bomb — it’s horrific), and very silly movies (Charlie Chaplin making his potatoes dance) and lots of genres in between. I made a movie of people tying their shoes, but did my best work when I just took care of the camerawork for a classmate’s written-and-directed-by tale of a man who gets off a bus, gets chased by a camera crew and ends up getting run over by a bus (RTD in Boulder wasn’t very excited about my attempt to get the oncoming shot as the bus runs over the man). I think it’s fairly safe to say, movies were a huge part of my life.

And now I can’t even make it through 10 minutes of my favorite holiday show. (Although I would also like to put in a plug for The Grinch, the real one with Boris Karloff — I got college credit for watching some of his movies.)

I am sad I missed my show (“He’s Mr. Snow Miser, he’s Mr. 10 Below”), although it was the second time this week I’ve seen it on offer, but I don’t know that I miss all these other movies so much.

I see commercials for movies that look good, and write down some of AARP’s “Movies for Grownups” recommendations. There are some I’d like to see in theatres that I wait for Lynn to buy the DVD (Minions, mostly, and we both very much enjoyed Sing!), so that I can watch in pieces if I need to, but really, I just don’t watch movies anymore. Harrison Ford has gone on to build an entire swath of work since his Retrospective ended, and I don’t think I’ve seen a one of them.

I wish I could tell you I’m using this freed-up time for some higher purpose, but I’m not. Just sleeping. Although at least now I’m blogging, so that feels like something. Although I notice it’s very full of I I I (skim all the paragraphs above to see how most of them start), so it’s very kind of you to keep reading.

And here’s your Snow Miser weather word: today’s 10% chance of snow was a light flurry earlier, followed by a few token flakes just a few minutes ago, but the sky remains heavily overcast and not friendly for my recently re-activated solar panels.

2 thoughts on “A Miserly View of the Movies”