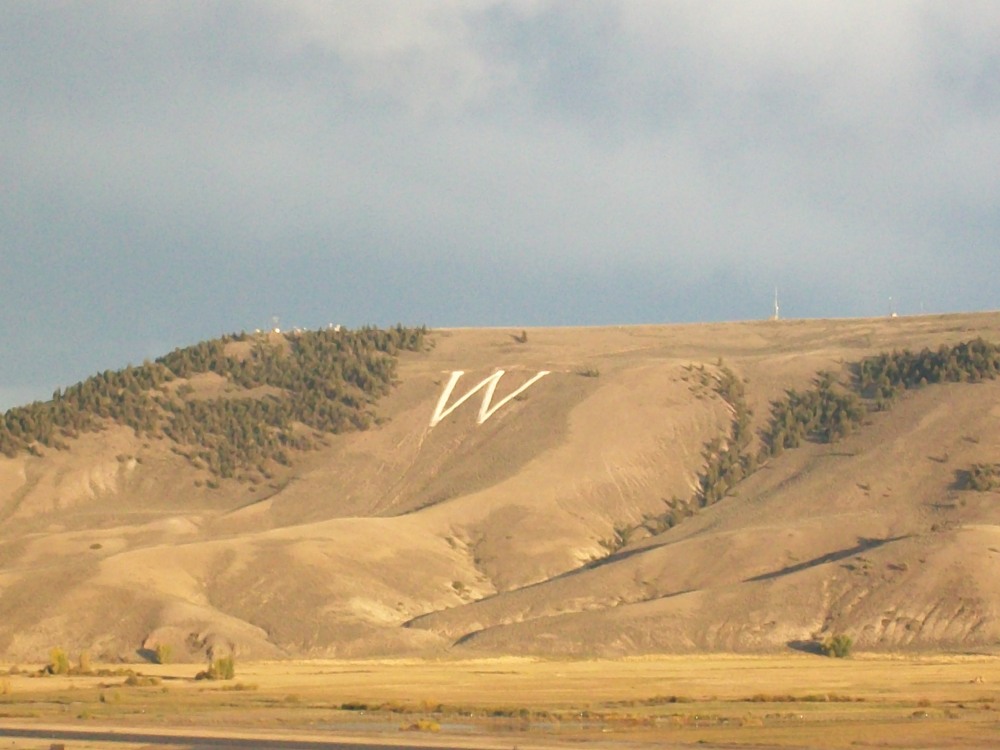 Here’s a fun fact you don’t know about me and Heath Noxon: when I was growing up on Tincup Drive, I lived directly across the street from his paternal grandparents, Bill and Coco Noxon. Then, when I bought this house on Irwin Street, I moved in next to his maternal grandparents, Paul and Lucy Trujillo.

The last time I saw Heath, he and his wife had recently become parents, and with time passing the way it does, it’s entirely possible Heath is now a grandparent himself. (Hopefully not really — that would make me spectacularly old.)

As you know, all this living has happened in Gunnison, home to a school responsible for the giant W on a hillside just southeast of town. Before the giant W, there was no “W” in the name: Colorado State Normal School. I have never understood how “normal” equates to “education,” since it was primarily a place to educate would-be teachers, but it’s probably better than being the state’s abnormal school.

No matter its name, that’s how the Livermores came to be in Gunnison: my dad got his first and only teaching job with the history department. So we moved to Tincup Drive, between the Bartlesons (geology) and Barils (English), and a few years into it, across from the Noxons (football).

Then the Bartlesons got divorced, and Micki and her two daughters sold the house and moved to the Boulder area (where they served as my failsafe during my college years). Their house was bought by Duane Vandenbusche (history), who rented it out to college students, usually female athletes.

A couple of skiers from those early years stayed in town, got married and had kids, and I still see them from time to time. (Funnily enough, we all ended up working at the airport.) The skiers gave way to track and field personnel, and I remember one winter when Tia and I helped a sprinter named Kelly move her roommate’s VW bug (because it was interfering with winter plowing). We didn’t have the key, so we pushed and pulled and even lifted the back end until we got it out of the way.

In the summer Vandenbusche would install first his parents and later his sister and her family in the house to clean and maintain it. I clearly remember the summer when his mother was appalled at the state the house was left in (it didn’t take long to figure out where Vandenbusche got his booming voice), and she declared: No more girls. So then we got boys, an experiment that lasted only a couple of years.

And then my mom and John sold our Tincup Drive house for their peripatetic life of Forest Service service, and a few years later I landed on Irwin, just around the corner from Tincup but with a dearth of college-related neighbors. One on side, as mentioned, were the Trujillos; on the other was the Abrams family, and across was the Hoots family.

Then — see if this sounds familiar — the Abramses got divorced, and Donna and her two daughters sold the house, which went as a college rental. I never met the owner or his son or any of the college boys who passed through there for something like eight years. One year they set up a skateboard halfpipe in the garage (I have no idea how they didn’t all smash their skulls), but really the only time a group annoyed me was the summer they set up endless, all-night poker parties in the covered patio in the back, with a direct line of sound to my bedroom window.

Nevertheless, I wasn’t really sad when the college dad, whose son had long graduated, finally sold the house to a family. Neighborhoods are rarely static, however, and shortly after college boys went away and Mr. Trujillo died, his daughters decided to sell the house and move Mrs. Trujillo to a senior apartment.

I would just like to say, I loved having the Trujillos as neighbors — although probably not as much as my dog Reprieve. I came home one morning to find an entire plate of breakfast — eggs, sausage, toast, the works — waiting on the ground for the dog. If ants hadn’t made it onto the plate, it might have gone into my refrigerator. No one in the world could make a sopapilla — bunelos, with a tilde I don’t know how to install over the N — like Mrs. Trujillo. She would make a pot of beans, and then I would stuff the bunelos with the beans. Oh my gosh was that amazing.

So Mrs. Trujillo moved, and the house sold to Jake’s dad. Jake was a college student with a lot of roommates and even more dogs. I believe Jake’s dad was a contractor, and I kind of think this was supposed to be Jake’s first project. He did manage a fence for the backyard, to sort of hold the dog pack, but that’s about as far as it went.

And even though Jake is long graduated, his dad still owns the house, and there has been an endless procession of boys (and dogs, including a pit bull that got shot and killed by a cop as it was menacing multiple neighbors) through there. We don’t meet most of them, although other than the ugly young man with his vicious dog, there really haven’t been problems.

Except — and I would like someone to explain this to me — no matter how many times the boys change, there are three constants (four if you count the dogs, although I don’t think this year’s set has any beyond one regular visitor): they run a makeshift auto body shop out of the garage; there are lots of snowmobiles; and the responsible kid who has early morning classes and/or a job has an old, mufflerless car that needs to idle for upwards of half an hour.

How do you suppose this happens, year after reliable year? It’s a guarantee that at 7 a.m. the ancient car is going to snarl to life and then huff and puff mightily until it drives away somewhere around 7:30. Different boy, different car: exact same scenario. Maybe it’s in the lease.

Someday, I imagine, this is all going to come to an end, and the likelihood of living next to college students will lessen substantially (although the owner of our title company speculated that our unmet next-door neighbors to be, who closed on their Riverwalk lot in August, might be planning a short-term rental. I believe that’s against the covenants, which I hope the new neighbors-to-be read carefully prior to purchase).

When we go to sell this house, I am hoping it will be to a family. I imagine many of our neighbors are hoping for that as well. That’s no guarantee of peace: Abramses’ old house now belongs to a family of eight, and they’re neither shy nor retiring. But it does help mitigate the transience of neighbors, even if some of their habits stay behind.

I borrowed this picture of Tenderfoot (or W) Mountain from Wikipedia. Mr. Krabs has a whole theory of borrowing on SpongeBob, so this clearly absolves me from any criminal intent or responsibility.