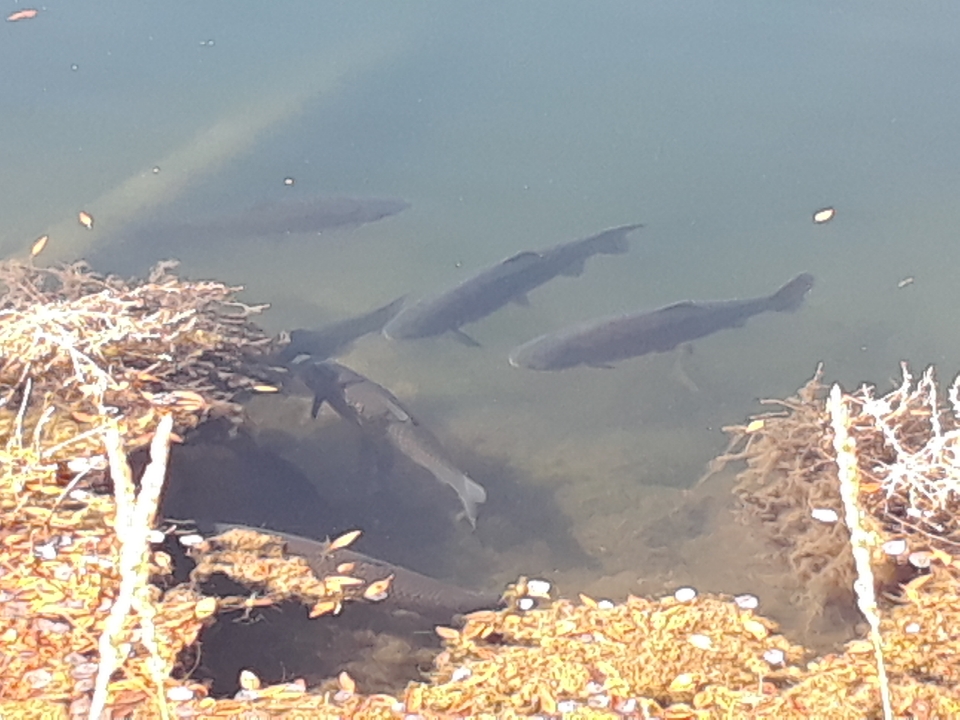 Yesterday was kind of a disappointing day.

Lynn goes past the lot twice a day on her way to work in the metropolis of Almont (which turns out to be more thriving than I would have imagined, at least at the Post Office), and then she and Oz usually take their evening constitutional around Riverwalk. So she’s been providing updates, or non-updates, because I don’t usually get out there with Oz until Saturday mornings.

So while Lynn had been reporting that no forms for concrete were in place, and she hasn’t seen much activity over the last couple days, I only saw that for myself yesterday. Blankies still in place, and a trench from the south with a thick electrical cable in it. Of course, all the other utilities are going to come from the north, so our new lot is going to have scars all over it.

And then after Oz and I checked out the turgid fish in the pond, which is starting to develop a skin of ice, we started down Kokanee, which for some reason was called a “court” when it’s the longest of the three roads in the subdivision. It does end in a tight little turnaround, but there’s nothing courtlike about this street.

Two other houses are getting started at Riverwalk, so with ours it means a 30 percent increase in human habitation out there. While I fret about our timeline, one of these was supposed to have been built in 2017 — suggesting I really have nothing to complain about.

But yesterday, while absolutely nothing but slow-moving fish could be seen at our lot, a full crew was putting plywood on the roof trusses at one house, while another crew was setting forms for concrete and putting on even more blankies for the foundation at the other house.

That house a week ago seemed like it was just barely ahead of us; now they have a well and forms.

I know it was a Saturday, but I also wondered what these two crews knew. Do you grab nice days when you can get them this time of year? Trying to get a little ahead of a short holiday week? The contractor for one of these houses is Angelo Archuleta, whom I’ve known most of his life, but I didn’t see him to ask (they were all up high in the air wielding hammers or nail guns), so Oz and I turned around and went back to our sad little lot, devoid of activity.

I don’t think we’re getting concrete the day before Thanksgiving, which was the plan. I don’t know when we get our well, or even where it’s going to go.

I did see a plaque with the number 60, but even that depressed me yesterday. Our lot is still in the throes of an identity crisis, about as serious as the day SpongeBob put his shirt on backwards and couldn’t find his nametag, thus losing his sense of self.

I probably mentioned it somewhere already, but when we bought the lot, we were told we were 142 Riverwalk Drive. I liked this, because the house I grew up in was 412 Tincup Drive. Same numerals, both drives . . . good omens. [The older I get, the more apparent the idyll of my childhood becomes — a subject for another day, perhaps.]

Not until the building permit phase did we learn the county had decided to re-number our lot. I don’t know when they did this, and why the county didn’t feel it necessary to notify lot owners, but suddenly we were at 60. Lynn pointed out our current address is 15, and four times 15 gets one to 60, and it’s also her birth year (although it’s probably not polite to point out a person’s age).

But then we made our first trip to Gunnison County Electric Association, only to learn their map has our lot as #42 Riverwalk Dr. I have not yet called anyone at the county to clarify. Apparently Road and Bridge is responsible for addresses, but how many people do you suppose I’ll have to talk to before I get a definitive answer?

The GCEA trip was kind of disappointing too, in that we went to get an itemized list of costs for our hook-up, which we never got, and their charge was $200 more than our contractor budgeted. I’m afraid I see that being a constant theme in this project, and being over budget causes me a great deal of stress. I have managed to pay cash for almost everything as I’ve gone through life, both at home and work, and suddenly that’s not the case in either place, and my cortisol levels are revving at maximum.

I should try that dog-living-in-the-moment thing: it will get done when it gets done. It will cost what it costs. (Although I kind of think that’s the attitude you only take when your budget is endless.) I should just go for more evening walks with Lynn in our new neighborhood and hear all kinds of odd squeaks and squeals, and finally look up to see an owl perched at the top of a naked cottonwood, holding a lively conversation with an unseen (but heard) compatriot across the world’s longest “court.”

It will be all right. I hope.

One thought on “Gone Fishin’”