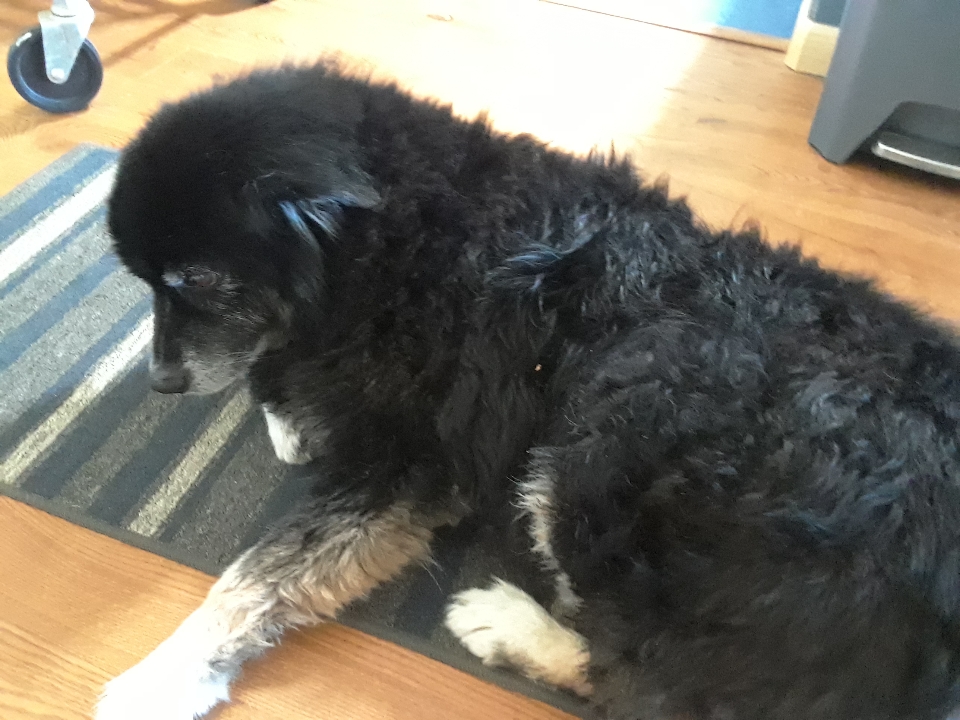 You have no idea how many times I feel, without ever having devoted much time to watching the show, like — I was going to say Eddie Albert, but maybe it’s Eva Gabor — on Green Acres.

Maybe I mean Eddie. He was the one who wanted to live on the farm; he just wasn’t very talented at it. But I could mean Eva, who longed for her penthouse. All I know is, I don’t appear to be much suited for the country life.

One of my several friends named Mark, this one a poet, has a verse that I believe ends “as we try to walk a country mile,” about him and his horse, a thoroughbred rather than a standard-issue quarter horse like his rancher neighbors own. Mark, who once commuted across Dallas to earn his keep, had met and married Kym, a lifelong horsewoman with a place out in Doyleville, which you’re not going to find on many maps but which exists, sort of, half an hour east of Gunnison, and he and Rigby had to work very hard to fit in.

Mark has just retired from his job teaching poemming to students at Western Not State, and he and Kym are packing up to begin life anew in a place in Montana that might be more of a “city” than Doyleville, but only by a store and post office or so. But it’s near Kym’s kids, and at retirement age, that’s what counts.

They are having a pre-fab house put together for them, and the other night on the phone Kym expressed hope that they might be able to have a couple of mouse-free years in the new construction, even if she’s sure it’s just a matter of time before the mice come calling.

Which I thought about yesterday when I found a dead member of the species in an outside water dish. While I am well-versed in outdoor mice, and even named one (Fats Sugartooth) who lived where I worked at Bartsches’ gas station, I haven’t ever been particularly communal with them. And don’t want to be, either.

I should also note that Pat’s, which had mice in its previous iteration across the street (cousins of Fat’s who helped themselves to my stash of snacks), has not encountered rodentia of the first kind at the “new” location of 17 years, but several other small fauna who come through the open door find life at Pat’s friendly and more hospitable than on the street. Kara will give them a name (the last chipmunk: Sparky) before trapping them and setting them loose, generally on the Western Not State campus. You’re welcome, students.

So you would think I would learn some basic country-living lessons, wouldn’t you, like maybe that it’s not such a great idea to throw doors wide open as I always have in my non-penthouse non-apartments in town?

Although so far the problem hasn’t been so much with in-bound traffic as the outflow. And by outflow I mean Oz.

If you’ll recall, the last time I left the front door open in the morning he went tearing out to cavort with a guest dog passing by, and then vanished. I have to confess, when I opened the door this morning because I was tired of playing the In-Out Game with not one but two cats, the possibility of skunks passing by did not occur to me.

Skunks are fall animals, creatures of the night. But this one apparently didn’t pause to read the manual, and was out on a bright sushiney May morning. A morning in which my new hummingbird feeders, which aren’t working so far (Kym and Mark assured me if I cultivate hummingbirds I can reduce the mosquito pestilence that infests this particular part of the world most of the summer, but I’m only aware of one fly-by and no takers), looked really sickly until I went out to the deck and realized the liquid had frozen solid. Eighty degrees in my car two days ago, and cold enough overnight for a hard freeze. Welcome to Gunnison.

So, while I was busy this morning tending to the demands of a cat, and I don’t remember which one nor what the demand was, I suddenly smelled an acrid odor and turned around to find Oz, fresh from having dunked his entire face in the fountain they all drink from. I immediately pushed him back outside and went looking for my skunk-mitigation supplies.

I located some ancient baking soda, one of two industrial-sized bottles of hydrogen peroxide, and Dawn dish soap, a mixing bowl, some old towels, my new steam shower, a call to the chiropractor for the third consecutive month to postpone my appointment (he’s going to quit scheduling me, as unreliable as I’ve become) . . . I was mostly ready, so I opened the door to bring Oz in. And he was gone. Up where the driveway meets the road, however, was another black and white object — a skunk on the move.

My mother had just called, but I hung up on her (I did tell her why) and went out to holler for Oz, fearful that one chase of the skunk wasn’t enough and that he was on the hunt again.

I still don’t know where he was. I pulled my bike out and went looking, also with an eye out for the skunk, who with my luck has decided to make its summer home in our front yard. Other than missing dogs and present skunks, it was a nice morning for a bike ride. I’ve got to figure out something for riding my bike more often.

Oz materialized as I turned back into the drive after scouring the neighborhood. But I still left him outside to make final preparations, and he disappeared once again. I have no idea where he kept going, and can only hope it didn’t involve further interactions with a skunk.

I have to say, although I don’t know how much the bathtubs jets appreciate it, that bathing Oz in the steam shower was far easier and went much more smoothly than at the in-town non-penthouse, which also didn’t come with a butler to do things like dog-washing. (Probably I’m not much like Eva after all.)

Even though I had filled the tub and brought a cup for dog-dousing, a hand-wand rendered both those unnecessary. I think the clear glass walls made him feel less trapped, and while it perhaps did nothing for him, I found the classical radio quite soothing. At any rate, for the first time in our bath history together, he did not dig his claws into the tops of my feet, so I’m counting this as a win.

The only thing remaining is to take him down to work, where Kara, out of precautionary quarantine for the first time in seven days, will celebrate her return to the shop by smelling my dog and letting me know if the bath was successful.

Yep, this is the life for me all right. I can tell you’re jealous, you and Eddie Albert, at my easy adaptability.