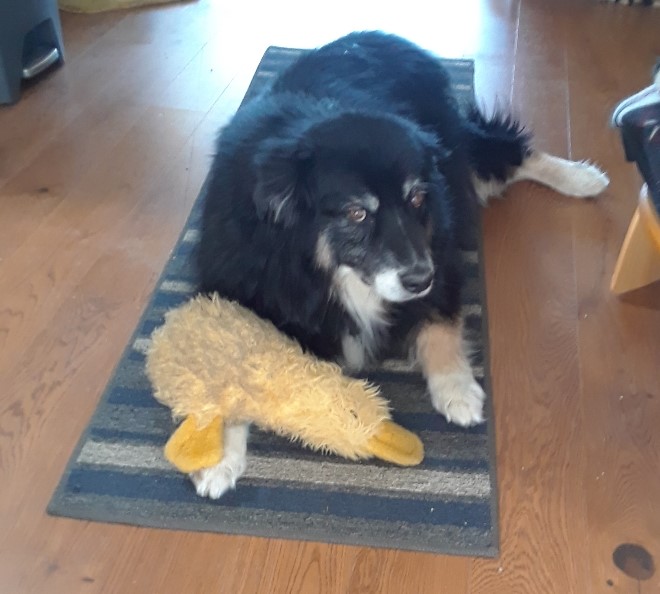 Up until now, I’ve never had a dog that liked toys, much. Sometimes a ball, although Ashoka was the first to actually fetch it and not just run around and want to be chased while holding it in her mouth. And then came Ozzie, for whom I bought several toys, none of which he liked. Until the duck.

I didn’t buy him the duck, my sister Tia did. And while he had looked askance, if he looked at all, at every toy I brought into the house, he stood there quite expectantly while I unwrapped the duck, which had arrived in the mail. As soon as it was open, boldly assuming it was his, he snatched it out of my hand and he has since carted it all over two houses on a daily basis.

Tia later sent him an alien, which sees some playtime, and then he started liking the toys I bought for him, most notably a penguin. But he often defaults back to the duck, which is now gross and disgusting and once had to be sewed back together by Gilly.

Sometimes he lies with the duck between his paws, or he rests his head on it, but what he really likes to do is pick it up and shake it like he’s trying to rip its head off. If he was putting real effort into it, it would have been nothing but stuffing a long time ago, so it’s clearly just play, but he does often seem like he’s trying to make a meal of it.

He particularly does this as I’m making my morning motions that mean we’re getting close to going outside, like running water through my nose and putting shoes on. I know what my rituals mean; I’m less sure about his. Maybe it’s just excitement that we’re getting ready to go on the prowl.

One day, as I opened the door, he picked up his penguin and refused to drop it. So we headed off to work, him with his treasured penguin clenched firmly in his teeth. This was back on Irwin, and we got halfway to work before either his jaw got tired or he was over it. At which point he dropped his penguin and went on without it, not so much as a backward glance or any concern that he was leaving one of his favorite toys in the middle of an alley halfway between his spots of home and work.

I rescued it and carried it the rest of the way to work for him, and he seems happy enough to find and cart it around the house, but I’m still uncertain as to the nature of his relationship with his toys, particularly his duck.

Are they simply playthings? Items of comfort, to chew and hold and sleep on? Stand-ins for the wilding creatures who drive him so wild, chipmunks and squirrels, skunks, birds, racoons and especially foxes? But he goes after foxes, who easily outrun him, with far more ferocity than he shows to his toys.

People, who sometimes but not always chew on their stuffed animals, seem to view soft, cuddly things like stuffed animals or pets as objects of comfort. Things to turn to in times of crisis. Times like now.

I saw a clip of an animal shelter somewhere, all the employees and volunteers celebrating because every last kennel was empty, every dog and cat with a new home. I am hoping people understand this is a long-term commitment, and that they don’t just dump all their new friends back on the shelters once the crisis has passed. Which, since it’s not going to be a short-term crisis, may give people more time to bond with their new pets. Or, conversely, decide they aren’t a dog or cat person after all. I just hope it works out for all adopters and adoptees.

Gilly, my most social co-worker, has been doing her work after hours, when no one else is present. Yesterday, as we crossed evening paths, I had Oz with me, and I wasn’t sure Gilly was going to let him go. She has a house full of cats, but she loves loves Oz, who returns the feeling (she gives him cheese and dog snacks as well as lots of love), and she hasn’t seen him in weeks.

She couldn’t stop touching him, he no respecter of the six-foot rule, and it just brought home in a small but loud way how different everything is these days. You can intellectualize it all you want, explain it to yourself, talk it over with friends and family, but this is just plain wrong.

I mean, it’s not wrong in terms of what we ought to be doing to try to contain this awful virus, the effects of which seem to get worse every time we learn a bit more about it. But in terms of how we usually live and interact, despite the preponderance of people who thought they were already doing their socializing via media and gaming platforms, this is just flat-out wrong.

There was a funeral, of a sort, in town yesterday. For a 19-year-old who died in a car accident. No alcohol or drugs, he was on his way to work, perhaps driving fast, perhaps some fog, possibly some ice . . . he ended upside down in the East River, where he drowned.

One of Lynn’s co-workers was quite close to this young man, her son’s best friend, and what an awful time to be in that position. Solace from six feet away probably isn’t solace to either the giver or the recipient. The funeral was a drive-by: every household in its own respective car, starting from west of town and processing east to the cemetery — do not get out of your car. It was a very long line of cars.

To not have people to literally lean on, no matter how figuratively they are there, that makes this especially cruel. Lynn’s co-worker can probably be there in full force for her son, but not the family of his friend, with this horrible acute loss that has nothing — and yet everything — to do with a virus.

While I don’t understand Oz’s relationship with his duck, I know the duck is his favorite and it holds some certain meaning to him. We all need our own duck talismans right now, something that asks absolutely nothing of us but gives us a little comfort in a long dark night.